Campus mask requirement on hold over concern for athletes 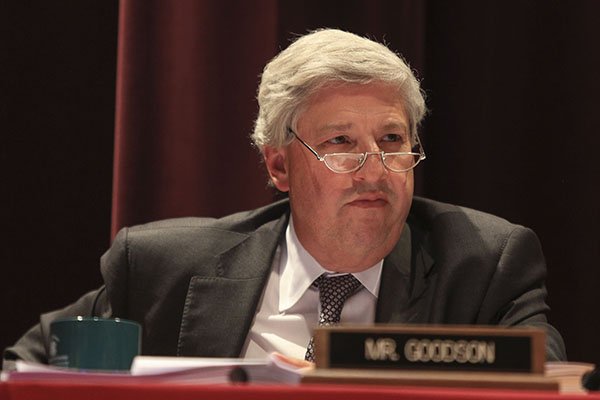 University of Arkansas System Board of Trustees member John Goodson is shown during a meeting Tuesday, Sept. 7, 2016, in Little Rock.

FAYETTEVILLE — A proposal to require people to wear masks on University of Arkansas System campus’ common spaces was scuttled Wednesday after a trustee said he was concerned the rule would prevent the Razorbacks football team — and other sports teams — from practicing.

Trustees passed over the item with the intention of revisiting it at their next meeting in July.

For several minutes, trustees discussed whether the resolution, as written, should cover campus visitors and if it should be considered the bare minimum requirement for campuses, in case a chancellor wanted to impose more stringent requirements.

But consideration of the proposal suddenly stopped after Chairman John Goodson said it threatened schools’ plans to resume athletics.

“If we passed this, I’m not sure our football team could practice,” he said.

The resolution wasn’t formally tabled but was left to be tweaked by system administration to cover campus visitors, make the mask requirements minimum requirements and to add language that would allow student-athletes to practice contact sports.

It was unclear Wednesday afternoon how the resolution would be altered, if student-athletes would be required to wear masks at all during play, or whether student-athletes could end up at greater risk for contracting the virus than other students based on any language added.

“We are going to have to take some time to digest some of the productive discussion and feedback from today and come back with a resolution that provides some greater clarity,” System spokesman Nate Hinkel said.

College athletes across Arkansas and the country are being tested for covid-19 as they to return to campus, and many have tested positive. Those who test positive are isolated from teammates to reduce exposure.

The resolution, as worded prior to Wednesday’s meeting, read: “each campus, division and unit to adopt a policy that encourages physical distancing on campus and requires the use of cloth face coverings by students, faculty and staff in university facilities where physical distancing is not possible in accordance with current guidance from state and federal health officials.”

Trustees also listened to four system chancellors detail their plans to open or the discussions they’ve had so far in forming their plans to do so. Mask wearing and availability were consistently a priority for chancellors, while enforcement of the requirement remained in question.

University of Arkansas-Pulaski Technical College Chancellor Margaret Ellibee said employees were wary of enforcing the requirements. Employees can model safer behavior, she said. They may instead hand a mask to another person on campus and explain the public health benefit of wearing it.

“At this point,” Ellibee said, “I think that’s the very best we can do.”

Chancellors plan to provide employees and students with equipment, such as masks and hand sanitizer, to protect themselves.

In Fayetteville and Pine Bluff, home to two of the system’s five traditional four-year universities, the city councils passed measures this week to require face masks in public.

Trustee Stephen Broughton, a Pine Bluff doctor, wondered whether the ordinance would compel the university to adopt it as its own minimum mask standards, but System General Counsel JoAnn Maxey said she didn’t believe it would.

Other consistent plans from chancellors included making covid-19 tests available for students and employees and tracing the contacts of any infected person.

People could first go to the student health center at UA, Steinmetz said, and the University of Arkansas at Pine Bluff is working with Jefferson Regional Medical Center on a plan to make testing available, Chancellor Laurence Alexander said.

Earlier Wednesday, trustees approved directing campus leaders to consider modifying their academic calendars to minimize the potential for students, faculty or staff to travel and then return to campus, which can increase the potential of a covid-19 outbreak. That could be by forgoing fall break or doing remote instruction after Thanksgiving.

The University of Arkansas has moved its two-day fall break to the Thanksgiving break and will decide in early October whether to go to remote instruction after that, Steinmetz told trustees.

Other campuses, such as Arkansas Tech University and Louisiana State University, have already decided to transition to remote instruction after Thanksgiving.