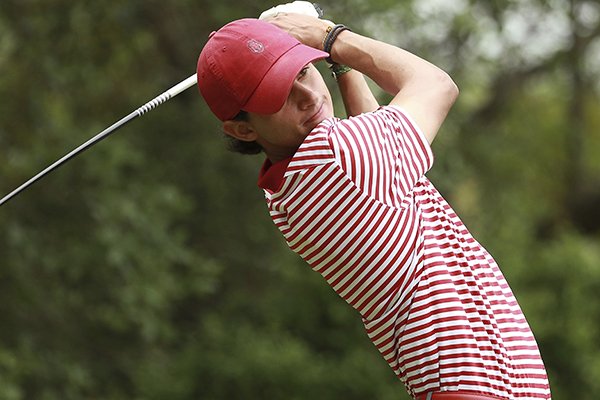 Luis Garza of Arkansas hits a tee shot during the Valspar Collegiate Invitational at the Floridian on Monday, March 18, 2019, in Palm City, Florida (AP Photo/Scott Halleran)

A player must be a sophomore or beyond with a stroke average of less than 76 and a minimum cumulative grade-point average of 3.2 while participating in at least 40 percent of his team’s competitive rounds.

Garza shot a pair of season-low 67s this spring, leading to 21st at the Bearcat Invitational and 25th at the White Sands Intercollegiate.

Overstreet graduated from Arkansas with a 3.89 GPA with a degree in business finance and a 71.46 2020 stroke average.

The Kingfisher, Okla., native is a two-time SEC men’s golf Scholar-Athlete of the Year and is the UA’s nominee for the SEC’s H. Boyd McWhorter Scholar-Athlete post-graduate scholarship.

A four-time SEC Academic Honor Roll pick, Overstreet has posted a 4.0 in five different semesters and has only four career Bs on his transcript.