4-star Nick Smith has memorable week as offers pour in 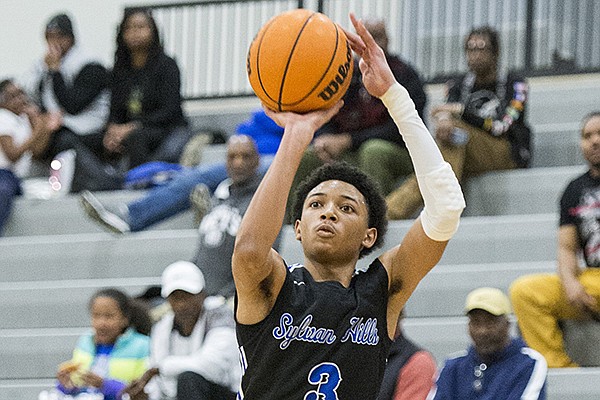 Sylvan Hills junior shooting guard Nick Smith Jr., an ESPN 4-star prospect, had quite the week as he added six more scholarship offers to his resume.

“It’s been crazy and fun,” Smith said. “I get to talk to the coaches I want to talk to and get to experience the things I’ve been dreaming about.”

Smith, 6-5, 176 pounds, added offers from Auburn, Georgetown, Alabama, St. Louis, Kansas State and Murray State this week to go along with seven others from schools such as Arkansas, Texas, Florida, Ole Miss, St. John’s and others.

The new offers coincide with this week being the first time college coaches could directly communicate with 2022 prospects. Coaches were able to make contact at 12:01 a.m. on Monday.

Arkansas' staff was one of the first to reach out to Smith.

“They was just asking me how I was doing and want to continue this relationship we have and told me they were going to recruit me hard,” Smith said.

ESPN rates Smith the No. 12 shooting guard and No. 53 overall prospect in the nation for the 2022 class. He is also the No. 1 recruit in the state.

Smith said Auburn, Alabama, Georgetown and Kansas State caught his attention most of the schools that offered since Monday.

Having no spring and summer basketball because of the coronavirus pandemic has been a setback for Smith and other prospects, but he is trying to turn a negative into a positive by working on some of the weaknesses.

“I’ve been focusing more on my ball-handling lately,” said Smith, who was expected to play for Bradley Beal Elite on the Nike EYBL circuit. “I need to get them tight to where I can just use combos and pull up from anywhere.”

He was named the Arkansas Democrat-Gazette’s Underclassman of the Year after averaging 21.3 points, 3 rebounds and 3 steals per game as a sophomore. He scored a season-high 45 points against Pine Bluff.

Smith shot 52 percent on two-point attempts, 35 percent beyond the 3-point line and 85 percent from the free throw line.

Smith is one of five 2022 in-state prospects with an offer from Arkansas. The state has numerous others with Division I offers. He’s proud to be part of a class that is likely to be one of the best the state has ever produced.

“The 2022 class is a special in-state class,” he said. “Very proud. Grew up playing against all of them and we're just now getting started.”

Being able to talk to several of the college coaches he grew up watching on TV has been a surreal experience.

“It’s crazy because me growing up, I said I was going to college and playing basketball, but I never really thought I would have a chance to or someone even recognizing my skill,” Smith said. “I just had to go to the right people for that to happen.”