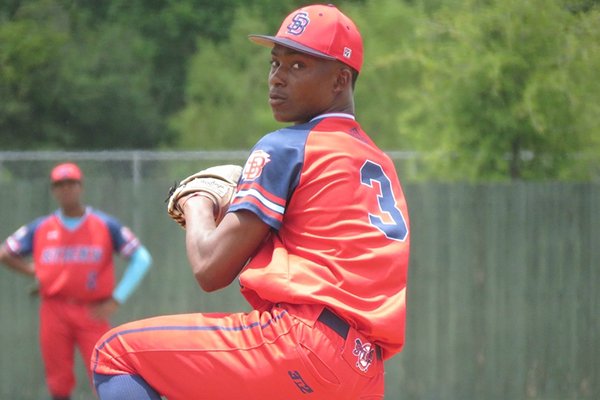 Markevian Hence of Watson Chapel, shown while pitching for the Arkansas Sticks, is one of the Razorbacks' highest-rated signees in the class of 2020.

Hence, a right hander from Watson Chapel High School in Pine Bluff, was drafted 63rd overall by the Cardinals in the Competitive Balance B portion of the second round on June 11. He signed for $1.115 million, according to Jim Callis of MLB.com, slightly more than his suggested $1.08 million slot value.

"After much consideration of what is best for my baseball career, I have decided to sign with the St. Louis Cardinals and make one of my dreams come true," Hence wrote on Twitter. "I definitely would like to thank Coach (Dave) Van Horn and the Razorbacks coaching staff for believing in me and recruiting me to play at the collegiate level. As I start my new chapter with the Cardinals, I will never forget the best fans of college baseball in the world in Fayetteville, Arkansas, and I will always be a Razorback.”

The Cardinals had more than $1.5 million remaining in their bonus pool to sign Hence and their fourth-round selection, right-handed pitcher Ian Bedell of Missouri. The organization could spend more than that amount to sign the two remaining players, but would be subject to taxes on the overage.

Hence is the second Arkansas signee to sign with the Cardinals in as many days. Masyn Winn, a right-handed pitcher and shortstop from Kingwood High School near Houston, signed with the Cardinals on Wednesday for a reported $2.1 million.

The Razorbacks are also expected to lose a third signee, outfielder David Calabrese, to professional baseball. Calabrese, who is from Canada, was drafted 82nd overall by the Los Angeles Angels.