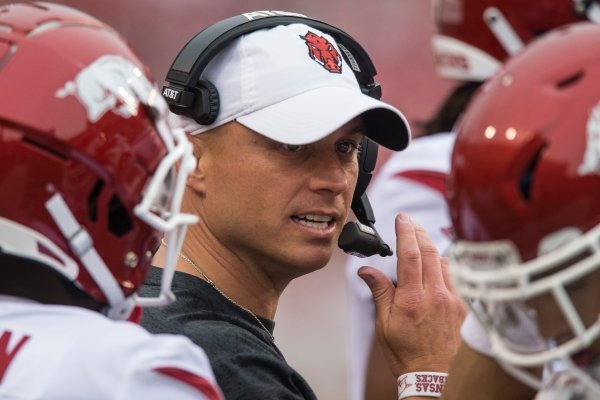 Going into his third year on the University of Arkansas football staff, receivers coach Justin Stepp has earned the reputation of being an excellent recruiter.

Jackson plans to make an unofficial visit to Fayetteville on March 7.

"I have a high level of interest," Jackson said. "Coach Stepp shows a lot of interest in me. He keeps up with me. He texts me every day making sure I'm good."

Stepp is looking forward to getting Jackson on campus.

"He tells me it's a nice place. If I come, he'll make sure he'll take care of me on and off the field," Jackson said.

Jackson said Stepp is an aggressive recruiter who relates well with him.

"I don't know if he does this with every recruit, but I just know how he recruits me. He recruits me very hard," Jackson said. "He's always there. He's someone I can talk to. It's like having a friend, but he's a coach. We have laughs. I just like him as a coach."

He hopes Arkansas feels like a second home during his visit.

"A great environment, atmosphere," he said. "Make it where you feel at home."

Jackson recorded 61 receptions for 889 yards and 6 touchdowns while rushing 6 times for 85 yards as a junior. He was named first team all-District 8-5A D-II at receiver.

CBS Sports Network national recruiting analyst Tom Lemming visited the Dallas-Fort Worth metroplex in December and saw the top prospects in the area. He was impressed with Jackson, whom he rates as a four-star-plus prospect.

"Ketron is an outstanding athlete," Lemming said. "He has very good hands and the big-time speed needed to stretch a defense. He runs good routes and knows how to get open."

Jackson, who has a 3.3 grade-point average, may make some official visits this summer. Next weekend's trip to Fayetteville could help the Hogs secure one of his visits.

"Hopefully they'll make a great impression on me so I can take one," Jackson said.