By: David Campbell Special to the Democrat-Gazette
Published: Sunday, March 1, 2020 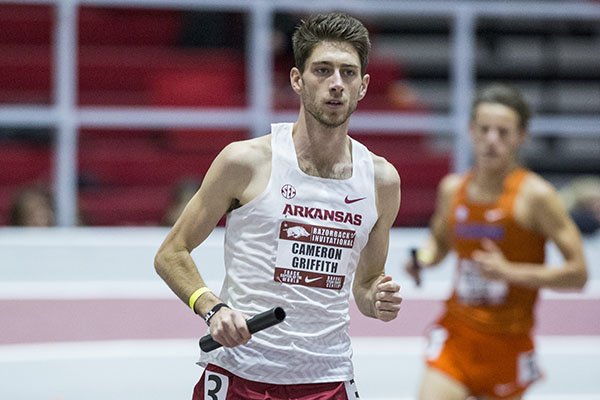 Arkansas' Cameron Griffith is shown during the Razorback Invitational on Friday, Jan. 31, 2020, in Fayetteville.

COLLEGE STATION, Texas -- This time, Cameron Griffith didn't need to look around to see whether he was ahead.

And neither did the University of Arkansas men.

Edged out for a title in the mile, Griffith was comfortably in front at the conclusion of the 3,000 meters, winning the race for a third consecutive year at the SEC Indoor Track and Field Championships on Saturday. Arkansas' superb showing in the race gave the Razorbacks all the cushion they needed to win their first indoor men's team championship since 2017.

"This is not a play-around conference, and to win it is huge," Arkansas men's Coach Chris Bucknam said. "It hardens our shell for the national championship."

Arkansas scored 106 points, and LSU took second with 88. It marked the Razorbacks' 23rd indoor title in the 29 years they have competed in the SEC. In the other six years, they finished second.

The victory at Texas A&M's Gilliam Indoor Track Stadium ended a two-year string without a team win, the Razorbacks' longest stretch without clutching a trophy.

"It seemed like a whole decade," Bucknam said. "Our fans, our program, our alums all expect championships, and they expect us to do it the right way. We got back on the top rung."

Griffith, who scored a meet-high 20 points, led the charge.

"I definitely ran though the line in the 3K more than I did in the mile," said Griffith, who won with a time of 8:10.24. "We put the meet away with that race, and I'm just proud of everyone and how they did."

LSU had taken the team lead in the 200, won by the Tigers' Terrence Laird. Laird, who jumped the gun in the 60, won the opening section in 20.52, which held up despite Georgia freshman Matthew Boling (20.71) running in the second heat.

Dylan Peebles was third and Akanni Hislop took fourth for LSU, propelling the Tigers ahead of the Razorbacks 82-79 with two events remaining. Arkansas had no one in that race.

They had four good ones in the 3,000 and scored 19 points, making the 1,600 relay moot in counting points for the team championship.

An early strategic race in the mile morphed into an all-out sprint over the final 200 meters, with Griffith dueling with Jack Guyton, a senior from Florida.

Griffith took the lead coming off the final turn, but Missouri's Martin Prodanov scooted past Griffith's right shoulder to take the win in 4:14.92.

"I'm not going to lie; I didn't know at all," Griffith said of Prodanov's late challenge. "It wouldn't have made a difference even if I did know he was there. I was pretty much done by 10 meters out. That's when I realized he was there."

"I wanted to win so bad," Griffith said. "This is my last SEC championships ever, because I don't have outdoor, but I'm happy to get second in such a stacked field."

The 3,000 wasn't even the Razorbacks' best group performance. They added 20 to the total in the two-day heptathlon, which concluded Saturday.

Georgia clinched its eight consecutive SEC indoor heptathlon victory when freshman Kyle Gardner (5,856 points) outscored Arkansas' Markus Ballengee, who had 5,706. Gardner moved ahead of Ballengee with 200 meters left in the 1,000 to nail down his win.

Razorback Tyler Brendel climbed into third and Daniel Spejcher took fitth in the heptathlon, giving Arkansas the team lead at that point. Brendel ran 2:37.22, the top time in the 1,000.

In his bid to catch up, Ballengee won the 60 hurdles and tied for second in the pole vault in the early Saturday competition, cutting his needed points to win in half.

"I thought maybe I could catch him in the pole vault, but Gardner PR'd by two bars," Ballengee said. "When I was jumping at (16-6¾), I was like a foot over it, but didn't have my standards set right and came right down on it. Overall, I'm still happy, because that's definitely into nationals and I think Tyler is right on the line to qualify as well."

By running 8.10 in the hurdles, Ballengee began closing the margin in the overall race over first-day leader Kyle Garland from Georgia. Garland was third at 8.16.

Ballengee cleared 16-2¾ in the pole vault, a mark matched by his teammate Brendel. Garland was eighth, clearing 15-3 on his vault to carry a 112-point advantage into the final event.

Etamar Bhastekar finished seventh in the heptathlon for the Razorbacks.

"A combined 20 [team] points, and you couldn't ask for anything better than that, really," Ballengee said.