Women get math to work

By: RICHARD CROOME Special to the Democrat-Gazette
Published: Sunday, March 1, 2020 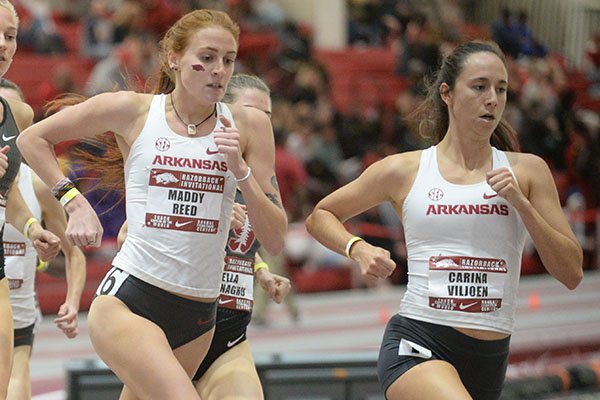 Arkansas' Carina Viljoen (from right) and Maddy Reed lead the field Saturday, Feb. 1, 2020, in the mile run during the Razorback Invitational in the Randal Tyson Track Center in Fayetteville.

"I had forecast it would be 93 to 93," Harter said of the chase with LSU. "I have a cheat sheet, and they had some hemorrhaging here and there, but it all came out roughly in that ballpark."

The Arkansas women won their sixth consecutive indoor championship Saturday with 102 points. LSU finished second with 87.5, and Georgia was third with 78 at the Gilliam Indoor Track Facility on the campus of Texas A&M.

"I talked to Dennis [LSU Coach Shaver] after the meet [Friday] and said, 'Hey, you advanced everybody you had in the meet,' and he said, 'Yeah, we had a perfect situation,' " Harter said. "We thought we had even more than what we thought we would expectation wise, so we knew it was going to be a clash today."

LSU had three runners in two of the four sprints and two in the others, but none of them could match what Arkansas' trio in the mile of Carina Viljoen, Krissy Gear and Maddy Reed did in the first running event of the day.

Viljoen, a senior from South Africa, led from the outset in winning her first individual SEC title with a 4:40.19.

"We were made very aware that the distance events for sure are our strength because last year we lost so many really good sprinters and vaulters," Viljoen said. "We knew it was very important for the distance runners to score, and we also knew that someone like LSU has all the strength when it comes to the sprinters and the faster stuff, so it was important for us to get as many points on the board early, to have a cushion, before it even seemed like a competition."

Viljoen was especially happy with the victory after having to qualify through her time, rather than finishing in the top three in her heat the day before.

"In the prelims, we try to conserve energy ... so the plan was to go out easy, but that is not my strength in competition so I made a couple of tactical errors and almost didn't qualify and that would have been really sad," Viljoen said. "After that, the shock of almost not making it to an event I'm trying to win helped me refocus my mind and get on the right track for today."

Gear came from fourth in the final lap to place second at 4:42.15, and Reed claimed fourth after running in second for much of the race to give Arkansas 23 points in the 1,000.

After LSU, which did not score a single point the first day, held an 81.5-80 lead with two events remaining, the Razorbacks closed the door in the 3,000 with a first, fifth and sixth for 17 points.

"We kind of knew we had [the 3,000] in the sack. Katie is an unbelievable warrior, and she is not going to be denied," Harter said. "[The athletes] put more expectations on themselves than any of the coaching staff could do, so it's just a matter of that Razorback pride they have that they are not going to let anybody down."

Sophomore Bailee McCorkle finished third in the pole vault, clearing a personal-best 14-7½, the same height as the winner from LSU. Freshman Daszay Freeman was fourth in the 60 hurdles at 8.15, and Shafiqua Maloney and Kennedy Thomson were sixth and seventh in the 800. Maloney posted a personal best 2:08.19, and Thomson came home in 2:10.97.

"We had some breakthroughs -- our half-milers, our hurdler -- those are areas we didn't forecast to get points, but they did a good job and then our natural strengths did a fantastic job of keeping the tradition going in the mile and 3K," Harter said. "Then our pole vaulters, a whole new set of vaulters for Bryan [Compton] did unbelievable."

The Razorbacks won the title the previous season by more than doubling second-place Texas A&M. This time around, there was much more scoreboard watching.

"Off the charts more difficult," Harter said. "You cherish them all. This is one of those you don't sleep as well so I'm looking forward to tonight."

The Razorbacks capped the team title with a fourth-place finish in the 1,600 relay, running a 3:32.24 and beating LSU to widen the final gap and win the second leg of the triple they accomplished last season. The Razorbacks have won the cross country and indoor titles. The outdoor title is back at Texas A&M in May.