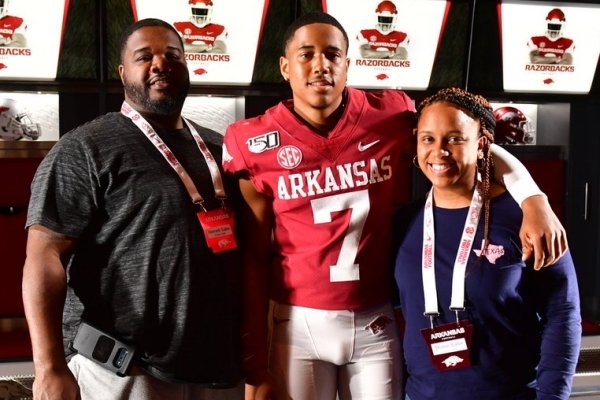 “I loved the visit. I got to see the whole campus, the indoor, the dorms where I would stay if I went here,” Salter said. “It was beautiful.”

Salter, 6-2, 185 pounds, of Cedar Hill, Texas, has offers from Arkansas, Auburn, UCLA, Tennessee, Georgia Tech, South Carolina, Baylor and others. He said the Razorbacks fan base let him know what he was about to see on his visit.

“Arkansas was surprising, but at the same time, the fan base let me know everything on Twitter,” Saleter said. “The fan base is pretty straight forward. It was everything I expected.”

He and offensive coordinator Kendal Briles, a Broyles Award finalist in 2015, go back a few years.

“I’ve known Coach Briles since I was a freshman when I went to camp at Houston,” Salter said. “He told me he would find me again and he did. Our relationship is great.”

Salter is excited about Briles’ offense.

“Coach Pittman had great energy. I loved him,” Salter said. “He told me I fit in the offense great. As I could see, I also fit. We watched some highlights and film from the quarterback history and I could see myself in this offense.”

“He’s 4-star quarterback that has good arm strength and is a terrific ball handler with excellent running skills,” Lemming said. “He’s team leader who can beat you with his arm or legs.”

He’s an admirer of the SEC.

“Most likely the SEC will probably be the best thing for me. Most of my offers that I’m interested in are SEC schools,” Salter said. “One of them might be the pick.”

He visited Ole Miss on Sunday before making his way to Fayetteville. He’s still trying to figure out when he’ll make his college decision.

“I’m not going to rush it, but most likely I’ll hopefully be committed by my senior season or mid-season,” he said. “Arkansas will most definitely get an official visit. I’ll look into Ole Miss more. I don’t know.”

He explained why the Razorbacks will get an official visit.

"The people. They treat me like I’m already here,” Salter said.

He’s expected to visit UCLA on March 10 and Baylor on March 29. The amount of schools recruiting him that could offer him later is numerous.

“Louisville … shoot, everybody. Alabama, Clemson, Ohio State,” he said. “My recruitment has been a bit surprising, but I started expecting it after my big junior season.”