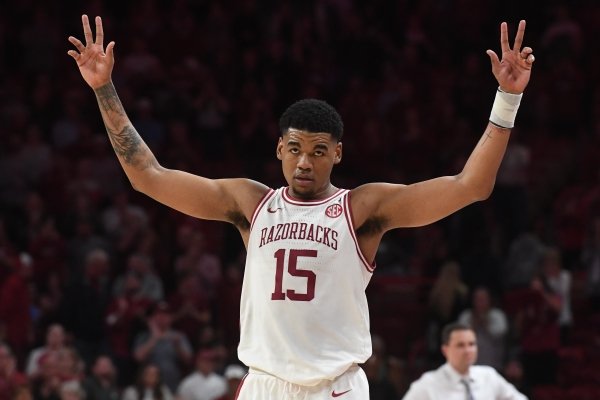 Arkansas' Mason Jones is shown during a game against LSU on Wednesday, March 4, 2020, in Fayetteville.

FAYETTEVILLE — Adam Donyes' first impression of Mason Jones was that he didn't look like a basketball player.

In all honesty, Donyes, head basketball coach at Link Year Prep, thought Jones had spent too much time eating Twinkies prior to arriving on the campus, which sits on the bluffs overlooking Lake Taneycomo in Branson, Mo.

He was out of shape, and 15-20 pounds overweight, that one visiting college coach even nicknamed him "Pork Chop."

Jones, named The Associated Press Co-SEC Player of the Year on Tuesday, was also fighting through some knucklehead tendencies at the time. Rather than using his own two feet to maneuver from class to class and various spots on campus, Jones got around on a hoverboard.

"I would tell him, 'You need to walk to class. Like, you need to walk up these hills. You don’t need that,'" Donyes told WholeHogSports earlier this week. "He was like, ‘Nah, nah, Coach. I got it.’ I told him to get rid of that thing.

"I made him give it to another player that was skinny who needed to gain weight. So Mason started walking everywhere." 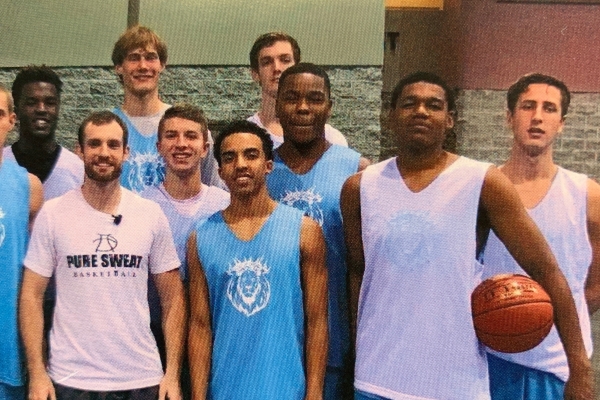 Jones' insecurities fairly regularly led to loud and obnoxious outbursts in his early stages at the prep school. Donyes admits in the first six weeks the two spent with each other that Jones was difficult to be around. His work ethic was gradually improving, but he loved to draw attention on himself.

One day, in the weight room, Jones' dramatics nearly cost him a finger on his left hand.

"He was screaming and yelling, and he goes to throw a weight down like he was really tough and he throws it down on his own finger and almost cuts his whole finger off," said Donyes, who attends Arkansas basketball games to support Jones every chance he gets. "We had to go to the ER. He was showing out, like, trying to impress all the dudes.

"I’m like, ‘You knucklehead, now I’m going to the hospital trying to put the end of your finger back together.’"

Donyes and his staff worked tirelessly with Jones on living in the shadow of his brother and sister, Matt and Jordan. Matt, in 2015, won a national championship at Duke. Jordan was twice selected SEC Defensive Player of the Year at Texas A&M and named an AP All-American in 2014-15.

Rather than trying to meet those expectations, Mason Jones went the opposite direction early on. Donyes says Link Year Prep is not just about player development, but the holistic side, too. And when Donyes pushed him toward his faith again, Jones latched on and never let go. His entire outlook on life changed.

Jones became committed to getting his body right, and he attacked early morning workouts that focused on core, cardio, lower body and upper body. Part of Donyes' plan included what he calls Fountain Runs through the Ozark Mountains.

"He bought in to working hard, changing his eating habits and work habits," said Donyes, who added several high-major coaches told him Jones would never be good enough. "He got here and we got 15 pounds off of him. By the time he left, his body looked completely different."

The coach's proudest moment, however, came in the spring of 2017 when he personally baptized Jones on the school's grounds. A poster-sized photo of the baptism is visible upon entering Donyes' office. It has hung on the wall since Jones left Link Year Prep.

"He is a phenomenal kid - full of life, full of energy," Donyes said. "He is really sweet to people. He treats people the right way because his parents raised him the right way. Once he got past the insecurity stuff and grew in that, I loved being around him." 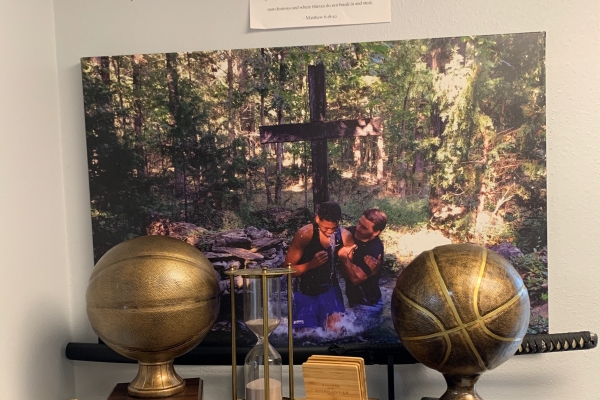 Despite Jones flipping the switch, according to Donyes, and a performance in which the guard hit 7 of 7 3-pointers in a five-minute stretch to close a first half against a junior college team that will no longer schedule Donyes' team, he did not receive any takers at the Division-I level out of prep school.

Instead, he landed at Connors State College in Oklahoma and at the doorstep of Connors coach Bill Muse, who has led the junior college program since 1992 after a brief stint as an assistant coach at Clemson. His first impression of Jones was similar to Donyes', but Muse knew one thing for certain: Jones had good DNA.

He still had some maturity issues to get straightened out after arriving in Warner, Okla., a town with a population of less than 2,000 in Muskogee County. He liked to have fun, but not always at the right time. He had a bit of a silly streak.

"I think I helped him grow out of that and emphasize where he wanted to go with his game and where he wanted to go with his life," said Muse, a nine-time Region II Coach of Year who has won more than 600 games at Connors State. "We had some serious conversations, and I think he really appreciates the year he spent here and the progressions he made as an individual and his game made, too."

It wasn't all smooth sailing for Jones once in Oklahoma. He was still above desired weight, around 220 pounds, Muse estimated. Jones did not start the first few games of his freshman season, but he continued to push. Eventually, he cracked the starting lineup and made an impact.

He became a better shooter with each game, Muse added, and went on to earn Most Valuable Player of Connors State's regional tournament. When he finally got a taste of success, he wanted more and more.

"He liked the transformation his body was making for many reasons, not just for basketball, but for health and physical reasons. I think that perpetuated him to work harder and harder."

In Muse's opinion, Jones deserves a shot in the NBA. He has earned it, he said, adding Jones' array of 1-on-1 moves would translate well to today's pro game. He expects talent evaluators to find something negative about the guard, but Jones has already proven countless people wrong.

Why couldn't he do it again?

"I don’t know how people could not (say he has a shot at the NBA)," Muse said. "He can score the basketball. To me, the name of the game is to be able to score. It’s an offensive league, and he’s an offensive machine. I think he can definitely help somebody and last a long time.

"He worked his ass off. I’m not sure he wanted to be a basketball player in high school. I think he just wanted to, you know, be a student. But something turned him on real quickly. Once he decided, he’s been unbelievable." 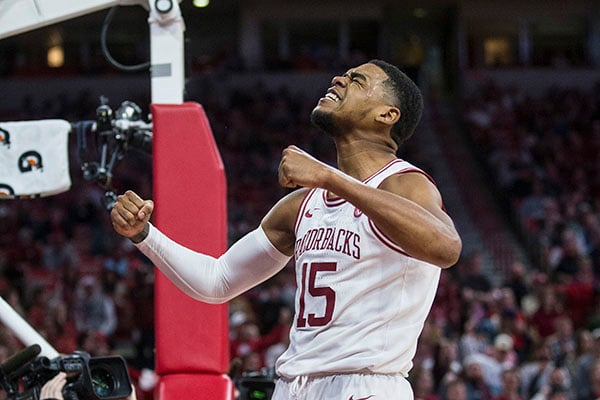 Arkansas guard Mason Jones celebrates after scoring a basket during a game against Tulsa on Saturday, Dec. 14, 2019, in Fayetteville. He finished with a career-high 41 points. (Ben Goff)

Muse views Jones as a unique story, but only to a degree. He had great support at home with terrific parents, a good education and role models ahead of him with his brother and sister - things not every player has.

The uniqueness of Jones' story, through Muse's eyes, is his determination and dedication to shed weight and get his body in shape. His transformation has literally been the talk of the SEC season, discussed on every TV broadcast of the Razorbacks' games.

"I'm like a proud father," Muse said. "I love to see all my kids be successful. Mason has just been an unbelievable success story. I know he was talented, but, I mean, did I believe he’d lead the SEC in scoring his second year? Not really.

"I knew he had potential, but I didn’t know he’d jump like this."

Donyes and Muse both credited former Arkansas coach Mike Anderson and his assistants for finding and taking a chance on Jones. He was the final junior college player mined by the staff who paid dividends for the Razorbacks.

And he is the latest in a long line of JUCO success stories at Arkansas. Of the Razorbacks’ eight players who have been named conference player of the year, three - Jones, Martin Terry and Ron Brewer - transferred from a junior college.

Other JUCO finds by Anderson's staff included Daryl Macon and Jaylen Barford, who were both all-conference performers, as well as forward Coty Clarke and guard Jabril Durham, a close friend of the Jones family.

Jones, though, exploded onto the scene in his first year working with Eric Musselman, who allowed the guard to be himself without handcuffs.

"Not that Mike (handcuffed Jones), I just think he fits into the system Musselman is playing to a 'T,'" Muse said. "He lets him bring the ball up. He gives him a lot of freedom playing multiple positions, exposing mismatches. That's what I think has helped his game.

"This year has been unbelievable."