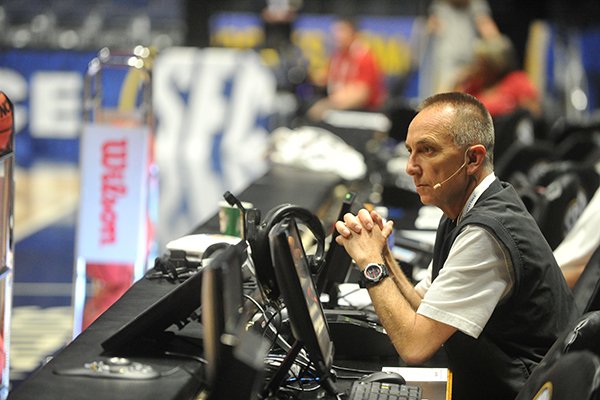 John George watches warmups prior to an SEC Tournament game on Thursday, March 9, 2016, at Bridgestone Arena in Nashville, Tenn.

FAYETTEVILLE -- John George, public address announcer for University of Arkansas basketball games for 42 seasons who has handled the same duties at the SEC Tournament for 14 years, figured nothing could come close to matching what he experienced in 2008.

A tornado tore through downtown Atlanta the night of March 14 as the last quarterfinal game was being played in the SEC Tournament and damaged the Georgia Dome roof.

The decision was made to move the 2008 SEC Tournament semifinals and championship game to Georgia Tech's Alexander Coliseum, where Georgia beat Arkansas to win the title.

"It was just such a surreal situation," said George, whose announcements in the immediate aftermath of the tornado helped calm fans in the Georgia Dome. "You go through something like that and figure, 'Well, nothing that strange is ever going to happen again. What could possibly top that?' "

After two first-round games were played last Wednesday night, SEC Commissioner Greg Sankey announced on Thursday -- shortly before Alabama and Tennessee were to play the second-round opener -- that the rest of the tournament had been canceled because of health concerns related to containing the spread of the coronavirus.

"We were getting ready for the first game on Thursday, then some guys from the SEC office said, 'Everybody's going home, we're done,' " George said. "It wasn't the same thing as a tornado hitting the building, but you're still stunned.

"We didn't know the cancellation was coming, either. You just sit back in your chair for a moment and think, 'Is this really happening?'"

George, who lives in Springdale and is a real estate developer, was ready to work all 13 games in five days -- just as he had every year since 2013 when two games were added to the SEC Tournament with Missouri and Texas A&M joining the conference to make it 14 teams.

Since becoming the SEC Tournament's public address announcer in 2007, George has missed only two games. His first year the SEC had another announcer call the second two games on the opening night after George worked the first two.

George was eating dinner at his hotel when he got a call from an SEC official. It turned out the other guy was making announcements during free throws and when officials were trying to communicate with the scorer's table.

To start this year's SEC Tournament George was the announcer for Georgia's 81-63 victory over Ole Miss and Arkansas' 86-73 victory over Vanderbilt. Thursday's four second-round games were scheduled to be capped by Arkansas playing South Carolina.

"I was excited because the Razorbacks had won their first game and I was looking forward to seeing them play the next night," George said. "I was excited about all the games."

One thing George wasn't excited about doing was announcing Wednesday night at halftime of the Arkansas-Vanderbilt game that the remainder of the SEC Tournament games would be closed to fans, except for family members of the teams playing each other.

George had barely gotten the words out of his mouth when fans began booing loudly. He then had to repeat the announcement to more boos.

"I knew what was going to happen, and I knew the fans weren't booing me personally," George said. "They were booing the announcement itself, which understandably was very upsetting to everyone."

George, 63, said it was the third time fans have booed during one his announcements with the other two times happening at Arkansas home games.

Sometime during the 1970s -- George couldn't remember the exact year -- he was asked to announce that Gov. Bill Clinton was in attendance at a game in Barnhill Arena.

When George introduced Clinton, the future president of the United States was booed.

"This was after Clinton had raised taxes on car tags from $18 to $40 or something like that and everyone was upset about it," George said.

The second time a George announcement was booed happened on Jan. 8, 2002.

Michael Collyar of Fort Smith took part in a promotion at halftime of the Razorbacks' 75-64 victory over No. 22 Mississippi State in Walton Arena and hit a half-court shot to win $10,000.

But the shot was waved off by Matt Shanklin, Arkansas' assistant athletic director for marketing, because one of Collyar's feet went over the line. The athletic department carried insurance to cover a potential large promotional payoff, but the company would not have paid in this instance, Shanklin said.

When George made the announcement the shot wouldn't count, fans booed as if Kentucky had just taken the floor for pregame warmups.

Among those booing was Arkansas Athletic Director Frank Broyles.

When George made the announcement, the boos quickly turned to cheers.

"That was the right thing to do for him," White said at the time. "Bless his heart, he thought he had it. He just graduated. This will help him pay some bills. It's a good way to start the new year."

Collyar, who had graduated in December with a degree in computer engineering, was relieved the shot counted.

George was preparing for Thursday's SEC Tournament games knowing he would be working in front of a crowd of 250 -- each team was allowed 125 spectators -- but he said he was ready to do his best for the players and their families and close friends allowed to attend.

Bands and cheerleaders were not allowed, but George said there was going to be disc jockey to provide music during timeouts.

"It was going to be a subdued atmosphere," George said. "But everybody on the scorer's table was ready to give it our best just like there was a big crowd there."

George was used to games with smaller crowds -- around 1,000 -- when the 2008 SEC Tournament games had to be moved from the Georgia Dome.

SEC officials decided not to allow a capacity of 9,000-plus fans into Alexander Coliseum because there were a limited number of security personnel available with Atlanta police officers focused on working in the city after the tornado and also because it was tough to decide who among more than 20,000 ticket holders should be allowed at the games. So each team was allowed about 500 fans.

In the last game of the 2008 SEC Tournament played at the Georgia Dome -- when Mississippi State beat Alabama 69-67 in overtime -- the announced crowd was 20,125.

Mississippi State led 64-61 with 2:11 left in overtime when a tornado struck the area and tore part of the Georgia Dome roof.

"Whenever I first started hearing noise, I was thinking an airplane was coming really close to the arena," George said. "My first thought was, 'Someone's going to slam an airplane into the arena.'

"The players stopped all of a sudden, and they all started looking around and then looking up. I saw pieces of metal --some nut and bolts -- fall onto the floor.

"Then I looked up and the whole scoreboard is swaying. I'm thinking, 'That scoreboard probably weighs about 2 tons. It shouldn't be swaying.' I saw girders swaying back and forth on the roof. I'm thinking, 'How long is the roof going to stay up?'

"This all happened probably within 20 or 30 seconds. It seemed like a lifetime. But it was enough time where both teams and the referees were ushered to the sidelines, and then the teams went to their locker rooms."

George said security officials from the SEC and the Georgia Dome huddled behind him at the scorer's table.

"Everybody was talking about what to do," George said. "Something like that had never happened before and no one was quite sure how to proceed."

George remembered he had a playbook that Arkansas had compiled on what to do in an emergency situation at a game. He always carried it with him.

"I thumbed through it really quickly and showed it to the SEC and Georgia Dome officials, and they said, 'That sounds good, let's go with that,' as far as keeping the fans from panicking and some people perhaps getting hurt," George said. "One of the guys said we've got some prerecorded announcements we could play.

"I said, 'We don't need prerecorded announcements because the fans will think that people in charge have headed out. The best thing to do is for us to be visible down here on the court and keep making announcements to keep people calm,' and that's what we did.

"We made an announcement pretty quickly about how there's been some weather occurrences outside and we want you to stay inside, where you're safer. Even if we were making essentially the same announcement every few seconds, we just changed the wording around a little bit so people would know it wasn't a recording."

The roof held up and after about an hour, Mississippi State and Alabama finished their game with the Bulldogs winning. Fans were then allowed to leave the Georgia Dome as the weather had cleared and was no longer a threat.

"I felt like the SEC officials got a handle on it very quickly and helped to subdue any panic," George said. "I think they would have figured out the best thing to do, but having my Arkansas playbook helped.

"You realize what kind of responsibility you have behind that microphone. The things you say and the way you say them could influence what people do that could be good or bad for them regarding the decisions they make at that moment."

George said he wasn't scared when the tornado hit.

"You didn't really have time to be scared," he said. "But I did look to see how are it was for me to sprint to a tunnel leading from the court if those girders had started to come down."

There was no imminent danger when the remainder of the SEC Tournament was canceled last week, but George said he understood the health concerns that led to the decision.

"I didn't think there was anything that would top the tornado," he said. "But I don't think anyone could foresee a world-wide pandemic.

"You feel bad for everyone that the tournament had to be canceled, and especially for all the players who worked so hard to get there and then didn't get to finish it out.

"But you don't want to compromise people's health. So let's just take a deep breath and take care of each other and be as safe as possible."

George said he's looking forward to working at the SEC Tournament in 2021 when it is scheduled to return to Nashville.

"I don't know what else can happen at the SEC Tournament," he said. "But hopefully everything will be back to normal next year."