Van Horn: At least 3 won’t get another UA at-bat 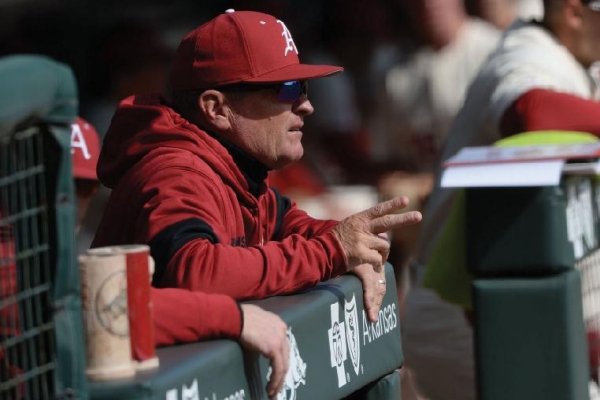 Arkansas coach Dave Van Horn watches from the dugout Thursday, Feb. 20, 2020, during the Hogs' 7-5 win over Gonzaga at Baum-Walker Stadium.

FAYETTEVILLE -- Coach Dave Van Horn gave voice Wednesday to what University of Arkansas baseball fans knew would be an inevitable result of the canceled college baseball season because of concerns about the coronavirus.

"I don't expect probably three of our guys, for sure, to come back, and that would be both of the Caseys and Heston Kjerstad," Van Horn said on a UA coaches teleconference Wednesday.

Van Horn was talking about shortstop Casey Martin, catcher Casey Opitz and Kjerstad, who was on track to rewrite record book entries for the No. 14 Razorbacks when the season was abruptly suspended Thursday, then canceled Tuesday.

All three are expected to be high draft choices in the next Major League Baseball amateur draft, which is scheduled to start June 10.

"For me personally, you just didn't get to finish the book," Van Horn said. "I mean, you've got guys that possibly could have been in the record books forever here and a team that had been to Omaha two years in a row and was going to try to get there three ... it's hard to get there one year in a row, and we don't get a chance to accomplish that."

Kjerstad and Opitz were Team USA participants in the summer and off to good starts. Kjerstad was hitting .448, good for 19th in Division I, as was his six home runs. His 20 RBI ranked 35th nationally.

Martin (.271) had an up-and-down start to his junior year, with 2 home runs and 10 RBI. He had three hits, including a go-ahead three-run home run, in the Razorbacks' last game, a 10-9 victory over Grand Canyon on March 11.

"Just seeing guys like Casey Opitz catch, there's probably not a better receiver in the country," Van Horn said. "And then Casey Martin, who has really battled through some things as far as on the field, and I think he was really starting to come out of it.

"I think we were getting ready to see the best of him, and I really liked the way he handled all the pressure and his demeanor even when he wasn't having a good day compared to maybe last year when it didn't go good for him, just the growth mentally for him and the development to be able to handle the tough days. I think he was getting ready to take off."

The Razorbacks were getting ready to head to the airport to fly to their first SEC series at Mississippi State last Thursday when Van Horn started getting text messages and phone calls to hold up.

"I guess my first reaction was, 'How are the players going to feel?' These guys work hard," Van Horn said. "I think we were just starting to jell a little bit. We really started getting some of our younger players involved on the mound and won a few games in a row after losing a couple of tight games. It just seemed like things were going good. It was just a good feel."

Van Horn and his coaching staff had a sinking feeling that the temporary suspensions imposed by the SEC -- halting games through March 30, then moving that date to April 15 before canceling the season for good Tuesday -- would lead to an ending of the season.

"I think behind closed doors we were thinking, 'We're done.' Then we got word of basically postponing everything for a couple of weeks, and then it moved to a couple other weeks and it was basically, 'When are they going to tell us this is over?' " he said. "With our sport, and most sports, you've got to train, you've got to train for a date to get to a certain point with pitchers' arms and number of pitches. Hitters, they have to swing that bat almost every day a lot to keep sharp and continue to get better and see live pitching.

"You're thinking, 'Well, if we did get to start again with practice in the middle of April, how long is it going to take to get everybody ready?' So you kind of knew it was going to go away."

Van Horn said the team meeting Friday, when it was known there would be no team activities until at least April 15, was a tough one. He brought all of his assistant coaches to the front of the room.

"Normally I stand up when I talk to the team. I sat down because it was tough. I just feel bad for the guys that maybe skipped playing pro ball to come here, and some of the guys that were about to set records.

"I mean, Heston Kjerstad, we won't get to see that guy swing the bat in a Razorback uniform again and what a pleasure that was. That kid had six home runs and 20 RBIs already. I think he might have broken the home run record before it was over with. He was starting to heat up, the weather was starting to change. I think he'd hit mid-20s to 30 home runs, I truly do. A little disappointed there, with all these guys. I could go on and on. It was just really hard for me to look at the players and their reaction. I think they were just in shock."

Although all competition is canceled, the Razorbacks and other SEC teams might be afforded the opportunity to re-assemble before the spring semester ends to resume team activities. That decision has not been made and cannot happen before April 15.

"If we can practice with the kids, just for development's sake with the younger guys, we want to work out and get them ready maybe for summer ball, and the older guys -- or some of the guys that are going to be high draft choices and are going to sign -- we'd like to help them get ready for their next step in baseball," Van Horn said. "We'll do whatever we can do ... if we're cleared to practice and they can come back to campus.

"Now, I don't know what it's going to be in a couple weeks, we'll just have to play that by ear, but we're prepared to do that."

A couple of other draft-eligible Arkansas sophomores in right-handed pitcher Connor Noland and third baseman Jacob Nesbit will have decisions to make about returning for their junior years, depending on where they get drafted.

Van Horn said he was also eager to see players such as sophomore outfielder Christian Franklin, who was hitting .381 with 3 home runs and 11 RBI at the time of the suspension, continue to develop.

Van Horn expressed hope the pandemic will play out soon and that the NCAA and conferences will reach an agreement on how to give a year of competition back to players in the spring sports who want them.

"I know they will get back to normal," he said. "They will get under control. I'm very optimistic. I'm just ready for, like everybody else I would think, to know what is the plan?

As with many other things regarding the coronavirus pandemic and the responses by governing agencies across the world, those are fluid concepts that will need some time to resolve.