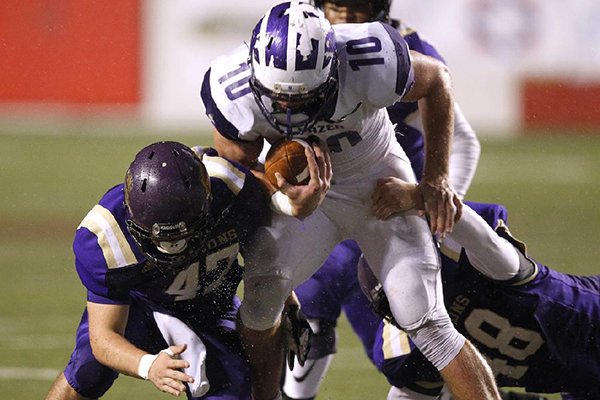 FAYETTEVILLE — When Hazen standout and early enrollee Blayne Toll arrived on the Arkansas campus in January, he was ticketed for defensive end.

But a lack of scholarship tight ends on the roster found Toll (6-5, 244) being asked to move to tight end, something he readily went along with, according to Razorbacks coach Sam Pittman.

“Well, first of all, he’ll do anything for the team,” Pittman said during a lengthy teleconference Friday morning. “He’s such a great kid. Second of all, we feel like we needed another tight end. When he was running in the offseason, the guy can fly.”

“It doesn’t hurt to have somebody who can fly off the defensive edge, too, we know that,” Pittman said. “But the bottom line is we basically said if we get Xavier Kelly that we were going to move Blayne over to tight end and see if he couldn’t help us. If we didn’t, we were going to leave Blayne there, and maybe move a kid like (walk-on quarterback) Cade Pearson (6-3, 223), or somebody like that, to tight end, who is a hard-working kid with a good body on him. He’s got good size.

“So when we got Kelly the next day, we talked to Blayne and he was very positive about the move. He’s done a really good job over there in the walkthroughs. We felt like we needed to move him if we were going to move him so he didn’t get behind the installs and things of that nature. We moved him over there, and he’s a talented guy.

“He looks like a tight end, and he can run, so we feel like we’re really fortunate to have him there and on our team, and at that position of tight end.”

Pittman praised Kern, too, labeling him "a workaholic."