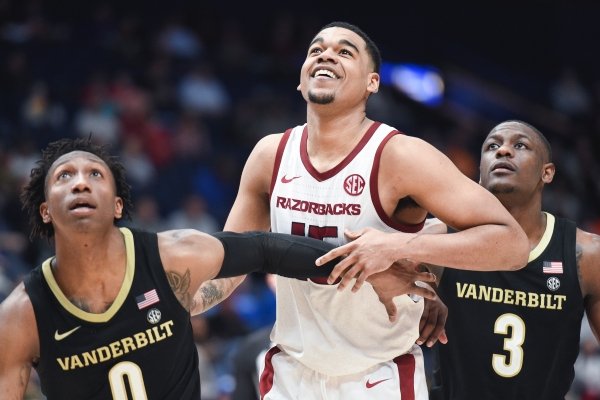 Mason Jones watches as a teammate attempts a free throw on Wednesday, March 11, 2020 during a basketball game at Bridgestone Arena in Nashville, Tenn, against Vanderbilt in the SEC Tournament.

FAYETTEVILLE -- The 65 media members who voted for the top 25 teams all season in The Associated Press poll decided University of Arkansas guard Mason Jones was one of the top 20 players in the nation.

KEEPING UP WITH JONES

Here are some of Mason Jones’ notable accomplishments for the Razorbacks this season:

• First-team All-SEC by media and coaches

• 44th Razorback to score 1,000 career points, and eighth to do it in first two seasons in the program

Points were awarded on a 5-3-1 basis for players voted to the first, second and third teams. Jones finished with 11 points, so he received multiple votes.

Jones is the 31st Razorback to earn All-American recognition, including the 16th from the AP.

Jones averaged 22.0 points to become the first Razorback to lead the SEC in scoring since Arkansas joined the conference for the 1991-92 season.

It's the highest scoring season for a Razorback since Todd Day averaged 22.7 points as a senior in 1991-92. He finished third in the SEC in scoring that season. Ole Miss forward Joe Harvell, from Gosnell, averaged 25.0 points to lead the SEC and LSU center Shaquille O'Neal averaged 24.1 points to finish second.

Jones also averaged 5.5 rebounds, 3.4 assists and 1.6 steals this season to lead Arkansas in all three categories.

According to Hogstats.com, Jones is the second player to lead the Razorbacks in scoring, rebounding, assists and steals along with Sidney Moncrief, a two-time AP All-American, who as a senior averaged 22.0 points, 9.6 rebounds, 2.7 assists and 1.5 steals for the 1978-79 season.

Jones was voted AP co-SEC player of the year along with Mississippi State sophomore forward Reggie Perry and was a first-team All-SEC selection by the media and coaches.

Kentucky sophomore guard Immanuel Quickley, who was the coaches' choice for SEC player of the year, also was an AP honorable mention All-American. He and Jones were the only SEC players to get All-American recognition from the AP.

"You obviously want guys that can shoot the ball from the perimeter, but then you want guys that can draw fouls," Musselman said. "That's so important. Probably the general fan doesn't understand, when you draw free throws attempted, it helps your defense. Because the other team's not playing in the flow of the game and your defense can get set."

Opposing teams struggled to keep the hard-driving Jones in front of them.

"Mason with his ball-handling, he can go left, he can go right, he can shoot the mid-range," Musselman said. "He can get all the way to the rim and finish. He's just a versatile guy.

Musselman said before the SEC Tournament Jones has the creativity in the game to draw a lot fouls.

"That's kind of grown and grown as the season has progressed," Musselman said. "The referees respect his ability to lift defenders and get guys off the ground to draw contact.

"He's had a fabulous season offensively for sure. He's one of the best offensive players in the country."

Jones averaged 13.6 points last season for the Razorbacks after transferring from Connors State College in Warner, Okla. He quickly developed a close relationship with Musselman, who was hired in April after leading Nevada to a 110-34 record the previous four seasons.

"Coach Muss is probably one of the best things that ever happened to me, because this year has been nothing but as I planned and I wanted," Jones said in January. "As I talked to him when he first got here, I told Coach Muss that I want to be more consistent, and I want to be great, and I want you to push me to be a pro.

"Our relationship is incredible. We always talk. I love the guy."

Musselman said the feeling is mutual.

"I love Mason," Musselman said. "I love coaching him. No day is ever the same with Mason Jones, I will say that.

"We have a unique relationship, for sure, in a great way. He's an incredible communicator after games. He wants feedback. He's constantly asking, 'What do you see? What can I do better? Give me a grade on how I'm playing.'

There wasn't much negative feedback for Jones this season.

Jones opened the season by scoring 32 points against Rice. He scored 20 or more points in 18 games -- including a career-high 40 against Tulsa -- and 30 or more in nine games.

"Some experiments fail, and the 'Mason Jones with the ball in his hands' experiment has not failed," Musselman said. "It's been successful. And most of it has to do with all the work he put in in the offseason.

"It's awesome when a guy works hard and then his game elevates, which is what's happened with Mason."

In SEC play, Jones averaged 23.6 points. He scored 40 against Auburn, 38 against Mississippi State, 37 against Tennessee and 36 against LSU.

In the few games in which Jones didn't score well, he usually piled up other stats. When he was held to a combined 14 points in back-to-back games against Ole Miss and Vanderbilt, he had 17 assists, 13 rebounds and 4 steals.

Musselman praised Jones' ability to play multiple positions for the under-sized Razorbacks, who often went with four guards on the court at the same time and sometimes five.

"For the betterment of the team, he played that power forward spot."

Whatever the position, Jones made plays for himself and his teammates.

"He became a point-forward for us," Musselman said. "Moving forward, I think Mason could play stretches of a game as a point guard and give us great size. It's not a lock because he's a scorer, but for a short segment, he has that in him to be a playmaker, whether that's the [power forward] spot or wherever."

Jones could enter the NBA Draft, but not sign with an agent to retain his college eligibility, withdraw and return to Arkansas for his senior season. He could choose to not enter the draft at all and play for the Razorbacks again. Or he could turn pro.

"He's going to keep getting better," Musselman said. "I don't think that stops.

"If he has the same work ethic that he did last summer and he comes back, he's going to have a better year. His percentages will go up and his numbers will go up because he's that type of guy who works."