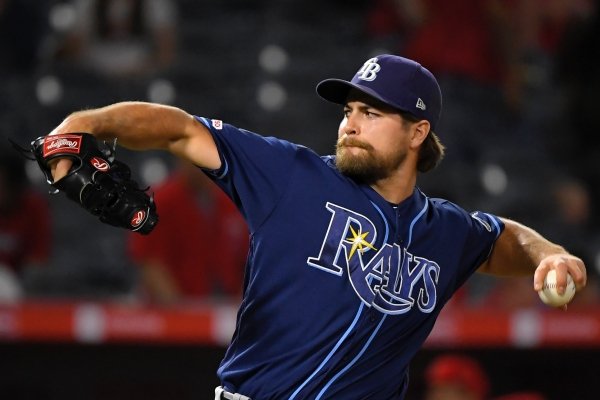 FAYETTEVILLE -- Under normal circumstances, Jalen Beeks would be in Florida preparing for another season as a pitcher for the Tampa Bay Rays.

But these days are far from normal with much of the sports world at a standstill as a preventive measure against the coronavirus outbreak. That includes Major League Baseball, which suspended spring training on March 12 and announced that the start of the regular season would be delayed.

Tampa Bay's schedule still lists March 26 as its season-opener against Pittsburgh, but that game most certainly will be delayed by weeks if played at all.

"It's unprecedented with what's happening," Beeks said by phone while driving to Northwest Arkansas from Florida last week with his wife and children. "I wasn't surprised about spring training being stopped, especially after the NBA canceled its season. It's unfortunate, but I'm behind this decision 100%. It's important to keep everybody safe."

Beeks is among a handful of professional baseball players from Northwest Arkansas whose careers are on hold. The former Prairie Grove and University of Arkansas standout is hoping to solidify his status as a major league pitcher after being traded from the Boston Red Sox to Tampa Bay in 2018. He appeared in 33 games last season, where he went 6-3 4.41 earned run average for the Rays.

While Beeks was traveling to Northwest Arkansas, his former Tampa Bay teammate Hunter Wood had already arrived from spring training in Arizona.

The work stoppage is particularly bad timing for Wood, who was traded from Tampa Bay to the Cleveland Indians in July. Wood, a former Rogers Heritage star, is hoping for more opportunities in Cleveland after he appeared in 17 games last season with the Indians, where he was 0-0 with a 3.86 ERA.

"I showed up to spring training with the flu, and I was just starting to feel better in the last few days," Wood said. "Then, all of a sudden, this happens. There's just so much uncertainty right now."

With schools and universities shut down, professional players are conducting their workouts in an effort to try and stay in reasonable shape for whenever the season resumes. Wood throws occasionally with Ben Pollock, a cousin who plays for Rogers Heritage.

Continuing a steady workout regiment is vital for pitchers, who hope to avoid any arm issues when play resumes. Canceling spring training means teams will reconvene at their own ballparks throughout the country and Canada and hold intrasquad games in preparation for the regular season.

Players on major league rosters do not get paid for spring training games, but the owners and players' union are in discussion for a possible payment plan for players during the work stoppage. While that's being worked out, Major League Baseball announced Thursday minor-league players will receive per diems through April 8.

That's good news for area minor-leaguers like Logan Gragg, Ty Tice, and Jake Reindl, who've returned home while they await the resumption of professional baseball. Gragg, who like Tice and Beeks attended Prairie Grove High School, was at the St. Louis Cardinals' complex in Jupiter, Fla., when spring training was canceled.

"I was there working out in Florida and then, two hours later, I was on a plane headed home," said Gragg, a pitcher who was drafted by the Cardinals from Oklahoma State.

Reindl, who played in high school at Shiloh Christian, was in Arizona at the Chicago Cubs' facility when he got word that spring training was canceled. He was working out with a group of players likely destined for Class A after spending part of his first year at Eugene, Ore., in the Short-A Northwest League.

"I had been making jokes about games being canceled, not taking it too seriously," Reindl said. "So, I was pretty shocked when it actually happened. All we can do now is stay calm and hope for the best."