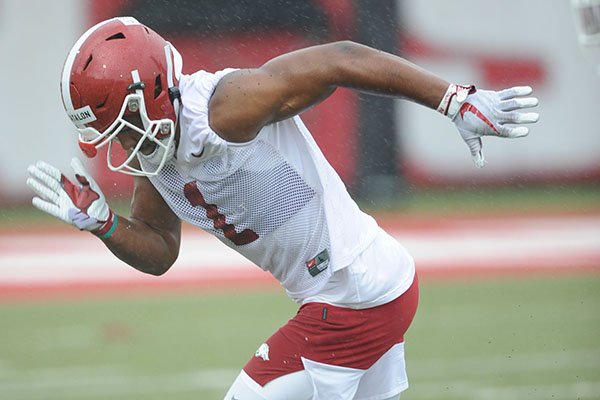 FAYETTEVILLE -- Sam Pittman was asked an open-ended question late last week about which University of Arkansas football players had made "the biggest jumps in workouts" and players who impressed the coaching staff during winter conditioning and weight work.

You'd need an Arkansas two-deep depth chart to track his response because Pittman hit hot spots all over the Razorbacks roster.

The Razorbacks had just completed their winter strength and conditioning program, which Pittman had pushed back as far as possible so the staff could focus on strength and weight gains to improve confidence, when the SEC's response to the spread of coronavirus was to suspend all athletic activities through April 15.

Arkansas, which was going to hold the first of 15 spring practices on March 16, did not get underway and is awaiting further word on the resumption of activities.

Pittman, interestingly, honed in first on the defensive backfield, where a lack of depth has affected the Razorbacks for many years running.

"I can tell you that the secondary, I've been really pleased with that group," Pittman began.

"Jalen Catalon has really had a good offseason, along with Bush and McClellion," Pittman said. "I think that's probably been the most surprising group. I don't know if surprising is the word, but we're pleased with the depth there."

Pittman also singled out early enrollee Myles Slusher, one of the top-rated signees from Arkansas' incoming class, as well as walk-on Simeon Blair, whom Pittman called "a guy that works crazy hard."

Catalon, a safety, was a mystery last season. He was touted by previous Coach Chad Morris as one of the top five prep players he had ever scouted, grouping him with players like DeShaun Watson. The 5-10, 198-pounder from Mansfield, Texas, was a revelation in training camp with a series of interceptions. He had a pair of pick-sixes in one week, one of which turned into a viral video as it featured then-defensive coordinator John Chavis chugging down the sideline after Catalon to be the first to congratulate him in the end zone.

However, Catalon did not make it into the thin rotation at safety behind starters Kamren Curl and Joe Foucha. He appeared at the very end of games against Ole Miss, San Jose State and Kentucky, according to the participation charts, then racked up all his stats against Western Kentucky. He is listed as having played in four games, collecting six tackles, a pass breakup and a forced fumble.

Bush is listed as appearing in consecutive games against Ole Miss, Colorado State, San Jose State and Texas A&M and did not record a statistic in minimal playing time. He originally entered the transfer portal but withdrew his name soon after Pittman was named head coach on Dec. 8.

The previous Arkansas coaching staff did well to retain the redshirts of players like Bush and Catalon, but they fell far short of maximizing the four-game rule to see if they could have contributed more than they did.

McClellion made 11 starts and fellow cornerback Montaric Brown started 10 games to give the Razorbacks four returning starters in the secondary, along with the junior Foucha (12 starts) and sophomore nickel back Greg Brooks Jr. (12).

Pittman next turned his praise toward the offensive line, his area of expertise.

"They all work hard, but Shane Clenin and Ricky Stromberg have really done some things," Pittman said, pointing out that Stromberg has hit the 300-pound mark and starting left tackle Myron Cunningham is nearing it.

"Those guys are gaining a lot of strength," Pittman added.

Three key contributors -- starting center Ty Clary, starting tackle Dalton Wagner and tackle Noah Gatlin -- were all limited during winter workouts following surgeries. Gatlin had knee surgery after suffering his injury on the first day of fall camp, while Clary and Wagner had off-season surgeries on their shoulders.

Pittman said he liked what he's seen in the inury recoveries of quarterbacks Feleipe Franks and KJ Jefferson, while adding that Jack Lindsey and John Stephen Jones have "worked their butts off."

"Feliepe Franks, certainly that ankle has healed," Pittman said. "I don't know if he's 100 percent yet, but he may be 90 or 95. He's looking really good. KJ Jefferson is the same way."

Later, Pittman pointed out Franks as a team leader on offense, particularly in helping Jefferson.

At the receiver group Pittman said a number of players stick out from the off-season program, but he gave praise to junior Mike Woods' leadership and to sophomore Treylon Burks' physical traits.

"Treylon Burks, for being a big kid, can really run," Pittman said. "He has some good hips I'll tell you."

The tight end group, shortened with the losses of Cheyenne O'Grady and Chase Harrell and the transfer of Grayson Gunter, has picked up help with signee Blayne Toll joining redshirt freshman Hudson Henry and walk-on senior Blake Kern.

"Blake Kern at tight end, he's a workaholic now," Pittman said. "That group with him and Henry, and we've moved Blayne Toll over there, those guys have performed really well."

At the linebacker spots, Pittman said "You know they're a little beat up with [Hayden] Henry and [Bumper] Pool being out [after surgeries], but Grant Morgan and Deon Edwards, they've probably put on 10 or 12 pounds apiece and they're moving really well.

"I'd be remiss if I didn't mention Zach Zimos. He's had some weight gains. Probably 10 or 12 pounds heavier than he was. We're looking forward to working with him. We think he can do some things because he can really run. ... Andrew Parker, I think he's had a really good offseason as well."

The defensive line group, which lost starters McTelvin Agim, T.J. Smith and Gabe Richardson, has some rebuilding to do.

"The D-line group, the guys that are standing out there No. 1 is probably Jonathan Marshall," Pittman said. "Dorian Gerald has had a good offseason."

Gerald missed the final 11 games while recovering from a strained artery in his neck, which happened in the second quarter of the season opener against Portland State.

Pittman also singled out sophomore Mataio Soli, who played with a huge wrap on a broken hand most of the season.

Pittman said Marshall has displayed good leadership skills and early enrollee Julius Coates has made an impression as well.

"Coates has probably been the one who has stuck out the most athletically," he said. "He's a big, athletic guy who can run."

Pittman and his staff were encouraged by the strength and conditioning gains made by the Razorbacks in January and February. Now the key question is, can those players still be in good shape when football resumes?