Hogs get to look ahead to next season 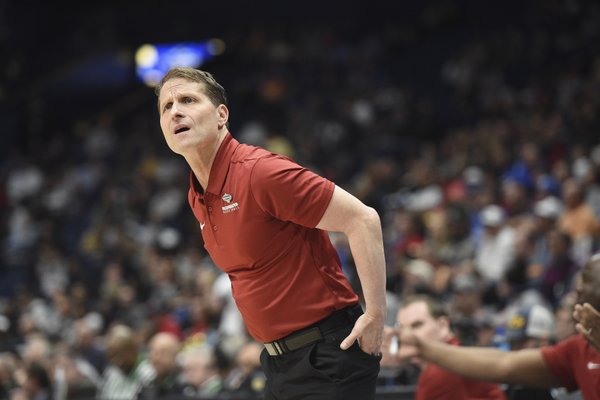 It's a long time until Arkansas opens its 2020-21 basketball season, but I don't blame anyone for looking ahead. Count me among them.

A depth-challenged Razorback team that still finished 20-12 this past season should have have plenty of returnees and reinforcements on hand for a season which will include some early excitement. Arkansas is a part of the 7th annual MGM Resorts Main Event in Las Vegas on Nov. 20-22.

Arkansas has a chance for a special season if both co-SEC Player of the Year and Honorable Mention All-American Mason Jones and Isaiah Joe return. The Razorbacks could add seven or eight newcomers.

Jones and Joe returning is something I expect at this point although both will most likely take advantage of the NBA Undergraduate Advisory Committee. The UAC was established in 1997 in consultation with the NCAA and provides college underclassmen who are thinking of turning professional with an independent evaluation of their prospects in the upcoming NBA Draft.

The UAC is taking applications until April 16. Each UAC applicant will receive a written evaluation that provides his most likely draft range or indicates that he is likely not to be draft.

The UAC committee gets input from the 30 NBA teams to help the players make the wisest decision. Players get the report in 10 days or less.

They will get that evaluation before April 26, the date underclassman must apply for the June 25th NBA Draft although all of those dates could get pushed back due to concerns with the coronavirus pandemic.

Arkansas head coach Eric Musselman was hesitant to look ahead during his teleconference last week, but you just know he has been thinking about the possibility of having both back.

"To speculate on where our team is, we certainly feel like that Mason and Isaiah are two of the premier players in college basketball," Musselman said. "...I think if they decided to come back, I think they'd both be two of the best players in the country and I think their role would be incredible on our team. If it's a difficult decision, then we're here to do whatever we can to help them."

The Razorbacks, whose recruiting class is ranked seventh nationally by ESPN, also have a scholarship available to land a graduate or regular transfer since junior point guard Jalen Harris announced his intention to transfer on Tuesday.

ESPN's Jeff Borzello has the Razorbacks at No. 20 while CBS' Gary Parrish has them at No. 23.

"Musselman has done the rapid-rebuild thing before at Nevada and he's on his way at Arkansas," writes ESPN's Jeff Borzello.

Parrish believes the Razorbacks may even have a chance for the program's first appearance on the second weekend of the NCAA Tournament for the first time in 25 years.

"Arkansas' 20-12 record this season is a bit misleading because the Razorbacks were actually 19-7 with Isaiah Joe in the lineup, just 1-5 without him," Parrish write. "With Joe expected back, Arkansas should return three of its top four scorers and enroll a top-10 recruiting class featuring four top-100 prospects - most notably Moses Moody. So Eric Musselman should have the Hogs in the NCAA Tournament and positioned to maybe make the Sweet 16 for the first time since 1996."