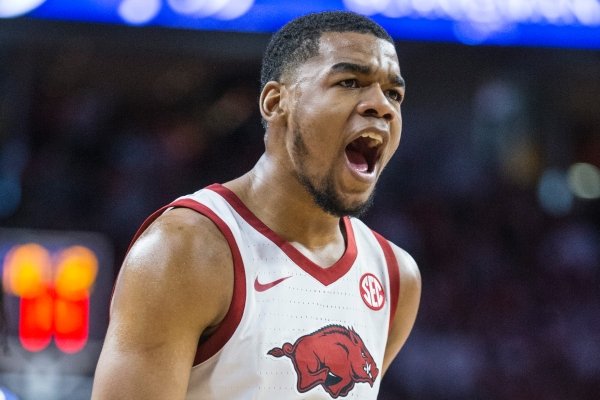 June 3 is the current deadline for underclassmen to return to school after going through the draft process. He has one season of eligibility remaining in college.

Jones is not considered a candidate to be selected in this year’s draft, according to 2020 mock drafts from The Athletic and ESPN. He is, however, rated the No. 14 draft-eligible shooting guard by ESPN.

Jones, who transferred to Arkansas from Connors State (Okla.) College ahead of the 2018-19 season, led the Razorbacks in scoring, rebounding, assists and steals last season. He was the lone SEC player to lead his team in each of those categories.

The DeSoto, Texas, native was a unanimous first team All-SEC selection as a junior and named The Associated Press co-SEC player of the year after averaging better than 23 points per game in conference play. He scored a career-high 41 points against Tulsa in December and 40 against Auburn in February, and had nine games with at least 30 points.

Jones, who became the first Razorback to win the SEC scoring title, was also named an AP All-American honorable mention. He is the eighth Arkansas player to earn the honor.

“Mason had a phenomenal season," Arkansas coach Eric Musselman said in a statement. "It came through hours of hard work and dedication as well as a desire to be the best player he could be. Our system gives players the freedom and opportunity to showcase their strengths and Mason took full advantage of it to become one of the top players in college basketball this season. We fully support Mason, and any player, pursuing his dream.”

The Razorbacks have had two players drafted since 2010 - Bobby Portis in 2015, Gafford in 2019 - and six since 2000. According to HogStats.com, 13 Razorbacks have remained in the draft before their senior season.

Williamson, Robinson and Brewer declared after their junior years, while the others were sophomores. Williamson, Johnson, Brewer and Portis were drafted in the first round, and Robinson and Gafford were second-round picks.