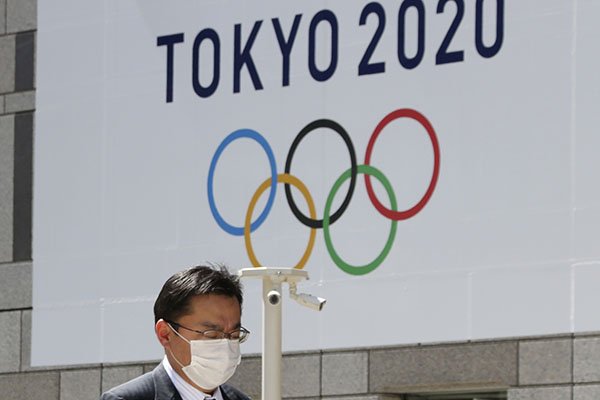 A man walks in front of a Tokyo Olympics logo at the Tokyo metropolitan government headquarters building in Tokyo, Wednesday, March 25, 2020. The Olympic torch relay was postponed Tuesday because the Tokyo Games themselves were pushed back to 2021. (AP Photo/Koji Sasahara)

FAYETTEVILLE — By first avowing, then deliberating, listening and finally postponing, the International Olympics Committee and the Olympics Games provided their greatest worldwide service.

Scheduled to span from July 24-Aug. 9 in Tokyo, the Games were officially postponed until 2021, the IOC announced Tuesday.

Some asserted the Olympics should have been postponed as the coronavirus pandemic now postponing them began taking lives in China and then Italy and Spain.

They have a point.

But there is the counterpoint certainly wrestled within the United States, even as epidemiologists and other health experts concur the coronavirus in our country is in early ascent rather than peaking, soon to diminish.

Our economy grinds to a near halt. Businesses big and small, particularly small among restaurants, bars and shops and so many others closed or curtailed, may not survive.

As the U.S. started March 12 shutting down its athletics, pro and college, the Games steadfastly remained on.

Within the U.S., postponing or cancelling the Olympics then would have been just one more sports event extinguished.

Maybe by late July we could hope viewing the Olympics as the sports beacon reopening our temporarily shut-in society. Maybe athletes training years for Tokyo could fulfill their dreams. Maybe Tokyo could reap the potential economic bonanza hosting the worldwide Games. No harm hoping a little longer.

By last weekend, the pandemic’s grip in the U.S further awakened the world. Athletic dreams must bow to grim worldwide reality. Livelihoods are vital to maintain but not so vital as maintaining life itself.

Some athletes and coaches so dedicated to their craft, might argue that point. And with conviction. If people are truly free, shouldn’t they be free to pursue their happiness at their own risk? And if those wanting to spectate believe it’s worth risking, shouldn’t they be allowed to attend?

The answer of course is that it’s just not their risk. Assembling a worldwide event, the masses come from everywhere, not just to watch but the accompanying workers doing anything and everything from officiating to assembling the venues. Eventually they all return to their countries after increased risk of close-contact exposure. They could further spread back home a virus for which there is no vaccine.

No, it’s not just their risk anymore. Especially at the increased risk of our overworked and reportedly often under-protected doctors, nurses and medical assistants and hospital staffs. They work for far more than a mere livelihood but an oath, saving and touching lives while pleading the rest of us to keep our distance.

Most of the world and its athletes knows and accepts this. Canada and Australia announced their athletes wouldn’t come this summer to Tokyo before the Games were postponed.

Tokyo’s postponement reemphasized first the world cohesively must contain this virus before we play game.