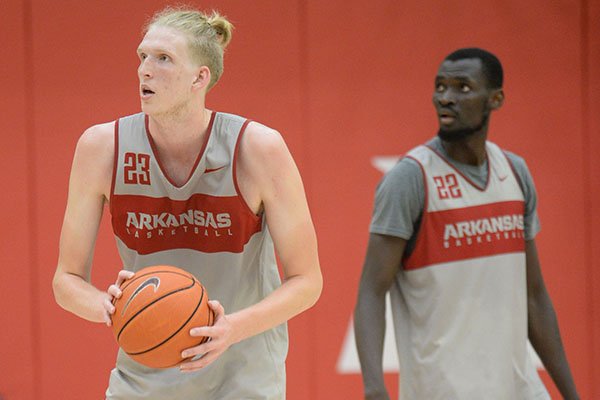 Arkansas forward Connor Vanover (23) takes a shot Thursday, Sept. 26, 2019, as forward Abayomi Iyiola walks behind during practice in the Eddie Sutton Gymnasium inside the Basketball Performance Center in Fayetteville.

FAYETTEVILLE -- In a video the University of Arkansas basketball team's Twitter account posted last week of Eric Musselman coaching his Razorbacks in an empty Walton Arena with no players on the court, he yelled for Connor Vanover to win the opening jump ball and JD Notae to form a seal on defense and cut off a passing angle.

Later in the humorous video, which lasts 2 minutes and 33 seconds, Musselman praised "Baybe" -- the nickname for Abayomi Iyiola -- for his defense.

Musselman's mention of Vanover, Notae and Iyiola in the video was a subtle reminder the three will be eligible to play for the Razorbacks during the 2020-21 season after they redshirted at Arkansas as transfers from other NCAA Division I programs.

Notae, a 6-2 junior guard from Covington, Ga., averaged 15.5 points, 6.2 rebounds, 3.4 assists, 1.6 steals and 29.1 minutes as a sophomore at Jacksonville (Fla.) University and was a second-team Atlantic Sun all-conference pick.

"He's a quiet guy that's really competitive and really tough-minded," Musselman said of Notae. "He can play two guard spots for us. He's a guy that can create his own shot. He's a guy that I think is going to be able to create offense through defensively getting steals."

Arkansas assistant coach Clay Moser worked with Notae, Vanover and Iyiola and walk-ons Ty Stevens, Emeka Obukwelu and Jamario Bell in three-on-three games after practice. Ethan Henderson, a sophomore forward this season, also took part in the three-on-three work until he got more playing time in games late in the season.

"JD has some very, very serious ability," Moser said. "He can score it, he can pass it. He's stronger than I thought -- just physically stronger -- where he can get in the paint and take some punishment with guys putting their bodies on him and it doesn't faze him.

"He's guy that can get to the free throw line. And he's got really, really good range on his jump shot. We expect him to be a major factor for us next year."

Vanover, a 7-3 sophomore from Little Rock, is back in his home state after playing at California as a true freshman. He'll have three seasons to play for the Razorbacks after averaging 7.5 points, 3.0 rebounds, 1.3 blocked shots and 17.5 minutes as a freshman for the Bears. Over the last 11 games he averaged 12.0 points and 4.7 rebounds, 1.9 blocked shots and 27.5 minutes.

"Connor changes the dynamics of what we look like when we get off the bus and in warmups," Musselman said. "We look different with him because of his size."

• Statistics for Arkansas basketball players JD Notae, Connor Vanover and Abayomi Iyiola at their previous colleges before they transferred and redshirted this season:

Vanover's size is much needed for the Razorbacks -- who didn't have a scholarship player this season taller than 6-8 and usually played four guards -- but he also is a good perimeter shooter. He hit 27 of 76 three-pointers (35.5%) at California.

Moser said Vanover clearly improved his overall game while getting stronger in the weight room.

"He still has a lot more room for growth, but that's pretty typical for a guy who's a bigger player," Moser said. "Bigs typically develop slower than smaller athletes. But he made great strides and we think he's going to be a true inside-out type of threat for us because of his sheer size.

"You can put him in the post, and and we believe he can score down there, and we all know he's a pretty dang good shooter on the perimeter from three-point range."

Iyiola, a 6-9 junior from Atlanta, averaged 10.8 points, 7.6 rebounds and 22.9 minutes as a sophomore at Stetson, where he played for Razorbacks assistant coach Corey Williams.

Iyiola, along with Vanover, should help Arkansas improve its rebounding. The Razorbacks ranked 342nd nationally in rebounding margin this season at minus-6.8.

"Baybe's a range rebounder, meaning he will run to the end of the earth to grab a rebound," Moser said. "He's very active, he's lively, he's long and he's in impeccable condition."

Despite Vanover's strong finish to his freshman season at California, he wanted a change after the Bears finished 8-23 and Wyking Jones was fired as coach.

"If you had told me a year ago that I would be coming to Arkansas, I wouldn't have really believed you," Vanover said Jan. 20 when he and Notae were guests on Musselman's radio show. "I just never thought I had a chance.

"But when Eric Musselman got the job and things didn't really work out at Cal, we got in contact with each other, and it was just a perfect fit. I think it's a perfect place for me to be back closer to home, closer to family in a great environment."

Notae, who said Musselman's hiring was a key to his decision to transfer to Arkansas, has four siblings.

"It helped me grow as a person, because everybody had to share," he said on Musselman's radio show of being from a large family. "It made me very unselfish. That's one thing I took from that."

Vanover and Notae were roommates this year.

"When I was younger, I used to watch Connor's mixed tapes, 7-3 dude shooting threes," Notae said. "It was crazy, because I never thought I'd meet him. Now we're teammates."

Vanover said he and Notae developed a good chemistry in the three-on-three games, especially on pick-and-roll plays.

"It's deadly, me and him in a pick and roll," Vanover said. "He's a really good player. He can do anything with it.

"Some days three-on-three, I just let him take control of everything. He does whatever he wants -- go to the rim, can step back and shoot it. He's real tough to guard. I really like playing with him."

Notae said Vanover is tough to guard when he sets a screen because he can roll to the basket or pop outside for a jump shot.

Vanover and Notae said they approached redshirting as an opportunity to improve.

"It's definitely tough knowing you're not going to be able to play in the games," Vanover said. "You've just got to have a different mindset of being able to take every day and make sure y0u get better for next year."

Notae said he wanted to make each practice count.

Vanover said the redshirting players took their roles on the scout team seriously.

"We had a very important job of trying to get these guys ready for each game," Vanover said. "So we take a lot of pride in our scout work, trying to teach them everything [opponents] do. Their tendencies, where they go, how good they can shoot."

Because the Razorbacks lacked depth this season, they didn't scrimmage during practice to make sure their top players stayed fresh and healthy for games. That made the three-on-three games after practice important for the players who were redshirting.

"It's not like being in a true game, but it was still live competition," Moser said. "I know it helped them."

Having three players redshirting, Moser said, helped them form a bond and lean on each other.

"I think it would be much harder to keep your focus and your drive if you were the only one going through [redshirting], but these three guys built a really nice camaraderie," Moser said. "I think the fact they were able to do it together was a big plus.

"They got along really well and kind of took on the form of siblings that love each other, but they'll get in some spats at times, which is OK. They look out for each other and they want the best for each other, so I think that whole deal was really positive thing for them."

Musselman said Moser graded Notae, Vanover and Iyiola after each of the three-on-three games.

"That was good to be able to give feedback to those guys on their matchups in three-on-three," Musselman said. "I think they did really well,"

The coronavirus has meant all of Arkansas' players are working out on their own for now, and Musselman said it's important for Notae, Vanover and Iyiola to keep improving.

"They still have quite a few months before they'll play a game in November," Musselman said. "So it's going to be important that they continue that. But now, obviously, they're a focal point in everything that we do moving forward."