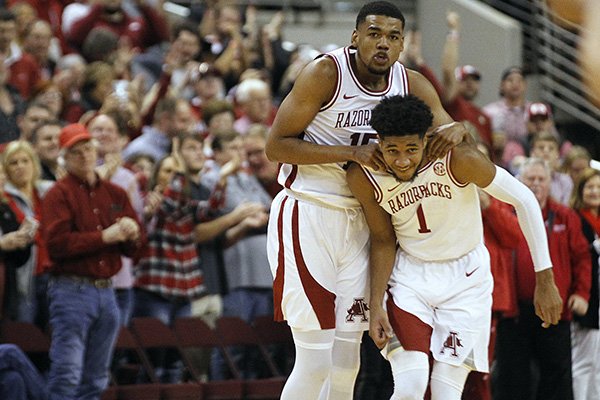 There were times last year when Mason Jones impressed thousands, including a 41-year veteran of covering Arkansas sports.

The University of Arkansas junior was nothing like the overweight, sassy kid who was recruited from Connors State College in Oklahoma.

His resume highlight was that his brother, Matt, played on Duke’s 2015 national championship team.

In the past two season, Jones has transformed into an SEC MVP by averaging 22 points per game and throwing in 5.5 rebounds, 3.4 assists and 1.6 steals.

Whether it was a key three, or twisting and shouting around defenders to bank in a nearly impossible shot, the thought never occurred that Jones was ready to take his 6-5 guard/small forward body to the NBA.

The question about his NBA readiness was much discussed among state media.

Also mentioned in the same breath is sharpshooter Isaiah Joe, the sophomore from Fort Smith.

On Friday, Jones answered by declaring for the NBA Draft, but with that comes a ton of different questions.

Is he going to sign with an agent? Will he be invited to the NBA combine? Will there even be an NBA combine, or will it be delayed because of the coronavirus pandemic that has yet to peak in our country.

In fact, the Democrat-Gazette reported Saturday that health models indicate there will be 100 times more cases in Arkansas in the next couple of weeks. Be careful. Practice social distancing, and wash your hands more than you want.

As for Jones, experts have him ranked just outside the second round of the draft, which means he would get a free-agent tryout with some team that won’t give him much consideration.

He could wind up playing overseas, but then there is that hated coronavirus again. Which countries will even allow Americans in?

Joe is rated by most experts to go late in the second round, which means nothing is guaranteed, just that one team liked him enough to reserve his rights.

One circulating rumor about Joe is that his parents, Derrick and Nicole Sue, are both UA graduates who are professionals and prefer that their son get his diploma first.

If Joe or Jones impresses a team but not enough to make a roster — which is where the serious money is — there is always the G League.

G-League players are scheduled to get a raise next season. The maximum pay would be $35,000, or $7,000 for each of the five months scheduled. During the season, housing and insurance benefits also are provided.

One thing both players also have to think about is that the Razorbacks are going to be much improved next season. Guaranteed.

A good team makes a good player look even better.

Both are young enough to take a shot at one more year of college basketball, help the team win 25 games, and make the NCAA Tournament with a shot at a national championship.

That’s a memory of a lifetime that also would increase their NBA stock. Maybe enough so to make them first-round draft picks, and that’s where the guaranteed big-buck contracts are located.

Jones has improved exponentially in two seasons. Just think what scouts might think if he made a similar improvement from his junior to senior season.

Joe can continue to show he does more than just shoot three-pointers. He’s an excellent defender and attempts to take more charges than anyone on the team.

All that said, if they do decide to pursue professional careers, they will be missed. I hope both of them make NBA rosters.