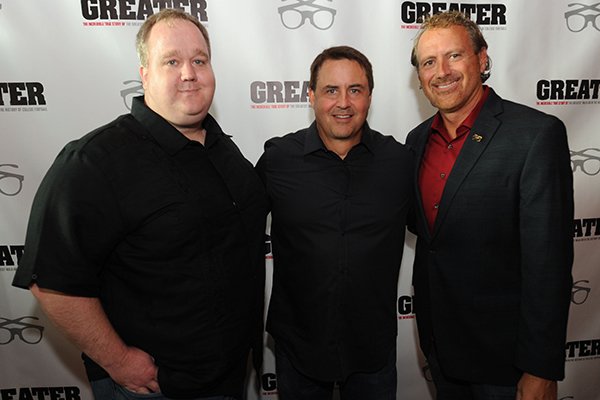 Director David Hunt (from left) poses Tuesday, Aug. 23, 2016, with producer Brian Reindl, and Marty Burlsworth, brother of Brandon Burlsworth, during a red carpet event ahead of the premiere of the movie "Greater" at the Malco Razorback Cinema 16 in Fayetteville.

FAYETTEVILLE — Marty Burlsworth remembers the day Brian Reindl came to Harrison to pitch his idea of making a movie about the life of Burlsworth’s late brother, Brandon.

It was 2005 and the Burlsworth family had already turned down multiple other overtures from filmmakers who wanted to make a similar movie, but would not allow the family to have say in how it portrayed Brandon, a walk-on-turned-All-America offensive lineman at Arkansas who died in a car crash 11 days after being drafted by the Indianapolis Colts in April 1999.

“My question to each of those people who contacted us out of California was: What input would the family have in how he was depicted on screen?’” Marty Burlsworth said. “The answer was always none because once you sign away the rights, they have to make a movie that they think will sell and do well in theaters. We weren’t comfortable with that, so we didn’t agree to any of those.”

The pitch from the Fayetteville-native Reindl felt different, though. He brought his wife, Missy, on the trip with him. There was humility when he said he had no experience in filmmaking, but was eager to learn.

Perhaps most importantly, he sought the family's advice.

“I think his wife sold us on it,” Burlsworth said. “She said, ‘Whatever he sets his mind to and whatever he says he’s going to do, he does.’ I could relate to that.”

Fifteen years later - and four years since its debut in theaters - Reindl is still working to promote Greater, the movie he produced and co-wrote with director David Hunt.

On Tuesday it became available on Netflix, the video streaming giant that has more than 60 million subscribers in the U.S. Netflix has rights to stream the movie in North America for the next year.

The movie spent the past two years streaming on Hulu, which outbid Netflix for its rights initially. Reindl said the movie’s distributor was approached by Netflix with a request to make the movie exclusive to its channel for the next year, although it can still be purchased or rented through other platforms.

Reindl said the movie will be exposed to twice as many people on Netflix as it was on Hulu.

“It works out nicely because of the timing with everybody at home looking for something to watch,” Reindl said, referencing the shelter-in-place orders across much of the U.S. in response to the coronavirus pandemic. “I’m just happy that people are going to get to see it.”

Users on the movie review website RottenTomatoes.com gave Greater a favorable rating in 85 percent of more than 3,100 reviews, and two out of three critics gave the movie a favorable score.

“Most of the critic reviews were good, but most of the fan reviews have just been really positive,” Burlsworth said.

“My hope and prayer are that this will be a springboard for it to connect to a larger audience,” Burlsworth said.