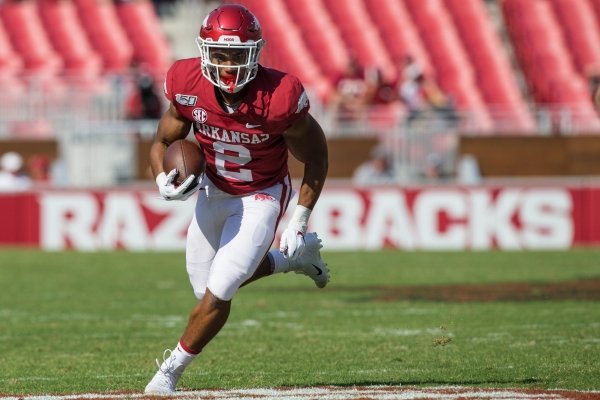 FAYETTEVILLE — Three months to the day after announcing he was transferring from Arkansas, running back Chase Hayden has found a landing spot.

Hayden, who played two full seasons at Arkansas and in four games last season to retain a redshirt, is headed to East Carolina. As a graduate transfer, he will be immediately eligible and have two years of eligibility remaining.

Hayden rushed for 574 yards and four touchdowns on 117 carries in his Razorbacks career, including 249 yards and three touchdowns as a freshman in 2017 before his season was cut short after seven games with a broken leg.

In his first career game, Hayden rushed for 120 yards and scored a touchdown on 14 carries against Florida A&M. He became the third Arkansas freshman to rush for more than 100 yards in his debut.

In 2018, Hayden played in 11 games and rushed for 251 yards, including a 38-yard touchdown against Vanderbilt - his only score of the season. Hayden also caught 11 passes for 61 yards as a sophomore.

He was limited to 45 yards on 12 carries in 2019 when he played in four games before entering concussion protocol.

A native of Memphis, Hayden committed to Arkansas as a 4-star prospect over an offer list that included six other SEC schools. The list including Tennessee, where his father, Aaron, played football before a 4-year NFL career.