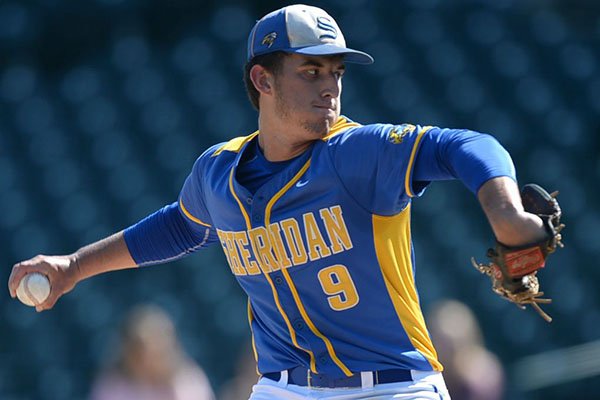 Sheridan starter Tyler Cacciatori (9) delivers to the plate against Benton Friday, May 17, 2019, in the Class 5A state championship game at Baum-Walker Stadium in Fayetteville.

There wasn't any last-minute waffling for Sheridan pitcher Tyler Cacciatori when it came to deciding where he wanted to play college baseball.

He made that clear when he committed to the University of Arkansas as a freshman.

Cacciatori At a Glance

NOTEWORTHY Committed to Arkansas as a freshman in 2017. … Also received offers from other schools, such as Kentucky and Arkansas State. … Was a Perfect Game preseason All-American last season. … Went undefeated last summer with the Arkansas Prospects. … Named to the Arkansas Democrat-Gazette All-Arkansas Preps baseball first team last year.

The 17th in a series recognizing some of the state’s best spring high school athletes who had their seasons canceled by the coronavirus pandemic.

He did have a tough time processing how his senior season was gone in the blink of an eye.

"It all happened so fast," Cacciatori said. "It was disappointing because I was really looking forward to the season. We had high expectations, but there wasn't anything we could do about any of it.

Sheridan shut out Benton 2-0 to win the Class 5A state baseball crown last season. The Yellowjackets were a threat to win a fourth title in six years thanks to a slew of returnees, led by Cacciatori, before the coronavirus pandemic dashed those goals.

The 6-6, 215-pound right-hander was coming off a junior year in which he went 8-1 with 61 strikeouts in 51 innings. He had an ERA of 1.23, and didn't allow a single run over his final two starts, including a 59-pitch, one-hit performance during a 10-0 pasting of White Hall in the semifinals of the state tournament. Cacciatori returned for the final game against the Panthers, allowing 4 hits in 6 1/3 innings while striking out 10.

"He's just so driven," Sheridan Coach Mike Moore said. "He gets in his mind what he's gonna do, and then he goes out there and pushes himself to do it. He's not real outspoken, but he's the kind of guy that makes his teammates better, makes the players around him better. A lot of times, you don't see that with really good players that are just focused on their stats or their accomplishments. But with Tyler, you never hear him say, 'Hey, I pitched a one-hitter last night and struck out 14.' "

Moore also noted that Cacciatori isn't the type of player who would boast about how many points he had in a basketball game, either, although he scored plenty. He broke the school record for points in a game with 53 to help Sheridan beat Stuttgart in December. He also had a 45-point, 14-rebound outing against Texarkana -- including a 42-foot game-winner at the buzzer -- in February.

"It was a really good season for us," Cacciatori said about basketball. "We were looking forward to going to the state tournament because we missed out on it the year before. We finished No. 2 in the conference right behind Hot Springs, which was a very good team. All in all, I thought the year went really well."

Cacciatori was intent on saying the same about the baseball season.

"Coming in, I was looking forward to winning it all again," he said. "We had almost everybody returning, except for maybe two or three guys. When I was still in basketball, I went out to [baseball practice] a few times, and all those guys were working really hard."

Several returning Yellowjackets were key players in last year's championship game. Senior Hayden Hicks had an RBI single, and junior Cooper Oliphant belted a home run to account for both of the team's runs. Senior Jackson Sorey also had a pair of hits, and junior Brandon Arledge -- a fellow Arkansas commitment -- picked up the save.

Sheridan finished 5-2 this season against what Moore described as stiff competition.

"It felt like we were setting ourselves up to go on a pretty good run," Moore said. "Our bats were coming around, and we were already pitching it well. It was shaping up to be something really special.

"In a coaching career, you only get so many times to have a special team like the one we had. Then, to not get to see what might've been was just a big letdown."

The Yellowjackets will field another talented team in 2021, but there will be holes for Moore to fill, with the biggest left by Cacciatori, who is preparing for life in Fayetteville.

"I've been kind of getting ready for summer ball by working out," he said. "I've been doing workouts around the house and at a baseball field. Still throwing bullpens and everything, so nothing has really changed on that end. I haven't been able to do anything in the gym, but I'm still trying to find ways to get things done."

Moore believes Cacciatori will excel as a Razorback.

"He's coachable, and that's what makes him so special," he said. "I think he's gonna carry over from what he's done in his career to this point. He steps up to the challenge. As the competition gets tougher, he gets mentally and physically tougher as well.