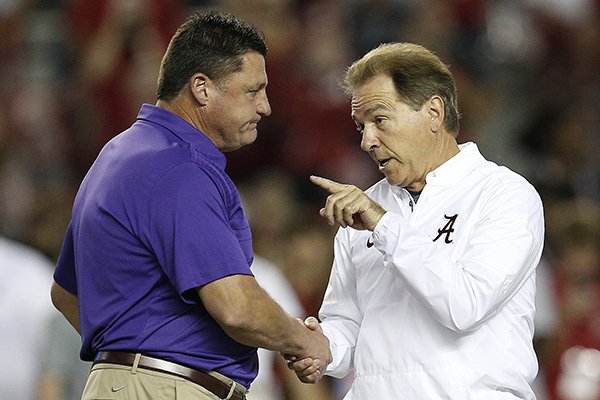 The best 25 college football coaches list compiled by CBSsports.com was an interesting read.

Let it be said, the website admitted it’s a subjective list made up of the opinions of its staff writers.

It also said the retirements of Urban Meyer (Ohio State) after 2018, and Chris Petersen (Washington) and Mark Dantonio (Michigan State) after last season offered some wiggle room for new coaches.

To save you the disappointment, no Arkansas Razorbacks coach made the list, although one Arkansan did.

Mark Stoops of Kentucky was the first SEC coach to show up, ranking No. 22. He has turned the Wildcats from pretenders into almost contenders in the SEC East. One remark is that if he continues his current wins-per-season pace, he will pass Bear Bryant’s 60 wins to become the Wildcats’ winningest coach at the end of next season.

Coming in at No. 18 was Fort Smith native Gus Malzahn. His agent, Jimmy Sexton, pretended Malzahn was interested in taking the Razorbacks job, and that persuaded Auburn to sign him to a $7 million a year contract. If he gets fired after this season, Auburn will owe him around $25 million.

There wasn’t another SEC coach until we got inside the top 10, which turned out to be SEC territory.

Dan Mullen at Florida was No. 8. He first made Mississippi State a winner before taking on a rebuilding job with the Gators. He is the only coach in the top 10 who hasn’t won a conference championship, but he does appear to be on his way to one. There’s a good chance he will become Razorback Nation’s favorite coach not at Arkansas, depending on how Gators transfer Feleipe Franks plays at quarterback for the Hogs.

Jimbo Fisher, Texas A&M, was No. 7. Fisher won a national championship at Florida State in 2013, which had to be why he was voted this high. In two seasons at A&M, he’s 17-9 overall and 9-7 in SEC play. He’s landed some good recruiting classes, but that’s the norm in Texas.

Kirby Smart, Georgia, was No. 6. There is no arguing the unfriendly, Nick Saban wanna-be has made the Bulldogs a contender. In the 2017 season, they were a couple of plays away from winning the national championship. Georgia is a recruiting-rich state with 40-50 high D-I players every year. His recruiting budget should be a tank of gas.

Ed Orgeron jumped from No. 30 last season to No. 4 after LSU won the national championship. It’s amazing the guy who left Ole Miss under a huge cloud of embarrassment has turned his outlook and attitude around so much. Louisiana is another state full of great athletes, and all he needs is for another Heisman Trophy-winning quarterback to fall into his lap.

Most won’t be surprised that No. 1 was Alabama’s Satan. Nick Saban has won six national championships, including his first at LSU. But the guy named No. 2, Dabo Swinney, is breathing down his neck.

Saban has a 12-year head start, but Swinney — who started as an interim coach at Clemson — may be outrunning Saban these days.

Swinney is the only coach to beat Saban more than once with the national championship on the line.

Still, Alabama had myriad problems when Saban broke his word and left the Miami Dolphins for the Crimson Tide, and he has dominated the most powerful football league in the land since his second season.

It is a little surprising that sports writers would vote him No. 1, but none of those wags cover him on a regular basis, so they don’t have to worry about Saban’s temper tantrums and acid tongue.