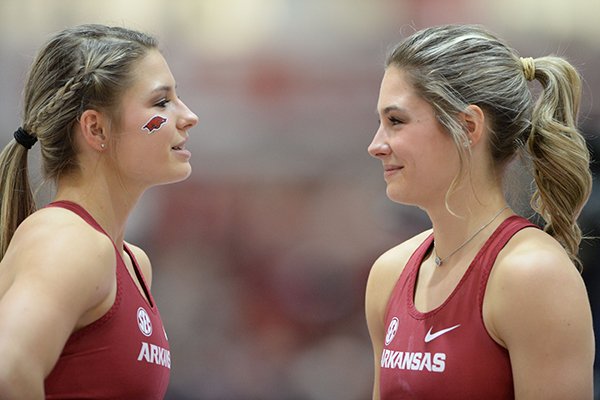 FAYETTEVILLE -- Lexi Jacobus and Tori Hoggard proved at the University of Arkansas they could compete at a high level in track and field as well as in the classroom.

The twin sisters from Cabot combined to win five NCAA titles and seven SEC titles in the pole vault, and earned 13 All-American honors from 2016-19. They also graduated with biochemistry degrees while maintaining 4.0 grade-point averages.

Now the twins are ready to again show they can excel academically while competing in the pole vault at a high level.

Both were accepted by the pharmacy school at the University of Arkansas for Medical Sciences in Little Rock, but they deferred enrollment for a year to focus on training for the 2020 U.S. Olympic Trials with the goal of qualifying for the Olympics in Tokyo.

With the U.S. Trials and Olympics postponed until 2021 because of the coronavirus pandemic, Jacobus and Hoggard have made the decision to begin classes at UAMS in August and continue their pole vault careers.

"We were headed into this year thinking, 'We'll see how it goes and if we're jumping really well, we'll probably stay with it and if not, maybe hang up the pole vaulting,' " Hoggard said. "But once we heard the Trials and the Olympics were postponed, I think we both really had that goal in mind that we wanted to go for another year.

The twins didn't want to defer pharmacy school for another year, though.

"We're ready to start school, but we also have those big dreams of going to the Olympics," Hoggard said. "We're going into this knowing it's going to be difficult, but that we have each other to rely on.

"We made it work as undergrads at Arkansas, so I don't see why we can't make it work in post-graduate school, too."

Pharmacy school is a four-year program, but how much longer the twins, 23, keep vaulting is uncertain.

"It'll be a season-by-season decision on vaulting," Jacobus said. "This next year we'll get an idea of how difficult it is to manage vaulting and pharmacy school, so that'll definitely play a factor in if we want to continue.

"If one of us or both us get a [professional] contract and make an Olympic team, that also would definitely play a huge role in whether we decide to keep going."

Jacobus, who won four NCAA and five SEC titles, made the 2016 Olympic team after her freshman year at Arkansas by taking third at the U.S. Trials.

Hoggard capped her college career by winning the pole vault at the 2019 NCAA Outdoor Championships.

"Lexi's already been an Olympian, but I haven't been to an Olympic Trials yet," Hoggard said. "So that's still on my radar."

"It was kind of inevitable the Olympics were going to be either canceled or postponed," Jacobus said. "For us, it wasn't a surprise. We figured it would happen, especially with travel being shut down in March.

"But it obviously was very disappointing for all of the athletes considering we've worked so hard in the offseason leading into what we thought was going to be the 2020 Olympics. You wait four years for the Olympics to come around, and you prepare for it and train for it, and then everything gets uprooted and you have to adjust."

Several meets set to be held this spring and summer were canceled, but the Diamond League -- a series of elite meets primarily held in Europe -- earlier this month released a revised schedule of 10 events, beginning in Monaco on Aug. 14. The lone U.S. meet on the Diamond League schedule is the Prefontaine Classic on Oct. 4 in Eugene.

But there are no guarantees any of those events will take place.

"It's really hard to know what to expect," Jacobus said. "And it's tough training with all the uncertainty, especially when you've been training since the fall. You've done all the training and preparing for months, and for what? It seems like for nothing, because there's nothing going on right now.

"It's tough to continue to push yourself through workouts, but I think it helps that Tori and I are going through this together. We're able to push each other."

If an indoor season is held in the winter of 2020, there figures to be some conflicts with meets and classes for the twins.

"I'm sure with the competition schedule, it's going to be difficult," Hoggard said. "But we've spoken to some people at UAMS who have said they're willing to work with us.

"It's something we'll definitely have to work hard at, but we're willing to make it work."

The twins are living in Cabot and training in familiar surroundings.

Five days a week they're at Cabot High School running and lifting weights. Twice a week -- on Wednesdays and Sundays -- they make the four-hour round-trip drive to Black Springs to work at the Arkansas Vault Club, owned by Morry Sanders, a coach and teacher at Lake Hamilton High School.

When Jacobus and Hoggard attended Cabot, they trained with Sanders at his vault facility, a building with two runways.

"Cabot High School letting us use their facilities has been such a blessing," Hoggard said. "Because we know that for a lot of people that transitioned from college sports to being professional, it's hard to find faculties to train at right now.

"There's a lot that goes into it that you don't think about when you're in college because everything's provided to you. So we've been very lucky."

Jacobus said the twins are grateful for their alma mater's help.

"The high school has everything we need except for vaulting," Jacobus said. "So we go to Morry's for that."

Jacobus and Hoggard said they're appreciative of the time they spent at Arkansas with field events coach Bryan Compton and everything they learned from him, but even after all of their success on the collegiate level, it's important they are again being coached by Sanders.

"Vaulting is so technical that it's very important to have a coach watching you and critiquing you," Jacobus said.

Their training regime now is a bit like stepping back in time as they're working on conditioning and vaulting at the same places they did in junior high and high school.

"We've grown up. We're both married now," Jacobus said. "We're different people, different athletes than we were four or five years ago. But it is comfortable coming back home and working at our old stomping grounds."

The twins are competitive, but also each other's biggest fans.

"We've always been best friends," Hoggard said. "It definitely makes all the hard work more fun, and I think it's made us better athletes and better pole vaulters always being there for each other."

The twins are in their 11th year vaulting together.

"It feels like we've been vaulting forever, but I also remember when we first started learning how to do it -- how to hold a pole -- in the seventh grade," Jacobus said. "Tori's the only person who's been in it with me the whole journey.

"So to share with each other all the successes, the failures, everything in between, it's been great."