Nevada coach had eye on upset loss for Hogs 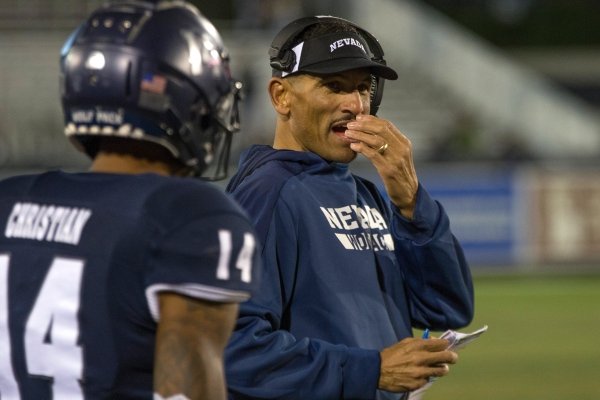 FAYETTEVILLE -- Jay Norvell's most intensive look at the University of Arkansas football team last season was a bad, bad look for the Razorbacks.

Norvell, entering his fourth year as head coach at Nevada, had a double purpose in checking out the Razorbacks' home game against San Jose State on Sept. 21.

Norvell's Wolf Pack had a road date at Arkansas on the schedule for Sept. 5, 2020, in the Razorbacks' home opener.

And Nevada was scheduled to face the Spartans a few weeks later at Mackay Stadium in Reno, Nev.

So Norvell gave the game a solid slice of scrutiny.

"Oh yeah, I've watched them," Norvell said of the Razorbacks in a recent phone interview with the Arkansas-Democrat-Gazette. "I watched them last year when they played San Jose from our league. So I did get a chance to see them last year and studied them some this spring."

His study last year saw an Arkansas defense that had trouble containing San Jose State senior quarterback Josh Love, who completed a 50-yard pass on the first snap of the game and engineered an upset as a three-touchdown underdog.

Love completed 32 of 49 passes for 402 yards with 2 touchdowns and 1 interception. After the Razorbacks tied the game 24-24 with 2:56 remaining, Love led the Spartans on a five-play, 77-yard touchdown drive to secure the 31-24 shocker.

Norvell's take on the Razorbacks kind of falls in line with the old adage, "If you don't have anything nice to say ..."

"You know, I think there's a lot of talent on that field," he said of the Hogs.

Norvell expects the Razorbacks to have a different energy with a change in coaching staffs, from the Chad Morris regime to Sam Pittman's group.

"I know they'll have a new staff, and they have new schemes that they're working on and they'll be energized to play," Norvell said. "So it'll be a challenge for us to come out there and play, obviously an SEC team.

"I have seen them, and it's always interesting to play people at the beginning of the year because there's so much unknown, you know. It'll be an important trip for us to go out there."

The Spartans, who had gone 1-11 in 2018, made an advancement last season with a 5-7 finish under third-year Coach Brent Brennan. They lost at Nevada, 41-38, three weeks after stunning Arkansas. In that game, Love completed 23 of 45 passes for 405 yards and 3 touchdowns.

But the Wolf Pack outgained them 189-15 on the ground, a statistical department in which the Razorbacks had just a 131-101 advantage against San Jose State.

Nevada has made strides playing on the road under Norvell since an 0-6 start in his first season of 2017, which included a loss at Northwestern. After losing nonconference road games at Vanderbilt (41-10) and Toledo (63-44) in 2018, the Wolf Pack won Mountain West road games at Air Force, Hawaii and San Jose State. They also went 3-3 on the road in 2019, though one of the losses was a 77-6 thumping at Oregon.

"He brought us back from 17 down," Norvell said. "We came back and won on a last-second field goal in his very first start. That gave him a lot of confidence."

Strong battled injuries and was replaced at times in October, but he rebounded to throw eight touchdown passes and one interception in the last five games, including a 17-13 upset at San Diego State.

"Sometimes if you step back off the field and just observe a little bit, it helps you see some things and the game slows down for you a little bit," Norvell said of Strong's October struggles. "He came back down the stretch and played really well, won three out of the last four of the regular season, got us in the bowl game.

"Then he threw for, I think it was close to 400 yards in the bowl game. He had a really strong bowl game. So we're really excited about him. He's a guy who's just scratching the surface of what he can do. He's 6-5 and 220-something pounds. He's a strong-armed kid. Really smart. Really competitive. He's what we look for in a quarterback. We're excited to build around him."

Strong completed 31 of 49 passes for 402 yards and a touchdown in the Famous Idaho Potato Bowl, but the Wolf Pack lost 30-21 to Ohio.

Nevada is slated to open the 2020 season at home Aug. 29 against UC-Davis before making the trek across the Rockies to face the Razorbacks.

"Our conference and our school has got a long history of traveling across the country and playing in different regions," Norvell said. "It's exciting for our kids and our program to go play an SEC team at Arkansas. We know that's a great environment.

"It'll be interesting what all these decisions about crowds and all that, what they're going to do with social distancing. It'll be a big thrill for our team to come out there and play, play on their campus. We always look forward to it and enjoy it. We typically come out -- when we cross those time zones -- come out a couple of days early. It'll be a good trip for us, and we're really looking forward to it."