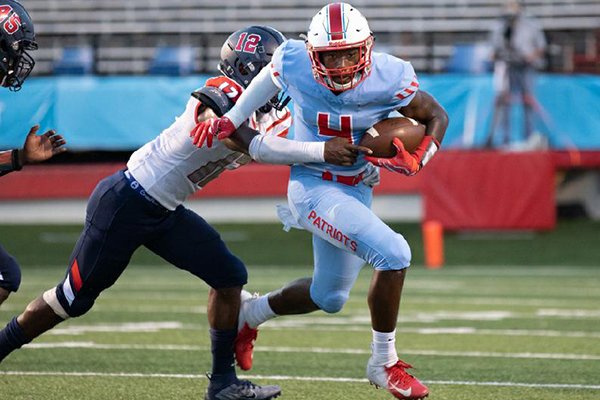 Little Rock Parkview running back Darien Bennett (4) runs with the ball during a game against Marion on Friday, Sept. 13, 2019, at War Memorial Stadium in Little Rock.

Little Rock Parkview freshman running back Darien Bennett grew up a Razorbacks fan, and when the University of Arkansas offered him a scholarship Thursday, he was very emotional.

“I jumped up, I couldn’t believe it,” Bennett said. “I’ve been working very hard. I’m very excited. My feeling right now, it’s the best feeling in the world.”

Bennett, 6-0, 215 pounds, rushed 34 times for 256 yards and 2 touchdowns before suffering a fractured tibia in the third game of the season. He’s the second in-state freshman to be offered by the Hogs.

Despite seeing Arkansas’ struggles the last three seasons, Bennett said he still gets a thrill going to games.

“I still love going, I love the intensity in the stadium,” Bennett said. “There’s not a better environment than [Reynolds] Razorback Stadium.”

His teammate and sophomore running back James Jointer also has an offer from the Hogs. The Razorbacks have a commitment from Patriots quarterback Landon Rogers for the 2021 class and are also recruiting highly regarded tight end Erin Outley hard.

Bennett credits his family, coaches and teammates for motivating him.

“A lot of thoughts of how the people around me have pushed me,” Bennett said. “I’ve been working really hard since I was 6 years old. Going out to compete with the guys and that push me to do my best.”

His family is full of Razorback fans with his aunt Stephanie Bennett being the most vocal.

“They loved it, they loved the news,” Bennett said. “They were very excited and happy for me.”

ESPN 4-star prospect Chance Moore and parents were impressed with their recent virtual tour with University of Arkansas Coach Eric Musselman and his entire staff.

The Hogs’ academics and nutrition programs stood out during the tour.

“Coach told me all of the players are exceeding academically and that they have the best food program in the SEC,” Moore said.

“I just like how they have a lot of support while on the road,” he said.

ESPN also rates him the No. 10 small forward and No. 47 overall prospect in the nation for the 2021 class. Musselman’s vast background that includes college and all levels of professional basketball impressed Moore.

“I like Coach Muss, he seems like a nice guy and a great coach with a lot of experience,” Moore said.

Moore, who expects to have another virtual tour with the Hogs in the near future, said his parents were pleased with Arkansas’ presentation.

“They liked the program and everything they had to say,” Moore said.