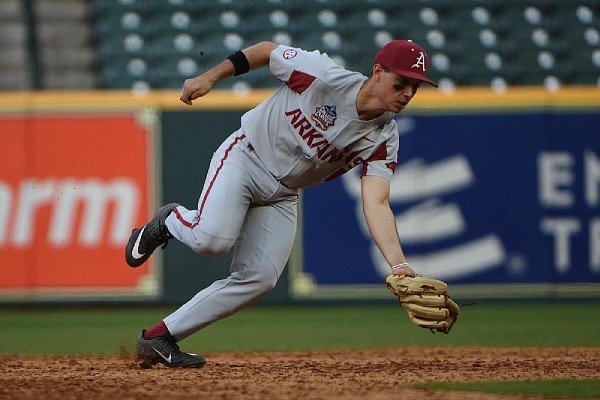 Arkansas freshman second baseman Robert Moore scoops up a ground ball during the Razorbacks’ loss to Oklahoma at Minute Maid Park in Houston. (Special to the Democrat-Gazette/Chris Daigle)

FAYETTEVILLE — Jalen Battles and Robert Moore were on opposite teams as shortstops during the University of Arkansas’ intrasquad fall World Series recently, but they’ll be working together as the Razorbacks’ double-play combination when the 2021 season starts.

Moore, a freshman again with the NCAA restoring eligibility for athletes in spring sports because the coronavirus pandemic canceled most of last season, will stay at second base. That’s where he started 15 of 16 games in 2020 — with one start at shortstop — and batted .317 with 2 home runs, 2 doubles and 17 RBI.

Battles, a transfer from McLennan Community College in Waco, Texas, will play shortstop. He’s a sophomore again after batting .303 with 2 home runs and 4 doubles with 18 RBI in 24 games last season for the Highlanders.

“They’ve turned some of the most incredible double plays I’ve seen,” Arkansas catcher Casey Opitz said of the Battles and Moore combo. “They’re just so fluid. They’re so advanced with fielding, and they can both handle the bat so well.”

“We both trust each other, and we know that any ball hit to us, we’re going to make the play,” Battles said.

“I love working with Jalen,” he said. “We’re just very clean and very sure. All of our throws are accurate.

“We’ve made each other better, I can tell you that. So, yeah, I think we’ll be a very good combination.”

Battles played at McLennan for Coach Mitch Thompson — the brother of Arkansas assistant coach Nate Thompson — so he was a natural fit for the Razorbacks.

“The first time I came on my visit, it felt like home already,” Battles said. “I fell in love with it once I was up here.”

“Once we found out it was a shortened draft, I decided just to come to Arkansas,” he said. “Coming here, I was going to get better, I already know that, and I feel like I’m going to do well here. So I’ll improve my draft stock.”

Arkansas pitcher Blake Adams said he’s been impressed by Battles at the plate.

“He’s a great hitter. Squares up a lot of balls,” Adams said. “Bat speed is unreal, so he catches up to a lot of things. It’s hard getting him off-balance.

“He gets me almost every time. He’s a great player, and he’s going to play a big role for our team. He’s just really good.”

Pitcher Lael Lockhart is a senior graduate transfer from Houston. He said he’s thankful to have Moore and Battles in the field behind him as well as producing offensively.

“Both of those guys get on base, hit for power, hit for average,” Lockhart said. “In the field, their range is kind of whatever they need to do to roll the double play or play the ball in the gap, shift.

“Whatever the case is, I mean, they’re going to be great for this team.”

Van Horn said Moore could play shortstop well, but that he doesn’t believe there’s a better second baseman at turning the double play.

“Robert’s very athletic and very aggressive,” Van Horn said. “Super quick hands. He can transfer the ball from glove to hand to on its way as good as any second baseman I’ve ever coached.”

“Jalen turns the double play coming across the bag as well as any shortstop that I’ve had with that arm strength and that accuracy,” Van Horn said. “I think both those guys are just steady.”