Pittman knows some recruits will be sight unseen 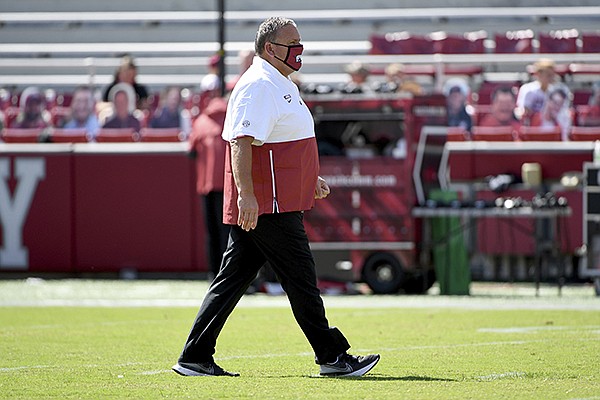 Arkansas football coach Sam Pittman is shown prior to a game against Georgia on Saturday, Sept. 26, 2020, in Fayetteville. (AP Photo/Michael Woods)

As a veteran coach, Sam Pittman has seen just about everything when it comes to college football recruiting.

But the first-year Arkansas head coach could never have liked what the covid-19 pandemic and the year 2020 would bring into the dynamics.

Several of his current 2021 commitments have not stepped on campus and he’s not sure how many current seniors will take advantage of a free year given to them by the NCAA and stay around.

A recent recommendation from the NCAA oversight committee to push the dead period back to April 15th means those recruits who have not seen campus likely won’t until the spring of 2021 at the earliest.

So how’s that stated intent of bringing in a 2021 recruiting class that would make his team bigger and stronger?

“I wish I could answer about the bigger and stronger, but we ain’t seen half of them,” Pittman said. “We don’t know what half of them look like. We have an idea, but it is all on film.”

A class that has 20 of 25 spots taken with 19 commits and redshirting Oklahoma wide receiver transfer Jaquayln Crawford is ranked 21st nationally by 247 Sports, 23rd by Rivals and 26th by ESPN.

That is an area of concern as Pittman has watched his team be overwhelmed at times in the interior line.

“Obviously on the defensive line, we have got to bigger over there and on the O-line,” Pittman said. “Those are where teams that we are playing are so powerful. They are just big and physical in the O- and D-lines as well as every other position, but those stick out.”

Pittman makes no secret of his plan to acquire more players on the defensive line be it a high school prospect, a junior college player or a transfer.

The high school/junior college defensive line prospects Arkansas is known to be pursuing are headlined by Atlanta (Ga.) Tri Cities three-star defensive tackle Cameron Ball (6-5, 300), who has Arkansas in his top five and is set to announce his decision on Dec. 16.

Arkansas, Ole Miss, Mississippi State and Missouri are among the schools Iton is considering.

Acquiring a player via the transfer route does not have to be a graduate to play immediately. It appears that a one-time transfer rule with immediate eligibility will be in place by August.

“Obviously there is a transfer world out there,” Pittman said. “We would take a D-lineman. We might even take, who knows, a linebacker. It just depends on if we can talk some of these guys into staying or not.

“But we are going to save some for transfers, for immediate need. Obviously everybody can see that the transfers we took last year, most of those have really helped us this year.”

Franks, Reed and Kelly have all had impact roles, Draper has been injured and Jacobs opted out early in the season.

“No. 1, right off the top of my head, is Feleipe Franks,” Pittman said. “He certainly has helped us, along with other guys, so we are going to save some to have the opportunity to do that again.”