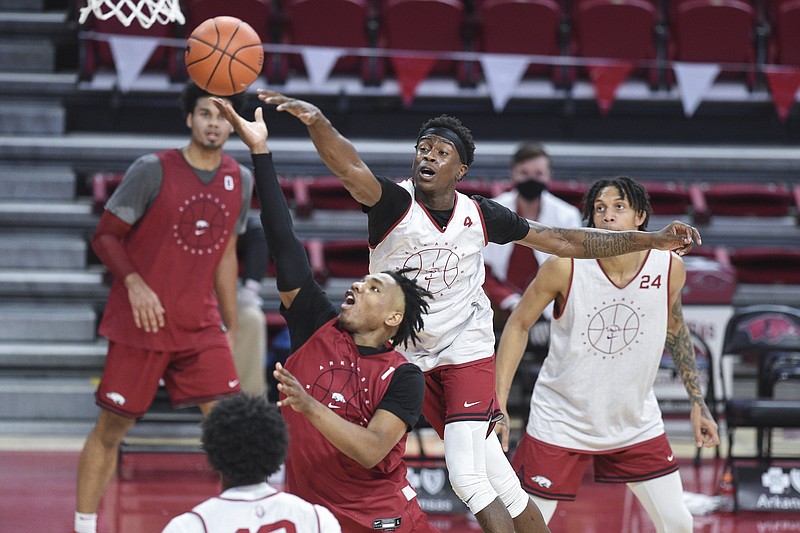 FAYETTEVILLE — Less than a week before the University of Arkansas basketball team opens the season against Mississippi Valley State on Wednesday night, Coach Eric Musselman said he doesn’t know who will start for the Razorbacks.

“I’m still trying to figure out the starting lineup,” Musselman said Friday. “I mean, I put them out there [Thursday] with what I thought they were going to be, and before I looked up, the other group was up 8-0.

“I don’t really know who it’s going to be. I’m not playing games or anything. I guess we’ve got a couple more practices to try to figure it out.”

“We’re obviously a work in progress. The guys have been working hard. Still going through different roles and rotations and so on and so forth.”

The start of the season was pushed back two weeks by the NCAA because of concerns about the coronavirus pandemic, so all college teams have been practicing without playing longer than usual. Teams also have a limit of 27 regular-season games.

“I wish we would have started on time,” Musselman said. “That’s my own personal opinion. I wish we were two games in and playing 30 games instead of a potential 27. It’s out of my hands, but I’m not sure what [delaying] the two weeks did. But anyway, here we are.”

Musselman said it hasn’t been easy having such a long training camp since teams were allowed to start having workouts in early July with full-scale practices starting Oct. 14.

“I tell the team all the time, ‘This is hard right now. I know it’s not fun. I know that boredom can set in,’ ” Musselman said. “I feel like I have much more of a player’s mentality [about practice]. I’m like them, I like the games.

“I hear coaches all the time talk about how they love to practice and all that. More power to those guys. I like practice a lot, but I mean, I’m doing practice so we can be ready for a game. The game day is what I like.”

“We haven’t hit a wall yet,” he said. “But we’re thirsty for some competition against somebody other than ourselves.”