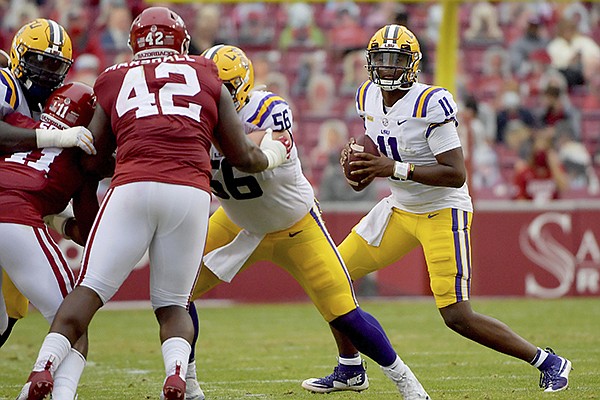 FAYETTEVILLE — University of Arkansas defensive tackle Jonathan Marshall couldn’t remember coming off the field on Saturday when LSU had the ball.

If Marshall lost track of one or two plays, it’s understandable.

LSU ran 91 plays on offense in the Tigers’ 27-24 victory over Arkansas at Reynolds Razorback Stadium compared to 53 for the Razorbacks.

“That was my first time playing that many snaps, to be honest with you,” said Marshall, a fifth-year senior and team captain. “It was a good experience for me to step up and be a leader for the people on the D-line.

“I mean, you get tired, but when your adrenaline is running out there on the field, that takes over. You forget how tired you are.”

Marshall was one of two defensive linemen for Arkansas — along with sophomore end Mataio Soli — for Saturday’s game who had significant playing experience. The position group was depleted by positive covid-19 tests and contact tracing.

Soli, who started 11 games last season after Gerald was sidelined by a neck injury, made his first start of the season. Redshirt freshman Taurean Carter made his first career start at the other end spot with Arkansas going with a three-man front.

“The bottom line is we had the numbers to play, and that’s the spirit of the game,” Arkansas Coach Sam Pittman said. “They don’t ask you who you have to play. They say do you have this amount of numbers? And we did.

“We want to play, and nobody said a word about it. To be honest with you, we should have played today and that’s what we did.”

SEC guidelines specify a team must have at least 53 scholarship players available — the Razorbacks had 56 on Saturday — with minimum numbers at certain positions.

“I think the rule is three or four D-linemen, and we had nine available,” Pittman said. “They just hadn’t played before. So I was proud of their effort. And they’ll continue to get better.”

Marshall, often facing double-team blockers, had four tackles, including one for a 4-yard loss. He also had two quarterback hurries and a pass breakup.

“J-Marsh, he continues to make us proud as linebackers, because he opens us up to make a lot of plays,” said Arkansas senior linebacker Grant Morgan, who had 19 tackles. “Our D-line, they did their jobs today.

LSU, playing for the first time in three weeks after an open date and postponement of its game against Alabama, took advantage of the Razorbacks’ inexperience on the defensive line to rush 49 times for 148 yards.

The Razorbacks sacked LSU quarterback TJ Finley just once when Morgan dropped him for a 5-yard loss, but the true freshman making his third start completed 27 of 49 passes for 271 yards and 2 touchdowns without an interception.

In LSU’s previous game — a 48-11 loss at Auburn — Finley threw two interceptions, lost a fumble and was pulled in favor of freshman Max Johnson.

“Finley has a lot of potential,” Morgan said. “He’s a good quarterback already. But he has a lot of upside as a true freshman to come out there with the poise that he had.”

Pittman said Marshall never asked to come out of the game and never complained about having so many linemen out.

Miller led the young linemen with six tackles. Carter had three tackles, and Thomas had two.

“They handled it very well,” Marshall said. “It was great to see them out there making plays.”