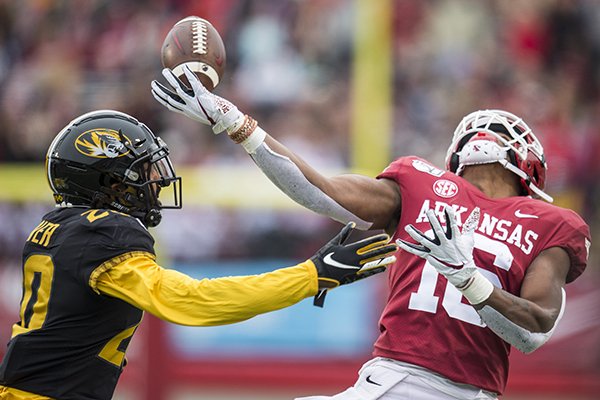 Arkansas receiver Treylon Burks tries to catch a pass while Missouri defensive back Khalil Oliver covers him during a game Friday, Nov. 29, 2019, in Little Rock.

FAYETTEVILLE — The Arkansas-Missouri game scheduled for Saturday was called off Monday due to covid-19 protocols that have left the Razorbacks without enough players to satisfy SEC roster requirements.

It is unclear whether the game will be made up on Dec. 12 or Dec. 19, when neither team is scheduled to play.

In a tweet, Arkansas athletics director Hunter Yurachek said he and Razorbacks coach Sam Pittman "are disappointed that we could not find a viable path for our student-athletes to safely compete at Missouri this weekend. We will use this week as an opportunity to get healthy again and we look forward to playing Alabama and Missouri to end the season."

Arkansas is scheduled to host No. 1 Alabama on Dec. 5.

It is not clear which threshold triggered the Arkansas-Missouri postponement, but the Razorbacks were without at least six scholarship defensive linemen for unspecified reasons on Saturday when they lost 27-24 to LSU. Arkansas had 56 scholarship players available for that game.

It is the first time the Razorbacks have had a game postponed due to coronavirus protocols. Missouri has had games against Kentucky, Georgia, Vanderbilt and Florida rescheduled.

Missouri will host Vanderbilt this week in a game that had originally been scheduled for Oct. 17, but had been rescheduled for Dec. 12 due to quarantines at Missouri.

A scheduled Tennessee-Vanderbilt game this week was postponed to make way for the new date for the game between the Tigers and Commodores.

Twelve SEC matchups have been postponed or rescheduled as a result of covid-19 protocols this season, including seven in the past three weeks. South Carolina is the only SEC team that has not had a game rescheduled this season.

Contact tracing has been cited by league leaders as the primary reason for the postponements. Team personnel are put into quarantine for two weeks if they are considered close contact with someone who has tested positive for the virus.

Those who test positive are eligible to return to team activities after a 10-day isolation period. Pittman was held out for 10 days — including for the Razorbacks' Nov. 14 game at Florida — after he tested positive for the virus Nov. 8.

Arkansas had not had a game postponed since 2008 when a game at Texas was pushed back two weeks due to Hurricane Ike.

CORRECTION: This story has been corrected to state seven SEC games have been rescheduled or postponed since the games originally scheduled for Nov. 14.