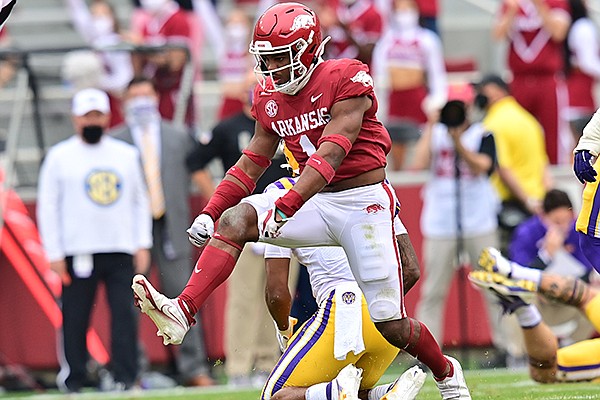 Arkansas safety Jalen Catalon (1) celebrates a tackle during a game against LSU on Saturday, Nov. 21, 2020, in Fayetteville.

It’s better to be lucky than good, but plain old good is best.

Ultimately, the All-SEC linebacker from 1993-96 was found and that interview will wait until the Razorbacks face Missouri. It will be worth the wait.

The first contact with Smith the coach led to a column on Jalen Catalon, perfect for the covid-19-induced bye week for the Razorbacks. It triggered a call to former Arkansas free safety Kenoy Kennedy to discuss safety play.

If there is a player in Arkansas history who compares to Catalon, it is Kennedy, a first-team All-SEC free safety in 1999 and a second-team selection in 1998. Kennedy made 95 tackles in ’98 and 98 in ’99. Most of them were violent collisions.

Kennedy’s vicious hits were legendary before he arrived at Arkansas. He was a terror in East Texas football at Terrell High School. Just a few days after signing day, Arkansas line coach Jim Washburn — who signed Kennedy — pulled me into his office to watch a highlight tape on Kennedy.

“You’ve never seen anything like this,” Washburn said. “I asked to see if the guy who took this hit ever got up, and he lived.”

And, there it was, Kennedy flying past the line of scrimmage to smack a running back catching a swing pass. Kennedy arrived at the same time as the football. A helmet flew 20 yards backward.

There have been three or four conversations with Kennedy over the last 12 years as Arkansas has often been without competent safety play. Yes, there have been a few stars like Ken Hamlin and Tony Bua, but it’s been slim pickings at safety since Kennedy left — until this season.

“It’s been a long time coming, but these guys like Jalen are bringing some life back to the Razorback defense,” Kennedy said in a phone interview this week. “It’s fun to watch.

“I’d like to win a few more games, but these guys are a breath of fresh air. I give defensive coordinator Barry Odom a lot of credit for the way this defense flies to the ball.”

It’s not just Catalon, a redshirt freshman from Mansfield, Texas. But Catalon has provided much needed leadership. Teammates say he’s the player who gets them right on alignment and scheme, a true coach on the field.

Kennedy isn’t surprised. He’s kept up with Catalon since early in his career at Legacy High School in Mansfield, just 63 miles from Kennedy’s home in Terrell.

“A girl I graduated with at Terrell teaches at Legacy,” Kennedy said. “She called me and said, ‘You need to watch this player.’ So I got on Hudl and Jalen was tremendous. I said, ‘Oh man, we could sure use him.’ He’s been all over the field for us this season.”

Catalon is second on the team with 86 tackles, along with three interceptions, two forced fumbles and one recovery. He had 35-yard interception return for a touchdown against Ole Miss.

Kennedy has season tickets for his family, but has watched from Terrell this season. It’s given him the opportunity to show replays on their big screen TV for his two football playing sons, 10th grader Ky and seventh grader Tyce.

“Every time we watch the Hogs, I tell them both, ‘Sit down here and see how you are supposed to play safety,’” Kennedy said. “We still have some tapes of Pops playing the game, so I can show them my technique, too. But you know how it is: sometimes they don’t want to listen to me. It helps to show them Jalen.

“It’s great to see someone playing safety like that. It reminds me of the old days, flying to the football.

“That’s what Coach Odom has done that has helped this defense, the way they keep coming. I tell my sons that they are like a wasp — you swat the first one, but there are more coming.

“I tell my sons, when you run to the ball like that, good things happen. That’s when you get the big hit, the forced fumble or the interception. You see that with No. 1.”

“They are both playing safety now,” Kennedy said. “Tyce is playing running back and safety. Ky is a straight safety.”

The targeting fouls are a big part of the discussion for Arkansas fans this week. Catalon has been ejected in the first quarter against Texas A&M and the fourth quarter against LSU. The second is the most difficult to understand.

“If they called (targeting) when I played, I would have been out every game,” Kennedy said. “I know it’s about player safety, but it’s a fine line and I don’t see that it was targeting this last one.

There were similar thoughts on Catalon from Smith, now defensive coordinator at Long Island (N.Y.) University. The Sharks did not play this season because of covid-19.

While at Arkansas, Smith was the lead recruiter on Catalon.

“Jalen, he’s a stud,” Smith said. “When the visitation period opened, I spent an entire 24 hours each week at Mansfield. It was us and Texas. I’d either be at the school, or at his home. That’s a great kid and a great family. We worked hard recruiting Jalen, but it was worth it, times 100.”

Catalon, a three-year starter at quarterback and defensive back at Legacy, missed most of his senior season with a serious knee injury.

“When he got to training camp the summer of 2018, his knee was still bad,” Smith said. “It hobbled him all of training camp. We were not sure he would be able to play.

“Then, he hurt his shoulder. We set the surgery date two thirds of the way through the season. The operation was scheduled to make sure he would be back for spring ball and still have four years of eligibility. He is special.”

Smith has watched the Razorbacks most of this season.

“Our family misses everything about Northwest Arkansas,” he said. “I’m so happy to see the guys have success this year. They deserve it. It’s exciting to watch the young players help this team.”