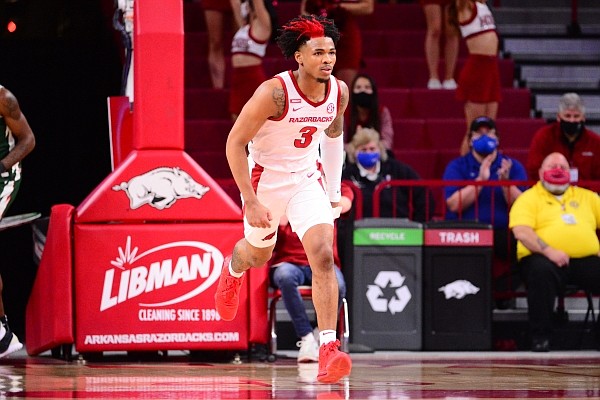 He did just that.

Between the abrupt end to the 2019-20 season and now, Arkansas’ junior guard commonly used the phrase in posts on his social media accounts both before and after various training sessions. The Razorbacks’ leading returning scorer, Sills was determined to attack the summer months and eventually return to campus a well-conditioned, much-improved player.

That mentality comes from being considered an underdog by many throughout his basketball career.

“You’re going to have people that knock you and criticize you each and every day, but you have to better yourself,” Sills said. “Even if you have an off day, you still have to wake up the next day and go attack it, attack the game. Just try to get better, no matter what people say about you.

“You know what you can do and you’ve got to keep getting better.”

Aside from Associated Press co-SEC player of the year Mason Jones, Sills was perhaps playing as well as any player on Arkansas’ roster when the team’s postseason run was cut short, shooting 50% from 3-point range in March. He was far from satisfied, and he continued to push himself.

Razorbacks coach Eric Musselman noticed upgrades in his game once the team reconvened in July.

“Last year, I think the surprise with Desi was his ability to score in transition and ability to attack the rim and be able to finish over bigger, taller, stronger 4 and 5 men, or power forwards and centers,” Musselman said. “He continues to shoot the ball at a good clip. I think his ballhandling is an area that he worked on.

“We feel like he's a better ballhandler than he was.”

That is a positive sign for Arkansas considering Sills owned the eighth-best offensive turnover rate (11.5%) in Southeastern Conference games last season, according to KenPom analytics. He finished with more than two turnovers in seven games but also turned in eight turnover-free outings.

Sills also spent a good portion of his offseason working to develop his pull-up jumper as well as his right hand, which should aid him in building on his 60 scores at the rim a season ago.

“I’m an upperclassman now,” Sills said. “I’ve got a lot of games under my belt, I know what the SEC is like and I’m just ready to showcase how hard I’ve been working all summer long.”

Sills’ strong finish to last season — nine double-digit scoring games, 45.1% from 3-point range in final 12 games — resonated with many coaches in the SEC earlier this month as he was named a preseason second-team selection.

The junior’s goal is to pick up where he left off and put his 2 for 30 start from 3 in 2019-20 out of sight and out of mind. Pushing through that rough patch was a challenge, but he did not leak confidence.

“I’m probably crazy for keeping shooting the way I did, but, like, I knew I was a good shooter, so I kept on going with it, staying in the gym,” Sills said. “I don’t want to go 0-for like I did the first couple games, but everything happens for a reason. If I’m a shooter, I’m going to keep on shooting.

“I felt like I was one of the hottest players in the country (late in the season).”

Musselman said Sills’ preseason recognition was well-deserved, but at the same time, it was only that, a preseason honor based on how he performed down the stretch in February and March.

Musselman also believes the third-year player wants to provide a veteran presence on the floor from the get-go and be in the starting lineup all season. However, he has proven to be very effective off the bench.

In 24 starts last season, Sills averaged 9.4 points and shot 25.2% from 3-point range. In the eight games he began the game on the bench, those figures jumped to 14.4 points and 55.6%. Bluntly, Sills relayed he does not have a preference.

“If I start, I have bigger goals — try to get SEC Player of the Year or get first-team, second-team or third-team (All-SEC). But again, it’s not all about me.

“It’s all about winning, winning games to get to the NCAA Tournament and try to win the SEC Tournament as well.”

Sills opened his junior season in style Wednesday, finishing second on the team in scoring with 19 points in Arkansas' 142-62 win over Mississippi Valley State. He made 6 of 7 shots inside the arc and 2 of 3 beyond it.

Sills added three steals as well, his most in a game since the Razorbacks' home loss to Auburn on Feb. 4.

“He’s been paving the way for us,” freshman guard KK Robinson said. “He’s been there and played on that level we’re about to play on. He’s showing us we can’t take (plays off) because if we do that in a game, it’ll cost us.”