Jonathan Marshall is a picture of perseverance 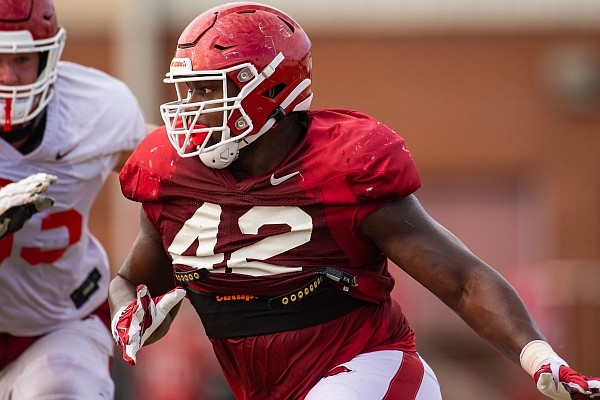 Arkansas defensive lineman Jonathan Marshall makes a move into the backfield during a preseason practice on Sept. 21, 2020 in Fayetteville.

FAYETTEVILLE — Chip Keel realized in no time at all that there was something different about one of his freshmen.

A former head football coach at Shepherd (Texas) High School, Keel came to that understanding one afternoon in the program’s weight room, where an already physically imposing Jonathan Marshall was putting on quite a show of strength and athleticism.

Quiet by nature and reserved, Marshall truly blossomed in the weight room. Keel witnessed his soon-to-be star jump flat-footed onto a 48-inch plyo box that was topped off with five 45-pound rubber power-cleaning plates, which were roughly four inches thick.

“We knew he was pretty special to be that big and explosive, too,” Keel said. “The strength and conditioning coach at Shepherd was tough as nails and rode Jonathan hard as a freshman and sophomore. I’ve had some small guys who could get up.

“But he was probably the most special one I’ve ever seen. For that to happen, that’s pretty special.”

Another example of Marshall’s strength can be found on the coach’s Twitter account. In a video posted March 5, 2015, he is shown jumping on top of a stack of eleven 45-pound plates while holding 30-pound dumbbells in each hand.

He did it five times in the 18-second clip.

Marshall’s fondness of the weight room undoubtedly traveled with him to Arkansas, where he has for years been labeled the strongest player on the roster by strength coaches and teammates. His drive, maturity and consistent training habits also earned him a new title in 2020: team captain.

He is not much for talking. After being named one of four captains for the season, Razorbacks coach Sam Pittman asked Marshall if he would like to deliver a speech before the team. Humbly, he declined.

“He’s quiet, but he’s a hard-working guy,” Pittman said this week. “He has the respect of the team because they voted him a team captain, but much respect from us, our coaching staff and myself personally. He’s a hard-working guy. He’s one that if everybody on the team worked like he did, you’d have a fine football team.

“Just much respect. He’s a college graduate already, and just very, very proud of him. He handles himself off the field like he’s supposed to handle himself.” 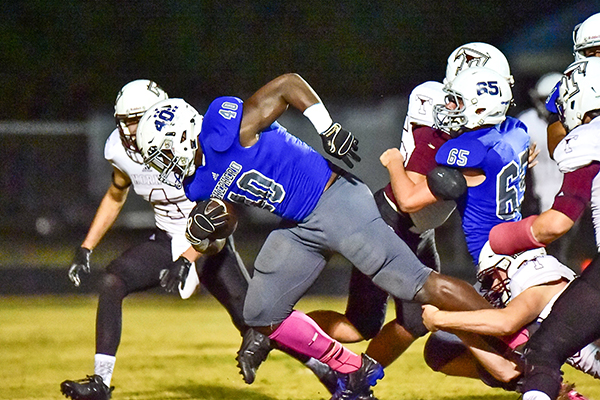 Jonathan Marshall played on the defensive line as well as tight end, fullback and running back at Shepherd High School in Texas.

Shepherd is a town with a population that sits slightly above 2,000, and it is the one that shaped Marshall, a redshirt senior defensive tackle.

A Sonic, a few convenience stores and a grocery store is nearly all it has to offer. It is the kind of place, too, that has seen high school seniors drive lawnmowers to the campus as a class prank.

“Coming from Shepherd, it was crazy,” Marshall said this preseason. “Coming (to Fayetteville) around a lot of people, it makes you a little nervous at first.”

Shepherd is where he tried his hand at a number of different sports, including basketball, baseball and track and field, and ultimately developed into a coveted Division I football prospect. Marshall played varsity football for Keel as a freshman and it was fairly evident he had real potential.

Keel said Marshall was probably “a little bit too nice” early on in his high school career, but he flipped a switch midway through his sophomore season and finally understood he was really good — a lot better than everyone else he went up against.

In addition to playing both tackle and end on the defensive line, Marshall lined up at running back, fullback and tight end for Shepherd.

“It was almost impossible for a high school offensive lineman to block him,” Keel said. “He led our team in (rushing) touchdowns as a senior. He was a 4.7-second 40-(yard dash) at 270 pounds and strong. We started handing him the ball as the tailback and people just moved out of the way.

“They didn’t want any part of that. He caught balls for us, caught touchdown passes and ran for touchdowns.”

Marshall, an Oklahoma State verbal commit prior to flipping to Arkansas late, was so gifted as a tight end that Cowboys coach Mike Gundy presented him a set of goal-line designs at a dinner during a recruiting visit that he called “The Marshall Package.”

Coming out of high school, he was rated a top-50 prospect in Texas by 247 Sports and the No. 11 defensive end in the state, according to Scout. As a senior, Marshall earned Class 4A All-State second-team recognition.

He landed on Arkansas following an eye-opening visit with his mother and family friends on the final recruiting weekend in January 2016. Marshall returned home fired up to be a Razorback, Keel said.

“He gets up there and he had some pretty good guys playing D-line around him, so he’s been having to battle the whole time,” said Keel, who now coaches at Splendora (Texas) High School. “He’s had to learn to play technique because he was so dominant in high school he didn’t have to play with great technique. He went through defensive coordinators and one guy was wanting defensive linemen to read and play at the line of scrimmage.

“Other guys want him to penetrate. He’s went through a lot to get where he’s at. He never complains. He’s persevered through all of it. He’s a picture of perseverance.” 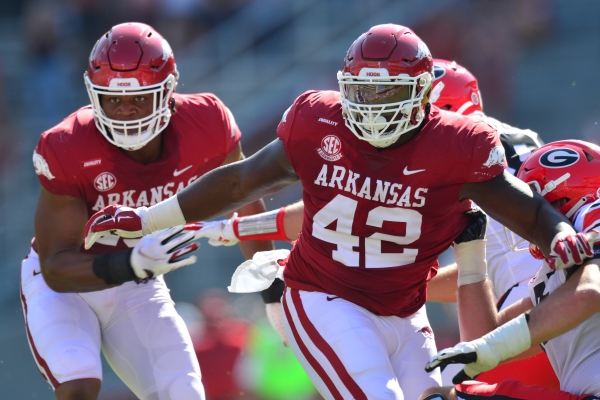 Arkansas defensive linemen Julius Coates (left) and Jonathan Marshall (right) look to make a play in the backfield in the Razorbacks' season opener against Georgia on Sept. 26, 2020 in Fayetteville.

Razorbacks linebacker Grant Morgan, another team captain in 2020, describes Marshall as a gentle giant and one of the most loving people he has ever been around away from the field. Between the lines, Marshall is the most powerful he’s played with.

Keel knows Morgan’s words to be true. From the very beginning of their time together, Marshall exuded leadership and a heart as pure as one could imagine.

“He was a really a phenomenal kid,” Keel said. “He never got in an ounce of trouble, never had a referral, always dependable, never late for a practice. Just a great human being. He’s got a little country to him. He’s not afraid to jump on a horse and ride a horse.

“He’s just kind of a sweetheart of a kid. I never outside of football saw him lose his temper with anybody. You’d have no idea that he could be as dominant as he was in high school because he has a great heart and is a great person.”

Marshall is striving this fall to become a force on the Razorbacks’ defensive line following the departure of veteran tackles McTelvin Agim and T.J. Smith. He earned the first start of his college career in Week 1 against No. 4 Georgia and tallied a pair of tackles and a quarterback hurry.

Now a leader on defensive coordinator Barry Odom’s unit and a staple in the lineup, coaches and teammates are expecting a productive season from Marshall, who entered 2020 with 35 career tackles and five for lost yardage.

“He takes on two, three people at a time and moves them around like it's nothing,” Morgan said. “He's a guy I'll be able to call brother the rest of my life just because I've known him. We've been through three head coaches now. We've been able to go through the fire.

“We've seen success and we've been through it all, so being able to be a captain with him next to me — (captains Rakeem Boyd and Feleipe Franks) are transfers and I love them just as much — but me and J-Marsh being able to come from the very beginning ... just be able to stand next to him on Saturdays when we walk out there is a big deal. He's one of those guys that I'll lean on. He leans on me.

“I wouldn't want anyone else over there.”