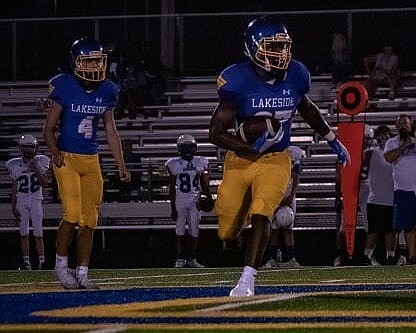 Few freshmen are worthy of being noticed by college coaches, but Hot Springs Lakeside running back Braylen Russell is an exception.

“I haven’t talked to college coaches about ninth graders, but when you talk about him and turn the film on, they start listening,” Rams coach Jared McBride said.

Russell, 6-0, 212 pounds, is physically mature beyond his years and looks more like a senior than a freshman.

“I haven’t seen at any level a ninth grader that’s as physical and talented as he is,” McBride said.

Freshman are not elevated to varsity until after the junior high season is completed.

“He can play for us right now in high school and compete at the very highest of levels,” McBride said. “Hopefully he’ll continue to develop. He has a very bright future.”

McBride said Russell has shown his speed against teams loaded with quickness like Camden Fairview, Hot Springs and Arkadelphia.

“He’s fast,” McBride said. “We played against some good little junior high teams already and he’s running away from people. He’s outrunning them all.”

The ninth grade team is loaded with talent and has won most games going away.

“He might get six touches and three of them will be touchdowns,” McBride said.

Russell has a great attitude.

“He’s a great kid off the field,” McBride said. “He’s got a level head. He wants to compete against the best and we’re going to find a way to get him there.”