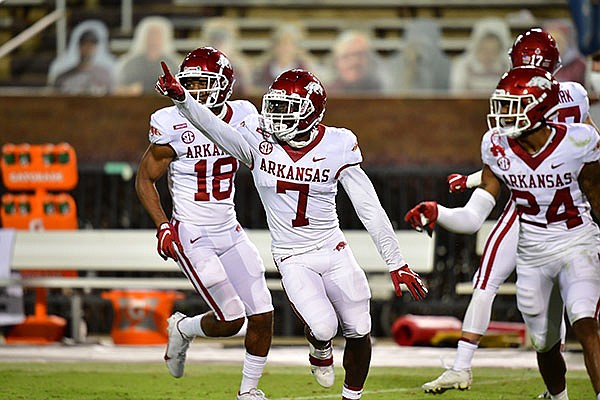 Arkansas safety Joe Foucha (7) celebrates after intercepting a pass during a game against Mississippi State on Saturday, Oct. 3, 2020, in Starkville, Miss.

FAYETTEVILLE — To say Arkansas defensive backs Joe Foucha and Greg Brooks are confident would be an understatement.

They have reason to be. In the Razorbacks' thrilling 21-14 win over then-No. 16 Mississippi State on Saturday, the duo combined for three interceptions of Bulldogs quarterback K.J. Costello, who one week earlier set school and conference passing records at LSU.

Brooks' pick-6 — the first of his football career — put Arkansas ahead 7-0 early in the first quarter, and Foucha's two interceptions helped the Razorbacks maintain a lead on the road. On Monday, he shared SEC co-defensive player of the week honors with linebacker Bumper Pool.

"They give us a good game plan and they give us that confidence that we’re going to win every single week and dominate every single week," said Brooks, whose interception return for a score was the first by a Razorback since 2016. "So we just go out there and ball."

"That's going to show consistently throughout every game."

Tackling in space was a major point of emphasis for the Razorbacks entering Week 2. Mississippi State burned LSU to the tune of 381 yards after the catch in the season opener, but the Bulldogs' big plays in the passing game were limited Saturday.

Mississippi State tallied four pass plays of 15-plus yards in the loss, and three came in the first quarter. The Tigers allowed 16 such plays, which resulted in 501 passing yards.

"Tackling, during practice (coaches) emphasize that – every single day," Brooks said. "Even on Thursday, we’ve got to thud up no matter what. We’ve gotten a lot better at that."

While confident following a big win, Foucha's main takeaway from the game is that players cannot become complacent. They cannot become big headed, either. Finding a middle ground is critical entering No. 13 Auburn this weekend.

With that said, the junior did send a message to Auburn sophomore quarterback Bo Nix and his skill players, particularly Seth Williams and Anthony Schwartz, who have been targeted a combined 42 times in two games.

Brooks said there will be no extra emotions for him facing Chad Morris, the former Arkansas head coach who is now the offensive coordinator at Auburn. It will be just another game, he said.

Foucha is in the same boat, noting Arkansas will be ready for whatever Morris throws their way.

"We're just ready to go play, to keep showing the world what we have here at Arkansas. That's what we're going to do."