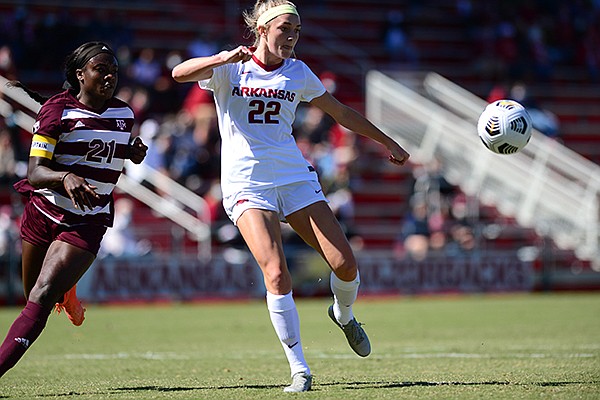 Arkansas' Parker Goins (22) advances a ball during a game against Texas A&M on Sunday, Oct. 4, 2020, in Fayetteville.

FAYETTEVILLE — Arkansas women's soccer turned national heads by pulling what the rankings indicate was an upset, but what confirmed the preseason SEC polls.

The Razorbacks beat Texas A&M, 2-1, in a home match televised by the SEC Network. It was a fun afternoon with the nation's top women's soccer analyst on the call.

Julie Foudy, one of the top players ever for the USA national team, called it a fair result with the then-No. 9 Razorbacks beating the No. 5 Aggies.

Arkansas jumped to No. 3 in the latest poll Tuesday.

Texas A&M may have been higher ranked ahead of the game, but SEC coaches voted the Razorbacks as the preseason favorite ahead of the season.

It was a pleasure to listen to the breakdown of the game on TV from Foudy. Her pronouncement after the game was that it was the proper result, meaning the best team earned the victory.

That doesn’t always happen in soccer. A team can dominate in some respects, but a fluke goal gets in and they pack it in on defense and sneak out with a victory.

Foudy said the game easily could have been a 4-0 Arkansas victory. She said the Razorbacks were the dominant team. Indeed, the home team took it to the Aggies most of the game and had the better chances to score throughout.

I was traveling home from Starkville, Miss., and missed the start of the game, but saw most of it. I loved hearing a good analyst describe the action. Foudy is one of the best. She breaks it down a little better and her raw emotions of a great play come through.

I have followed her for a few years. When she is on the call, or doing analysis, I pay attention.

Sarah, my daughter, told me years ago that Foudy was her favorite player. I’ve paid attention to her ever since. Sarah played college soccer and is my go-to source on soccer happenings.

Foudy quickly noticed in the game that A&M’s talented back line — usually a bunch that overlaps and goes forward — was pinned back by the speed of sophomore Anna Podijil and senior Parker Goins and would not be able to advance to the attack per the usual.

I watched for that as a sign that the Aggies were gaining momentum and it never happened. They tried once and the counter attack from the Razorbacks was so overwhelming that they didn’t try it again. You don’t want to see 5-on-3.

Arkansas won the 50-50 balls all day. It was typical play from a Colby Hale-coached team and a pleasure to watch. The possession and passing of this team in the first game was not great, but it’s been really good against A&M and Kentucky and I bet it gets better.

There are players on this Arkansas team that you may see on the national stage in two to three years. There is that kind of speed and ability. I’m also interested to see if Podijil is able to do some things for Lance Harter’s track team.

She has great speed, and Hale said Harter thinks she can score points in the 400 meters.

One thing to note is the way Hale is rotating his goalies. He’s splitting two goalies by halves between Alexis Bach and Taylor Beitz. Foudy said she didn’t like goalie changes, but gets it in this respect.

Hale told her that he was preparing for the possibility of covid-19 quarantines. You could be in the heart of a season and have to change goalies and use someone with no game experience. Generally, you play one goalie for the duration of the season. I like his thinking.

There is a lot to like about this Arkansas soccer team. There is no surprise with a 3-0 start. The Razorbacks are the defending regular-season champion in the SEC.

The national poll voters didn't get it before Sunday, but they do now.