Arkansas vs. Auburn: How to watch and listen, betting line, team comparisons 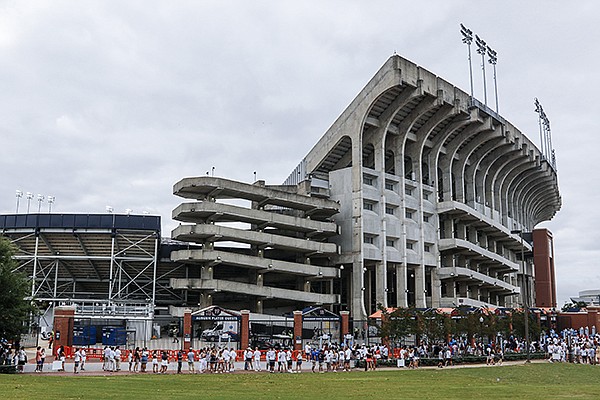 WHERE Jordan-Hare Stadium, Auburn, Ala.

COACHES Arkansas: Sam Pittman - 1-1 in first season at Arkansas and overall in Division I; Auburn: Gus Malzahn - 63-32 in eighth season at Auburn and 72-35 in ninth season overall.

TELEVISION The game will be televised by ESPN and streamed on ESPN3.com and the ESPN app (carrier login required).

WEATHER According to the National Weather Service, Saturday will be cloudy with a 90% of showers and possibly some thunderstorms, and a high of 79 degrees in Auburn, Ala.

NOTABLE: Former Arkansas head coach Chad Morris is the offensive coordinator at Auburn. Morris is the first former Arkansas head coach to coach in a game against the Razorbacks since Jack Crowe was Jacksonville State's coach in 2012....Auburn has won four straight games against Arkansas by a combined margin of 157 points. The Tigers' win margin in the past four games has been 53, 32, 31 and 41 points. The Tigers had never defeated an SEC opponent by 30-plus points in four consecutive years....Both teams have lost to No. 3 Georgia this season. The Razorbacks lost to the Bulldogs 37-10 in the season opener, and the Tigers lost at Georgia 27-6 last week....Auburn All-SEC linebacker K.J. Britt will miss the game after undergoing surgery on his thumb....Auburn receivers Seth Williams and Eli Stove, and running back Shaun Shivers are questionable for the game....Arkansas running back Rakeem Boyd and defensive end Dorian Gerald are questionable....The game was originally scheduled to be shown on SEC Network but was moved to ESPN as part of a rearrangement of TV plans caused by Hurricane Delta.