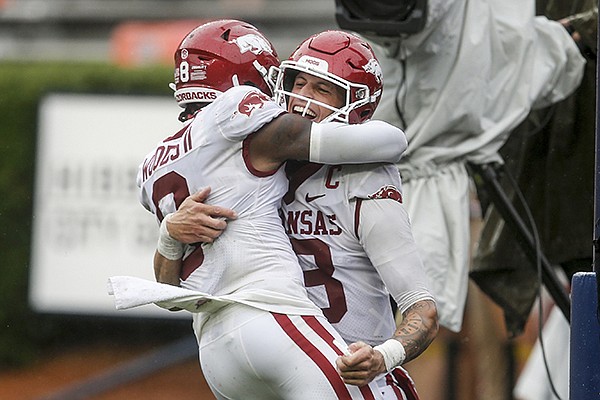 FAYETTEVILLE — Can the Arkansas Razorbacks handle a full-fledged football shootout?

That’s the question that might get answered when the University of Arkansas (1-2) faces its sternest defensive challenge yet against the dynamic Ole Miss Rebels (1-2) on Saturday.

There have been plenty of positive signs from the Arkansas defense coordinated by Barry Odom through three games, but nobody has really slowed down the new-look Rebels, who average 42 points and 573 yards per game.

As a comparison, the Razorbacks struck for a season-high 437 yards in last week’s game at Auburn.

So the slow-starting Arkansas offense is feeling the pressure this week, as stated bluntly by Coach Sam Pittman.

“What’s the best word for highest amount of pressure possible?” Pittman asked in response to a reporter’s question about the pressure on the Hogs to light up the scoreboard. “What is that in the dictionary? Because that’s what it is.

“We better score. Our offense better come to play, because their offense is unbelievably good. I mean, it just is. So does it add extra? Yeah, it does.”

Quarterback Feleipe Franks added a little more context to a question about the pressure.

“I think that it’s just doing what we were coached to do.”

Added wideout Mike Woods, “We just can’t make mental errors, stupid penalties and shoot ourselves in the foot. We can’t stop ourselves.

“If we don’t stop ourselves, I don’t believe anybody can stop us. So it’s really about what we do.”

There is good news for the Razorbacks on three fronts: Recent performance, the opposition and the injury report.

The offensive unit found its best rhythm of the season last week against a quality Auburn defense by scoring on five of six possessions in the middle part of the game, with the only nonscoring series beginning with 38 seconds left in the first half.

Each of those scoring drives resulted in a touchdown with the exception of a 70-yard series that reached the Auburn 5-yard line before freshman quarterback Malik Hornsby came in for a goal-line package that didn’t work.

Franks had his best game as a Razorback by completing 22 of 30 passes for 318 yards and 4 touchdowns in wet and windy conditions. A few of his throws in the first half were clearly affected by a strong wind sweeping through Jordan-Hare Stadium.

“They go fast,” Ole Miss Coach Lane Kiffin said when asked about Franks’ transition from Florida to Arkansas. “There are similarities in that. He’s done a really good job coming over there, which is tough, because he had no spring ball as well. They’re doing a really good job.”

Franks has been sacked eight times, several of them when he appeared indecisive between throwing a pass away or tucking the ball and running.

“I just think that if he knows it’s not open, he probably would tell you that he probably needs to make a little bit quicker decision if there’s nothing there to tuck it and go get what he can get,” Pittman said. “But I wasn’t displeased really even with the sacks that he took.

“It was so wet and windy, I think he might have been afraid of trying to make a play that he normally would make in different conditions. I was pleased with what he did, but I think he probably would make a little bit faster decision on, ‘Hey, maybe I can take off and run a little bit here.’ ”

Slot receiver De’Vion Warren and tailback Trelon Smith continue to emerge on offense, and a couple of veteran offensive linemen in Ty Clary and Dalton Wagner subbed in and provided solid play during the scoring streak.

Smith was dangerous running and catching, combining for 159 yards and a touchdown, while Warren caught 2 touchdown passes among his 5 receptions for 95 yards.

The skill group could expand this week with the potential return of tailback Rakeem Boyd, receiver Treylon Burks and tight end Hudson Henry.

Against Ole Miss last season, Woods and Trey Knox combined to make 12 catches for 172 yards. Woods has been consistent this year, but Knox needs to rebound from an off game at Auburn, including a drop on a two-point conversion pass.

Finally, Arkansas will face a defense that isn’t considered elite against the run, after taking on rushing defenses ranked No. 1 (Georgia), No. 5 (Mississippi State) and No. 41 (Auburn) in the nation.

The Rebels rank last among the 76 FBS teams who have played this season, allowing 303.3 rushing yards per game, and also an FBS-worst 7.34 yards per rush.

Ole Miss linebacker MoMo Sanogo referenced the Razorbacks’ defensive improvement when talking about how the Rebels can get better in season.

“It’s been a lapse of mental focus,” Sanogo said. “We need to be completely focused and locked in on our specific job every single play and go win one-on-one matchups.

“If we do that we can be a really successful defense. I heard Coach Kiffin say that a defense that was really bad last year is playing extremely well for Arkansas. It’s not about, ‘Oh this team has bad players, this team has good players,’ it’s about whether you perform and do your job.”

The Ole Miss defense is allowing a 64.3% conversion rate on third down, worst in the FBS by more than five percentage points.

“It don’t mean nothing to us because we haven’t done anything against Ole Miss this year,” Woods said. “So we haven’t made a yard against them this year. We still have to go out and earn every yard.

“It’s still an SEC team, just like every team. So we can’t go out taking anybody lightly. It’s all about us, so we just have to go out and execute.”