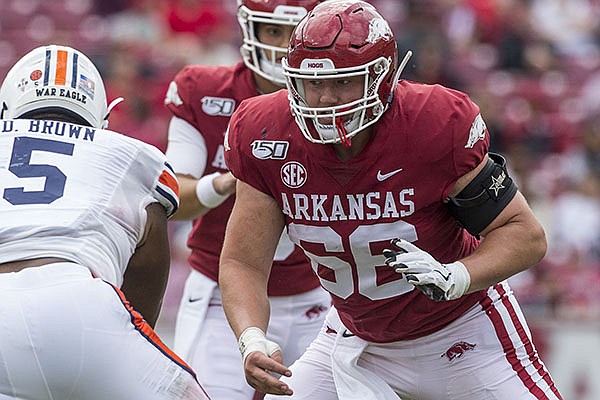 Offensive linemen Ty Clary and Dalton Wagner came off the bench to help spark Arkansas after its slow start on the Plains.

The duo’s resurgence has added to the improved offensive line, which Arkansas (1-2) hopes to put on greater display today against Ole Miss (1-2) at Reynolds Razorback Stadium.

Quarterback Feleipe Franks noted how hard Wagner and Clary worked to be ready for their latest opportunity.

“It’s super important, not just for them but for our team,” Franks said. “They put the team first. One was in quarantine. Not once did I hear either of those guys complain. My locker is right beside them, they don’t complain. They work their tails off to be the best players they can become.

“Their name was called and they came in and performed. That’s what it means to be on a great team, surrounded by great players that have the right mental aspect of it.”

Clary — sidetracked for the better part of three weeks during preseason practice due to a covid-19 contact tracing quarantine, then a separate illness — saw his first action of the season at Auburn.

The 27-game starter entered at right guard for Beaux Limmer midway through the second quarter, and the Arkansas offense scored on five of its next six possessions to take a 28-27 lead over the No. 13 Tigers with less than six minutes remaining.

Wagner, a 12-game starter at right tackle in 2019, earned his most substantial playing time of the season after coming in for the injured Noah Gatlin on the second snap of the game.

“I thought they both played really well,” Pittman said. “It was good to see them in there, man.

Wagner, a redshirt junior, and Gatlin were set up for a position battle in 2019 before Gatlin suffered a torn knee ligament early in training camp.

Wagner and Clary kept working early this season even with their reduced playing time.

“It felt great to be back in there,” Wagner said. “It felt good to help out the team in any way we could. Me and Ty were happy to get a shot, assist the team.

Wagner was particularly happy for Clary.

“He did a great job, I thought, when he went in there,” Wagner said. “He really moved some guys. It’s fun to play next to Ty. It’s a lot of fun.”

“Beaux, you know we had talked about getting Ty on the field,” Pittman said. “Ty had missed 20-something days from different situations in camp. And he’s been having really good practices, so we were planning on putting him in there at some point anyway because he had earned some playing time.

“We just played him, I think maybe in the second quarter, somewhere in there, all the way through the end of the game. Just gives us added depth. But nothing’s wrong with Beaux at all. We just decided to try something else, and Ty played well.”

Noted Franks, “With Noah going down — and he’s worked extremely hard in rehab and getting his body back — but I thought Ty and Wag did a great job stepping in. That just goes to the preparation throughout the week, being ready when your name is called.

“I thought they both did a really good job, Coach [Brad] Davis can attest to that. They came in and helped put us in a position to win. They did a good job paying attention during the week and coming in when their names were called.”