At least Morris was right about Catalon 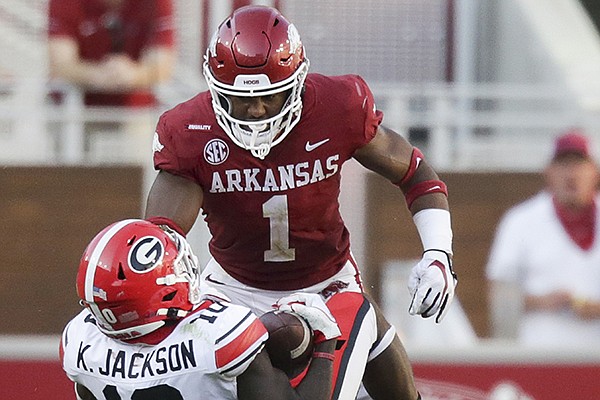 Turns out the former unsuccessful Arkansas Razorbacks coach now Auburn offensive coordinator successfully recruited perhaps one of the best safeties that Arkansas has ever seen.

For first-year Coach Sam Pittman’s Razorbacks, 2-2 after thwarting Ole Miss, 33-21 Saturday at Reynolds Razorback Stadium, Catalon already has made 45 tackles, forced a fumble, recovered a fumble, broken up two passes and intercepted one returned for a 35-yard touchdown.

Call Catalon a catalyst. A catalyst in Pittman and first-year defensive coordinator/safeties coach Barry Odom converting the pathetically porous 2018 and 2019 Arkansas defenses on consecutive 2-10 overall/0-8 in the SEC teams under Morris and defensive coordinator John Chavis into earning 2020 national renown.

Do credit Morris and Chavis with at least two positives. They recruited Catalon from Mansfield’s Legacy High School. And with interim coach Barry Lunney’s assist not playing him in the 2019 season-finale loss to Missouri, they preserved Catalon’s freshman status for 2020 under the rule invoked last year allowing a player playing a maximum four games which Catalon played and still redshirted.

Catalon the catalyst takes it from there. Tangibly and intangibly.

“Man he does everything!” Clark said during Saturday’s postgame. “He took me and Khari under his wing this week. He took us into watch film. He’s been a real leader for this defense.”

None so impacted the game as Catalon recovering Ole Miss quarterback Matt Corral’s first-quarter fourth down fumble on Arkansas’ first of two successful goal-line stands and especially Catalon corralling Corral’s first of six interceptions. Catalon returned it for the 35-yard pick-six for a 17-0 lead at 10:40 of the second quarter just 10 seconds after A.J. Reed’s first of two field goals.

“That ended up being a huge game shift,” Clark said. “He made a great play on the ball. He saw that crosser and just picked it off and had a free run to the end zone.”

A pick-six that Chad Morris could say he foresaw though not still at Arkansas to see it.