'He's all over the field': Catalon a rising star in Hogs' secondary 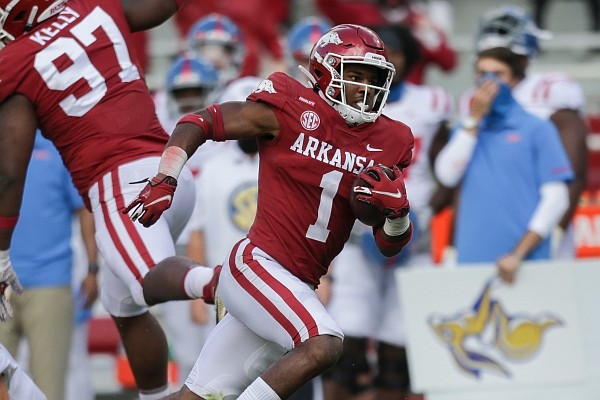 Arkansas defensive back Jalen Catalon (1) intercepts a pass resulting in a pick-six, Saturday, October 17, 2020 during the second quarter of a football game at Donald W. Reynolds Razorback Stadium in Fayetteville. Check out nwaonline.com/201018Daily/ for the photo gallery.

FAYETTEVILLE — Jalen Catalon saw nothing but green grass in front of him.

Well, green grass and Matt Corral. But the redshirt freshman made quick work of the Ole Miss quarterback, slipping past his half-hearted attempt at a tackle and cruising into the end zone for a tone-setting touchdown.

A native of Mansfield, Texas, Catalon returned his first career interception for a 35-yard score that put the Razorbacks up 17-0 over the Rebels early in the second quarter Saturday. For Corral, who entered Week 4 with only one pick to his name, it was his second interception in as many attempts.

“We were just in a zone coverage, just reading the quarterback and he rolled out and I read his eyes,” Catalon said Tuesday, recalling the sequence. “I just broke on the ball and made the play and had my eyes on the end zone and took it home from there. It was a great feeling.

“I credit my D-line because without them all the interceptions that happened that day wouldn't have happened, so credit to those guys and everybody else who did their job. I just happened to be in the right place at the right time. I made the play.”

Catalon made the play because that is what he knows to do. Razorbacks linebacker Grant Morgan labeled the safety a technician.

“Linebackers have a joke about him,” Morgan noted. “We call him Ironman because we always know he's going to be able to make us right if we mess up. Just be able to have that at that time of the game just shows that no matter what happened we were able to capitalize on their mistakes and we were just able to play our defense.

And the pick-6 wasn’t even Catalon’s first splash play of the day. He has a knack for the ball in those moments, teammates say.

On Ole Miss’ first series of the game, he recovered the first Rebels fumble of the season on fourth-and-goal. Against Georgia in Week 1, he forced a fumble that was recovered by true freshman Myles Slusher.

For those who have followed Catalon’s football career, such instances are customary. As a junior, he was named The Dallas Morning News' All-Area defensive player of the year after finishing with 101 tackles, three interceptions, six forced fumbles and five recovered fumbles.

And he was named the Texas Sports Writers Association Class 5A defensive most valuable player as a sophomore behind a 183-tackle, nine-interception season.

“He just has this savvy about him, like, he knows how to get to the football,” Razorbacks receiver Mike Woods said. “Like, every time you look up Jalen Catalon is making a play on the football. Either he got the ball or he stopped (the opponent) from getting it or something.

“He's just all over the field every time you look up.”

Saturday, he became the first Arkansas player to recover a fumble and intercept a pass in the same game since Will Hines at Auburn in 2012. Catalon currently leads the team with 29 unassisted tackles.

He is quick to credit teammates and coaches for lifting his play each week. Defensive coordinator Barry Odom and cornerbacks coach Sam Carter have instilled confidence in not only him but the entire secondary.

“That's what Coach Carter stresses to us: if you don’t believe that you're the best secondary, then you’re in the wrong room,” Catalon said. “And you can see that in the way he coaches us and the way that he prepares us. … I think that just makes us want to go even harder and go even more because we know he has the full belief in us.

“He sets a good plan for us, too, in the back end, along with Coach Odom’s plan, and we just kind of shake that up and we see what it does Saturday. So far it’s just been nothing but success right now.”