Diamond Hogs have army of arms 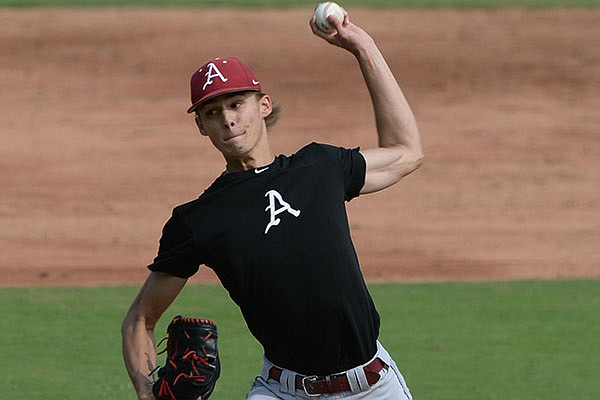 FAYETTEVILLE — Running out of arms won’t be a problem as the University of Arkansas baseball team resumes its intrasquad World Series with game four at 3 p.m. today at Baum-Walker Stadium.

There are a combined 30 pitchers on the rosters, with 15 each for the Black and Red teams. Through three games, there have been 24 pitchers used.

“I feel like that as far as pitching competition, it’s been second to none,” Razorbacks Coach Dave Van Horn said before the series started. “You’ve got guys that were conference starters two years ago and last year that are battling to try to get on the mound and start.

“Which is a good issue, a good problem for us, because it gives us depth and competition amongst teammates probably that can really, really push your team forward.”

Connor Noland and Patrick Wicklander — both sophomores with the NCAA restoring eligibility for athletes in spring sports — were SEC starters in 2018 and were set to be in the rotation for last year’s conference opening series at Mississippi State before college sports were shut down due to the coronavirus pandemic.

“Guys feel like they’ve got to continue to work hard and stay dedicated every day, or they’re going to lose their job,” Van Horn said. “It’s going to be tough to figure out who we’re going to travel with on our pitching staff, because when you get past number 10 or 11, there’s a lot of good pitchers there. They just need an opportunity, I think.”

The pitching staff will be deeper in 2021 because the 2020 Major League Baseball Draft was cut from 40 to five rounds.

“Because of the shortened draft, we got some older kids back,” Van Horn said. “We also probably might have kept a player or two who came out of high school or junior college, maybe three.”

Noland started for the Black team in its 15-8 victory in the series opener and allowed 5 runs, 7 hits and 1 walk in 2 2/3 innings, but had 5 strikeouts. Despite Noland’s struggles in that game, Van Horn said he has pitched well overall this fall.

“Connor is doing really well,” he said. “Really strong and throws a lot of strikes. He’s not our clear No. 1. We don’t have a clear No. 1 yet. He’s just one of many that are really good.

“I wouldn’t say he’s taken a step back, but I’m not going to tell you he’s throwing 95 [mph] either. But he sure is pitching well.”

Van Horn said the if the regular season started now, Noland probably would be in the rotation.

“He earned that right,” Van Horn said. “But I think he realizes there’s a lot of competition, and it’s making all these guys work.”

The Red team won the second game 11-0, and the Black team won game three 9-7 on Monday.

A combined 50 runs in three games might raise questions about the pitching, but freshman infielder Robert Moore said the scoring total can be deceptive.

“Our strength is our pitching staff,” said Moore, who is 3 for 12 in the series with 2 home runs. “One thing that I think that’s going unnoticed right now is, yes, the hitters are hot and we’re not missing pitches, but we’ve faced all of our pitchers all fall.

“So you really start to rack up data in your mind and bring confidence into each at-bat when you face these guys. It’ll be a lot harder for teams in the spring to hit off our pitchers.”

Peyton Pallette, a freshman right-hander from Benton, pitched two perfect innings for the Black team Monday and had two strikeouts.

“I felt great,” Pallette said. “My fastball and curveball were working really good. I could throw my curveball in any situation in the count. I was locating really well with my fastball.”

Pallette said his fastball velocity has been as high as 97 mph.

“Fall’s been good,” he said. “I had a rough start, but I think I found my rhythm. I’ve been pretty calm and relaxed.”

“He has a plus changeup. He has a really good curveball when he’s got it going. He has a chance to be a starter here as a freshman. We haven’t had too many of those over the last 10 years, but then again, if you’re the best or you’re hard to hit …

“He’s quick to the plate, he can manage the running game. Really, to me, it’s not about the athletic ability with him or the talent of being able to throw that baseball. It’s more about just if he’s mature enough to handle it as a freshman at this level, where our program is. But he’s deserved that opportunity to start.”

Van Horn said Wohlgemuth has a tremendous arm, but he has been sidelined because of covid-19 and an ankle injury.

“He has starter potential as a freshman,” Van Horn said. “He’s got to try to play catch-up right now because of the innings lost this fall where he can be ready to go and get after it come spring time on that mound.”

One pitcher the Razorbacks won’t be using is Hunter Milligan, who would have been a redshirt sophomore this season. Van Horn said the left-hander from Greenbrier suffered another shoulder injury.

“He’s done,” Van Horn said. “He came in the other day and talked to us. He had surgery in high school and a couple since then. Now they are saying he needs to have another one.

“I think he’s about had enough of it, and I don’t blame him. What a great kid, too. I feel bad for him.

“He never got to show us what he could do here. What a talent coming out of high school as a young player. Really heartbreaking, honestly.”