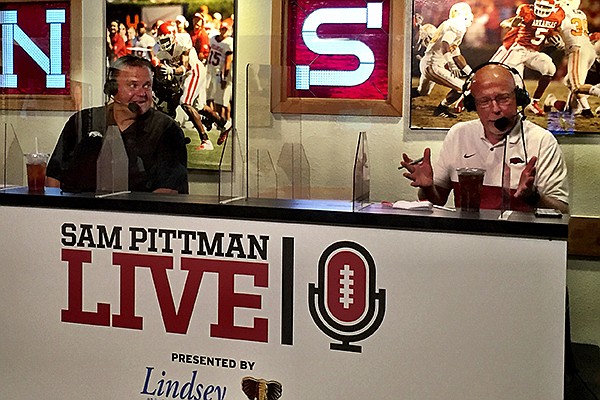 FAYETTEVILLE — It is forecast to be clear Saturday night when Arkansas is scheduled to play No. 8 Texas A&M at Kyle Field in College Station, Texas.

Indoors was the only place the Razorbacks could find those conditions in Fayetteville in this week's practices leading up to the game. Arkansas has practiced at the Walker Pavilion each day since Monday as a cold rain fell outside.

“The only unfortunate thing is we haven’t been able to go outside this week,” Arkansas coach Sam Pittman said Wednesday during his weekly radio show at the Catfish Hole restaurant. “We just felt like we’d have better practices staying in. Hopefully there's a chance — a small chance — we can go outside tomorrow.”

Pittman credited the designers of the Walker Pavilion, the full-scale indoor football field that was built in the 1990s and was one of the first of its kind in the SEC.

“They built it right,” he said.

Pittman said the team can do everything indoors that it can outdoors, with the exception of punting.

“Those poor (punters) have got to go outside,” Pittman said. “They’ve got to give it up for the team. They have punted this week, just not indoors.”

Being inside has had its perks this week, primarily to simulate crowd noise the Razorbacks expect to hear at Kyle Field. Texas A&M has recorded the SEC’s two largest announced attendances at a football game this season, including an announced 24,709 for a game against Florida on Oct. 10. Some have disputed that figure, claiming it was much larger.

Pittman said he expects around 50,000 fans to be in attendance at the stadium that has a listed capacity of 102,733. The Razorbacks have piped in crowd noise and had the Aggies’ fight song blaring each practice this week.

“We talked about the crowd noise and we wanted to fix that problem quick, fast and in a hurry,” Pittman said. “We had crowd (noise) last week and this week. I don’t believe it will be a problem.

“We’ve handled that well this week.”

Pittman reiterated Wednesday earlier comments that crowd noise was not much of a factor in the Razorbacks’ first two road games at Mississippi State and Auburn.

“I do believe this will be our first game on the road…where we’ll feel like it’s a road game,” Pittman said.

“We're trying to act like we're there. We have crowd noise, we're playing their fight song and we’re trying to already be there with our mind.”

Arkansas’ primary objective Saturday is to stop a Texas A&M rushing attack that is led by running back Isaiah Spiller, who has rushed for more than 100 yards in all three of the Aggies’ victories.

“Spiller really is playing well,” Pittman said. “He had 173 yards rushing against Florida and is playing exceptional.”

Pittman also praised the play of Texas A&M senior quarterback Kellen Mond, who has led an efficient offense that ranks fifth in the SEC in total offense despite taking the league’s third-fewest number of offensive snaps. Mond is completing 61.5% of his passes, has thrown nine touchdowns to two interceptions, and has not been sacked since the season opener against Vanderbilt.

“He’s playing fast, the receivers are getting open and the offensive line is doing a good job of protecting him,” Pittman said. “This is the best I’ve seen him. He's confident. He doesn’t have as many rushes this year, which means he’s living in the pocket, throwing deep balls and really having a fine year.

“We need to get pressure on Kellen with three rushers and make sure we can try to contain him when he gets outside the pocket.”

Pittman said he is excited about the game plan assembled by Arkansas defensive coordinator Barry Odom.

“We have multiple sizes of guys, therefore we can play several different fronts, several different packages on the back end,” Pittman said. “Barry will go a whole game of not blitzing one time, then he'll go a game where it seems like he's blitzing twice in one play."

Defensively, Pittman said the Aggies also present a challenge that he experienced firsthand while the offensive line coach at Georgia last season. The Bulldogs won a close game 19-13 last November.

“They gave us problems up front…that were problematic during the game,” Pittman said. “Their back end is very aggressive. They're big, physical and fast."

The recent time off has given Arkansas’ players a chance to get healthy, Pittman said.

“I think we’re close to full tilt besides the kids who had season-ending injuries,” Pittman said, and indicated most previously injured players will be available Saturday.

Defensive end Dorian Gerald has practiced this week, but he is questionable for the game Saturday. Gerald hasn’t played since suffering an ankle injury during the first half of the season opener against Georgia.

“We just don’t know what percentage he’s going to be of full,” Pittman said.

Among those who have benefitted from the rest is running back Rakeem Boyd, who injured his ankle during the Razorbacks’ Week 2 game at Mississippi State, missed the following week’s game at Auburn and was limited in his return against Ole Miss.

Boyd spent his freshman season at Texas A&M and grew up in Houston, about 100 miles from College Station.

“I think health-wise he’s as healthy as he’s been all year,” Pittman said. “I don’t believe he has been healthy since the beginning of the Georgia game, but I think he’s ready to have a good game….I think it means something to him going back to Texas, being around his home.”

Pittman hopes the Razorbacks’ offense will be able to play a more physical game against the Aggies. Arkansas has struggled at times in short-yardage situations, although it did have a key conversion with Boyd’s 1-yard touchdown run in the first quarter against Ole Miss.

“We can’t just turn around and say we’re going to bully you into the end zone,” Pittman said.

“We’re not a big, physical team yet to say, ‘We’re going to give it to this guy. What are you going to do about it?’ I think we’ll become that team.”

To this point the team has been most physical on defense. Pittman credited safety Jalen Catalon with establishing a physical presence early in the Ole Miss game with a big hit on star receiver Elijah Moore, a fumble recovery near the goal line and an interception return for a touchdown — all in the first 20 minutes of game time.

“It’s like the fights. If you sit around and wait on the other old boy to throw a punch, he might knock you out; you probably ought to throw the first one. That’s what we try to do, what we talk to our kids about, that we’re going to fight, so let’s throw the first punch and see what happens.”

Catalon joined the show via telephone and said the team is looking forward to measuring itself against a string of strong teams in the final six weeks of the season.

“Our goal is not to win two games. We’re trying to win the whole thing from here on out,” Catalon said. “We don’t want to lose again. I think that’s the mentality that has been built throughout the program.

“I think we’ve got our respect, now it’s time to go finish out the season and win these games.”