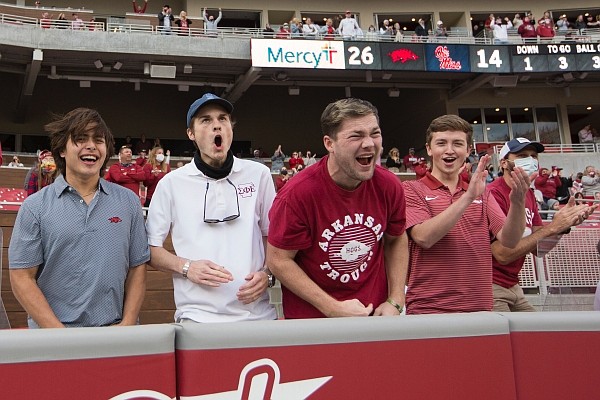 Selected comments by Razorbacks fans on the message boards at WholeHogSports.com:

nlrbuzzard: It may be more like living on borrowed time. Auburn faces Tennessee, LSU, A&M and ‘Bama in the second half of their schedule. If they go 6-4 the seat will be hot, any worse and it might be boiling.

kenhog: This officiating error pattern to Auburn’s benefit in consecutive weeks is ridiculous. And fining (Ole Miss coach Lane) Kiffin for pointing out the error they admitted is salt in the wound.

razorwill: …No fan of Kiffin but glad he called them out. Call it what it is, inept officiating or outright cheating.

hogsrus: Got to give it to Kiffin. He knew he was going to get fined when he told the truth … Auburn is paying off someone or they are putting horseshoes on that Eagle.

jhawg: It did not bother me one bit that Ole Miss got jobbed. I rather enjoyed it. I hope they go 0-10.

dfarris: There is absolutely no doubt that during the off season the SEC needs to address poor in game officiating and contract out the SEC game day review duties to a source that has zero bias or prejudice.

hogbacker: I no longer know why we review plays. I once thought it was to make sure the right call was made. Obviously that’s not what it is. Unbelievable!

tennhawg: If Gus Malzahn doesn’t get fired this offseason, he should donate half his salary to the SEC officials…

Hawgslobber: The reviewers have won more games for Auburn this year than Gussie has!

hogstetrician: Apparently Lane Kiffin has in mind to pay his $25,000 fine in pennies to the SEC office. Yesterday he tweeted, “Where can I find 25,000 pennies?” (Oops, got the decimal point in the wrong place, Lane.) Then he tweets the correction, “…250,000 pennies.”. (Wrong again.) Finally he gets the math right with the tweet, *2.5mill.”

grtpignthesky: I’m definitely glad we have Coach Sam Pittman. But, the troll job Kiffin is doing on the SEC is hilarious. And, I think the more national attention that is brought on the ineptitude of SEC refs can only be a good thing. They won’t change anything until it’s embarrassing enough they have to.

jhawg: Kiffin is a character. He is having fun with the SEC and the bad referees. I like it, even if it is Ole Miss.

tuschhawg: Respond to him he can get half of those pennies from Arkansas fans, gladly. I don’t follow Twitter, but I imagine plenty of people on social media had a field day with that yesterday. Just another reason I’m so glad we have Coach Pittman.

coloradohog: Was thinking about what he said first the other day. The coaches that have done well or at least not completely stunk it up were ones that wanted to be here and understood our culture. Frank Broyles fits that in a big way. Lou Holtz wanted out of the NFL. He had success early on (with Franks players), but it went downhill over time. I think he did not get our culture more than anything. Ken Hatfield was one of us and did well. The next that fits was Houston Nutt. He was certainly an improvement over those guys before him. Then we had a series of guys that I think wanted a paycheck and perhaps a stepping stone. That brings us to Sam. Can’t say what he will do long term, but I sure like the start. I liked him from his opening introduction when he was so overcome that he could not even speak. He was anything but slick, but there was no doubt he wanted to be here and understood. Makes you really root for the guy and it is obvious it makes his players want to play for him.

guynhawaii: My favorite CSP quote was the players didn’t select him but he wanted to be their coach (words of that affect).

jhawg: After watching how A&M ran the ball so well against Florida in that second half, I think they will try to do the same against us. … Do we have the manpower to stop a physical running attack? …I think it will be a physical game for our defense. I guess we will see if Barry Odom has any more pixie dust in his jar. If Odom can stop the Aggies, and we can win…he may get his face chiseled into one of those rocky cliffs along I-49.

bluegrassrazorback: Well I’ve been waiting for the Arkansas defense to collapse … but they haven’t. … I think I’m suffering form “Pavlovs Dog syndrome” after so many years of snatching defeat from the jaws of victory and lack of preparation, grit and heart, I just expect them to lose. I’m seeing an Old School Razorback renaissance and I couldn’t be happier. … Win or lose (and I so hope the Razorbacks beat Texas A&M) if these Razorbacks fight to the end I will be happy. Razorback football is fun.

youdaman: TA&M will have the best offensive line we’ve seen and we will to have seven in the box to hopefully stop them from dominating us on the ground. They are experienced and play very well together. We have our hands full.

DawgHOG: Better than the Georgia o-line? I agree they will run right at us and that will be the key to this game. Stop the run on first and second down make them have to throw in long yardage situations. Our offense should be 100% with Rakeem Boyd having another week, and Burks also.

daboar: They have a balanced offense; we’ve been good against more one-dimensional offenses. It’ll be a tough game on the road. But, it’s another game whereby we need to limit the number of big plays. Do that, and we’ll stand a good chance in the fourth quarter.

holdenhogfield: A&M better have a good OL, because we suddenly have a good defensive line. And linebackers. And secondary. Hard to believe that I’m typing this and not laughing out loud or attaching a sarcasm emoji!

swinebeforepearls: I can relate to what you’re saying, Holden. I’ve watched the ole Miss replay twice now and I still have to pinch myself to make sure I’m not dreaming. The transformation I thought would take four years seems to have happened in four games, and I’m treasuring every second of it!

jimbeau77: I trust Odom and the defensive unit have plenty of time during this two weeks to thoroughly study A&M game film. Preparation and more healthy players to utilize we should be fine.

Score predictions for the game Saturday in College Station

youdaman: Texas A&M, 33-20. Great OL and power run team will be tough for us to stop. Hope I’m wrong but we are giving up 178 yards a game and over four yards a carry.

georgiahawg: It would be fitting that this game goes to a second overtime. Hogs get their first win in the series since 2011. Catalon and Hudson Clark each get a pick and one of those goes for six. Arkansas 37, TA&M 34.

cody: I have predicted scores twice now. I have picked our opponents both times and been wrong both times. So, with that said… TAMU wins this one, 31-28. Our offense isn’t hitting on all cylinders yet, Special teams haven’t played a complete game yet and we are a little undersized to stop their big OL and running back. Kellen Mond decides to run again and we wear down at the end.

jimbeau77: We have played them close with worse coaching in the past. Arkansas 27, aTm 24.

coloradohog: I go with a lot of what I have read above. We have yet to really stop a strong running game. Auburn and Georgia ran pretty much at will. I see something similar this game. We will fight hard, but wear down. aTm 38, Hogs 17.

swinebeforepearls: Porkers 38, Aggies 27. Special teams get with the program this week.

bushhog: We win. Number of female cheerleaders: Arkansas — Many; A&M — None.

razorwill: Agree with colorado. Big, experienced offensive line and a good running back behind them. I didn’t think Georgia ran at will against us but Auburn did. Need all hands on deck. … Aggies 24, Hogs. 17.

armyhog: Well, I’m a Hog fan! Hogs 35, Aggies 14. Jim Bo blows a gasket when the refs put the screws to Aggies in the replay both.

jhawg: Razorbacks 24, Aggies 34. Going down to the middle of cow country and beating a team which has superior manpower is a tall order. I am tired of having to pick our opponents to win every week, but this would be a great win even if it is not against a great team. I think they just run the ball against us, and we can’t stop them.

lilhawg: I’m so tired of … the Aggies, but realistically I just don’t think we have enough to overcome their strengths on offense. We play tough, but lose a close one, 27-21.

stillgreghog: Hard to believe we haven’t beaten A$M since 2011. Wow. They were never someone I was scared of growing up. Don’t get me wrong, I didn’t have them down as a pretty much automatic “W” like I did Rice or TCU, but I did expect to beat them. Hogs 31, Aggies 27.

holdenhogfield: I don’t know how and I don’t know why, but 28-24 Hogs. I believe in Sam! And I love that score.

longtimehog: Love where we are going, but this is a bad matchup for us. A&M 31, Arkansas 10

tennhawg: 27-24, but I’m NOT going to pre-set a loss for The Razorbacks so I feel the score is accurate. Just not sure which is which. I do know one thing for sure and that’s as long as A&M doesn’t have the Auburn refs with them we have a 50/50 chance!