Saban finally gets his wish with scheduling 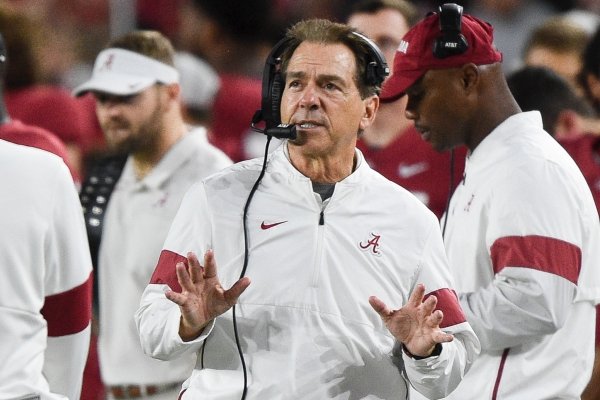 Alabama head coach Nick Saban reacts, Saturday, October 26, 2019 during the second quarter of a football game at Bryant-Denny Stadium in Tuscaloosa, Ala.

14th in a series previewing the 2020 SEC football season.

The No. 1 Crimson Tide were preparing for Tennessee-Chattanooga, and during the SEC coaches teleconference on Nov. 16, Saban was asked the benefit of playing a FCS team.

After Saban duly praised Tennessee-Chattanooga — which Alabama beat 31-3 — he pitched the idea of playing more than eight SEC games and making all nonconference games against Power 5 teams.

“I’ve always been an advocate of playing all Power 5 schools,” Saban said. “I think we need to have more really, really good games on TV and for the players. And we can’t have fans pay a lot of money for tickets and boxes … for games that no one is interested in watching.

“Now, I’ve heard [SEC Commissioner] Greg Sankey talk about the fact that we don’t want to play nine SEC games, but I’ve always been an advocate of playing nine or 10 SEC games and a couple other games against some other good opponents that everybody would be happy to watch.”

Saban didn’t let it go before last season, either, in an interview with ESPN.

Saban finally is getting his all-Power 5 schedule.

Just not in the way he – or anyone else – ever could have envisioned.

SEC teams are playing a 10-game conference only schedule this season in response to the coronavirus pandemic.

The opener for SEC teams is Sept. 26, rather than today as originally planned. The schedule was pushed back to allow schools and teams some extra time to deal with the pandemic after students began arriving on campus.

“I’ve been a guy that’s been wanting to play 10 SEC games for a long time, so this year we get to do that,” Saban said in August when the revised schedule was released. “I think it’s good for our players who get the opportunity to create value against 10 really quality opponents in our league.

“I think it’s going to be very challenging, because every week you’re going to have a very, very good opponent. I think it’s good for the fans. Hopefully, it will create a lot of interest.”

Alabama already was scheduled to play Georgia in the regular season for the first time since 2015, but when the SEC added two conference opponents, the Tide didn’t get Florida as well. Missouri and Kentucky were new additions to Alabama’s schedule.

“I looked at this schedule, and I think they did it as fairly as possible,” Saban said.

Alabama, which opens at Missouri, is ranked No. 3 in The Associated Press preseason poll behind Clemson and Ohio State.

The Big Ten isn’t playing football, to start the season at least, which helps increase the chances Alabama will make the College Football Playoff for the sixth time in seven years.

Alabama failed to make the playoff last season when it lost to eventual national champion LSU 46-41 and Auburn 48-45.

The Tide suffered injuries to some key players, but losing two games in which Alabama scored more than 40 points resulted in plenty of criticism from fans for defensive coordinator Pete Golding.

“I’ve got to do a better job in meetings and at practice and everything else,” Golding said recently. “That is not acceptable. You’re either coaching it or allowing it to happen.

“So, we’re doing a better job of monitoring those things, putting them on tape, showing them every day, ‘Look, this is it. This is who we are. This is who we’re not, all right.’ And then obviously getting those guys to do it the right way, and that’s what I told them at the start of this camp.”

Junior linebacker Dylan Moses, who missed last season with a knee injury, is back at full speed. He had 86 tackles in 2018.

“Getting back out there I felt really good,” Moses said after the first practice. “I just need to keep getting better as far as developing that feel for being on the field again since it’s been a while.”

Moses was asked about the possibility of making the playoff in the midst of a pandemic.

“Honestly, I’m really focused on one game at a time,” Moses said. “Especially with my guys. I try to get them to understand that even in practice you’ve got to focus on one play at a time.”

Running back Najee Harris, a senior who rushed for 1,224 yards and 13 touchdowns last season, is back to lead the offense.

Junior Mac Jones, who started four games last season when Tua Tagovailoa was injured, is expected to take over at quarterback.

“I just think that Mac’s got to play within himself, be confident, be positive, not beat himself up when he makes bad plays,” Saban said after the Tide’s first scrimmage. “And that’s part of the maturity level of a competitor that his game experience is going to help him do, and I think his experiences leading up to the game will help him do as well.”

Jones will have plenty of talented receivers as targets, led by senior DeVonta Smith (68 catches for 1,256 yards and 14 touchdowns last season) and junior Jaylen Waddle (33-560, 4).

Saban was asked Wednesday what he believes will be the personality of this team.

“I just think it’s too early to call,” Saban said. “And with the circumstances being as they are, and the unknowns and doing things differently, like we’ve had to do things, it’s different for players and is different for coaches.

“I don’t know if I’ll be able to answer that question until we play.”

Play the first of 10 SEC games.

SEC WEST TITLE SCENARIO After making the College Football Playoff the first five years of its existence, Alabama found itself on the outside looking in last season because of high-scoring losses to LSU and Auburn. Saban, the Tide and their fans had to settle for an 11-2 record and a Citrus Bowl drubbing of Michigan. There’s a lot of uncertainty about this season because of the coronavirus pandemic, but it’s tough not to favor Alabama with Saban at the controls.