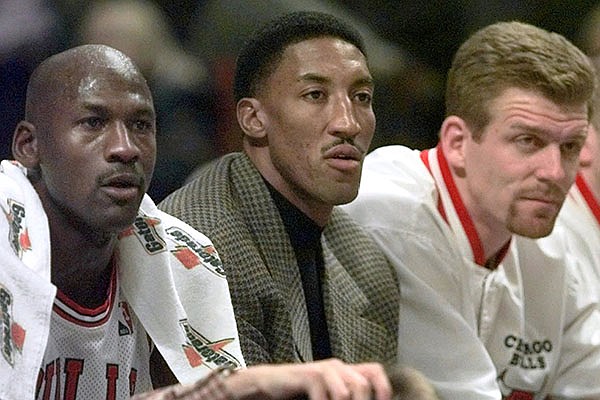 FAYETTEVILLE — After beginning his NBA career with the struggling Sacramento Kings, Joe Kleine went on to play with several Hall of Famers and for teams that made 10 playoff appearances.

Being a backup on winning teams, Kleine said during a recent interview, outweighed starting and putting up better individual statistics with a losing franchise.

“I liked being on good teams, because good teams just had a happier atmosphere,” Kleine said. “Life was better.”

The NBA life for Kleine, a 7-foot center who starred for the University of Arkansas, lasted 15 seasons and was highlighted by a 1998 championship with the Chicago Bulls. He played 965 regular-season games for seven franchises with 204 starts. He also was in 50 playoff games with 11 starts.

Kleine’s longevity puts him at No. 9 on the Arkansas Democrat-Gazette’s list of top Razorbacks in the NBA.

“I never expected to play 15 seasons in the NBA,” said Kleine, who is 58 and co-owns two Corky’s barbecue restaurants in Little Rock and North Little Rock. “I can’t fathom how lucky I was. Fortunately, I never had any major injuries.”

In Kleine’s third season, he made 60 starts and averaged career-highs of 9.8 points, 7.1 rebounds and 24.4 minutes, but the Kings finished 24-58 and 10th in the Western Conference for the second consecutive season.

Sacramento was on its way to a 27-55 record and another 10th-place finish when on Feb. 24, 1989, Kleine was traded with Ed Pinckney to the Boston Celtics for Danny Ainge and Brad Lohaus.

Kleine had plenty of reason to celebrate because the trade came on the same day his wife, Dana, gave birth to the couple’s son, Daniel.

“I’d had four coaches in 3 1/2 years in Sacramento, and probably more than 30 different teammates,” Kleine said. “There was no guidance from management. They couldn’t make up their mind about what they wanted to do. They couldn’t stick to a plan. They didn’t know what they were doing. It was really dysfunctional.”

Boston had won 16 NBA championships at the time of the trade.

“When I got to Boston, it was very clear-cut, ‘We’re trying to win, and we don’t care about anything else,’ ” Kleine said. “That was very refreshing.”

Kleine twice scored his career-high of 23 points for the Kings against the Los Angeles Clippers during the 1987-88 season, but Sacramento lost both games. He scored 19 or more points in his career 11 times, but the Kings finished 4-7 in those games.

Kleine was used to winning at Arkansas, where in three seasons he helped the Razorbacks to a 73-24 record. He also played on the United States gold medal-winning team at the 1984 Olympics.

“When you’re losing like we did in Sacramento, no matter how many points you score, it’s miserable,” Kleine said. “It’s every man for himself.”

Kleine’s Hall of Fame teammates in Boston were Larry Bird, Kevin McHale and Robert Parish. The Celtics made the playoffs in all five of Kleine’s seasons with them.

“I tell everybody I was like a person who was on call,” Kleine said. “That was my role with the Celtics.”

“I didn’t play consistent minutes, but when I did play because Robert or Kevin or Larry were hurt, I always had good numbers,” he said. “They weren’t Hall of Fame numbers, but they were good numbers.

“I might play 25 or 30 minutes for four or five games as needed, then the next seven I might play five minutes a game. That was my lot in the NBA, and I accepted it.”

“I tried like hell to be a big-time All-Star,” he said. “I worked as hard as anybody and put in the hours. But I wasn’t good enough to be that type of player in the pros.”

Darrell Walker, a longtime NBA player and coach, said it’s not hard to explain why Kleine played so long.

“Some guys can never figure out what their job is in the NBA,” said Walker, a former Razorback player and the current coach of the University of Arkansas at Little Rock. “Joe figured out, ‘I’m not going to average 20 points a game. My job is to come in and make open shots if I get them, make my free throws, rebound the ball, protect the rim and guard my man.’

“That’s what Joe did for 15 years, and it’s why teams kept wanting him on their roster. Plus, he was a good teammate, a good guy to have in the locker room.”

Former Razorback Oliver Miller was Kleine’s teammate with the Phoenix Suns during the 1993-94 season.

“Joe was a great guy with a great attitude and great work ethic,” Miller said. “Whatever you asked Joe to do, he was going to do his best. If he wasn’t playing as much as he’d like, he didn’t get disgruntled or upset. He just kept working hard and doing his best.

“He’d talk to other guys if they were upset and help settle them down.”

In addition to Bird, McHale and Parish, other Hall of Famers Kleine played with were Charles Barkley and Jason Kidd with the Suns; Kobe Bryant and Shaquille O’Neal with the Los Angeles Lakers; and Michael Jordan, Scottie Pippen and Dennis Rodman with the Bulls.

“Larry was my favorite because I was with him almost four years,” Kleine said of his superstar teammates. “We had a lot in common.”

Kleine was from Slater, Mo. Bird was from French Lick, Ind.

“We are both smalltown, country kids,” Kleine said. “We hit it off pretty quick and easy.”

Kleine said he also has enjoyed a long friendship with Barkley, who is on the “NBA on TNT” show.

“How can you not love Charles?” Kleine said. “He’s just a great guy and funny dude. He was very comfortable with himself, and he made you feel comfortable as his teammate.

“Charles will take a jab at me on TV every now and then or text me something funny.”

Kleine said he knew he was joining a great team when he signed with the Bulls for the 1997-98 season, but he was surprised Jordan, Pippen and Coach Phil Jackson were feuding with General Manager Jerry Krause.

“I didn’t know about all the turmoil they were having was so deep,” Kleine said. “But we were winning, and I was around great players who were good guys. The coach was a good guy.

“It wasn’t Shangri-La, but it was damn sure better than Sacramento.”

On Aug. 31, 2000, the Portland Trail Blazers traded Kleine and Jermaine O’Neal to the Indiana Pacers for Dale Davis. At the time, Kleine already had made plans to retire and live in Little Rock.

“My last year in Portland, practices were harder,” he said. “I didn’t play very much, but even the little bit I did, my body was giving out.

“I was just getting old. It’s a young man’s game. I kind of wanted to go out on my own terms. About halfway through that year, I told Dana it was time for me to retire.”

Kleine said he was thrown into the trade so the salaries of the players involved would be within the numbers needed for NBA approval.

“The Pacers needed me to sign a minimum contract,” Kleine said. “The deal wouldn’t work unless I did that. So I signed with the Pacers, and then later they waived me.”

“The best thing about it was, I played 15 years but I got paid for 16,” he said. “The Pacers actually wanted me to come play for them. But we had already moved to Little Rock. My kids were in school. I hadn’t picked up a ball in three months. I was in great shape for a human being, but was in awful shape to be an NBA player.”

Kleine said he enjoyed his NBA career, especially all the friends he made, but that he’s glad he never became satisfied with being a role player.

“If I hadn’t always worked the way I did, I don’t think I ever would have played as long as I did.

“I was very lucky to come from Slater, Missouri, and play 15 years in the NBA. I didn’t see that one coming — at all.”