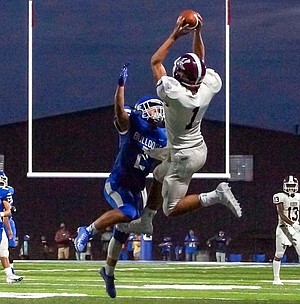 Stuttgart sophomore athlete Jaidan Strange’s athleticism has stood out since junior high, and Ricebirds football opponents are starting to see that.

“I think as an eighth grader he tripled jump like 44-2,” said Stuttgart coach Josh Price. “He would’ve won the state track meet in high school.”

Strange, 6-1, 170 pounds, won the high point award two springs ago at a track meet in Conway that featured teams such as Conway, Russellville. Price believes Strange has recorded a sub-11 second time in the 100 meters.

“He looks the part for sure and he's just a 10th grader,” McGhee said. “He’s very smooth and effortless looking. He makes regular plays look simple.”

Strange, who plays quarterback, receiver and defensive back, is on Arkansas' radar. He has the ability to play either side of the ball in college.

“I think he’ll play defensive back or wide receiver at the next level,” Price said. “At corner, he is phenomenal. He can mess up and he’s so fast he just covers them. I think he’s the best chance we have for a Division I player because of his size and speed.”

His outstanding athleticism is matched by his attitude.

“He’s so coachable. That’s what’s so great about him,” Price said. “He’s a great kid and he listens to everything. He’ll try and run through the wall if you ask him to.”