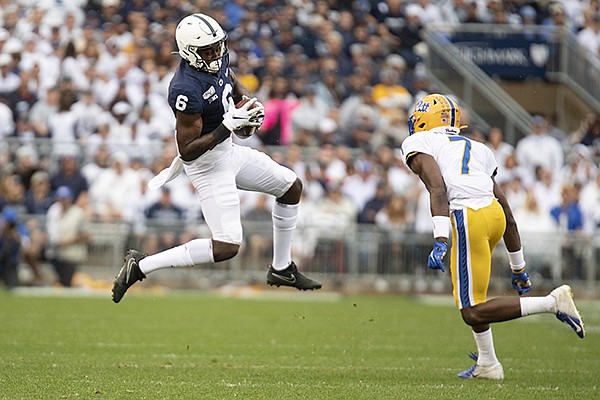 In this Sept. 14, 2019, file photo, Penn State wide receiver Justin Shorter (6) attempts to catch a pass as Pittsburgh defensive back Jazzee Stocker (7) defends during an NCAA college football game in State College, Pa. The former Penn State is eligible to play for No. 8 Florida this season. The Gators say the NCAA has granted Shorter’s request to waive a one-year transfer rule. (AP Photo/Barry Reeger, File)

The Gators confirmed Friday that the NCAA granted Shorter's request to waive a one-year transfer rule, meaning he doesn't have to sit out the 2020 season. Scholarship players in the Football Bowl Subdivision are required to sit out one year after changing schools, but the rule can be set aside because of a “specific, extraordinary circumstance."

Shorter left Penn State last November and entered the NCAA transfer portal. He landed at Florida three months later. He announced on Instagram late Thursday that his waiver had been granted.

Shorter caught 15 passes for 157 yards in two partial seasons in Happy Valley. He was ranked as the nation's top receiver coming out of South Brunswick High School in Monmouth Junction, New Jersey, in 2018.

His freshman year at Penn State was slowed by injuries, and his second season started with weight issues. Coach James Franklin said in spring 2019 that the 6-foot-4 Shorter, listed at 235 pounds, was “a cheeseburger away from 250.”

He was listed at 220 pounds when he signed with the Gators in February.

“The great thing (is) you have a veteran guy like Justin Shorter doing an unbelievable job," Mullen said. "He was there kind of leading the way. It was great for him, great adjustment for him being an older, veteran guy getting in there while those guys were gone and really showed what he can do.”

Shorter's immediate eligibility should bolster a receiving corps that lost four of its top six pass-catchers from 2019. Van Jefferson, Freddie Swain, Tyrie Cleveland and Josh Hammond are all on NFL rosters.

The Gators are still expected to feature Grimes, Toney and tight end Kyle Pitts this fall. Shorter certainly will be in the mix, and Texas transfer Jordan Pouncey could join the rotation.